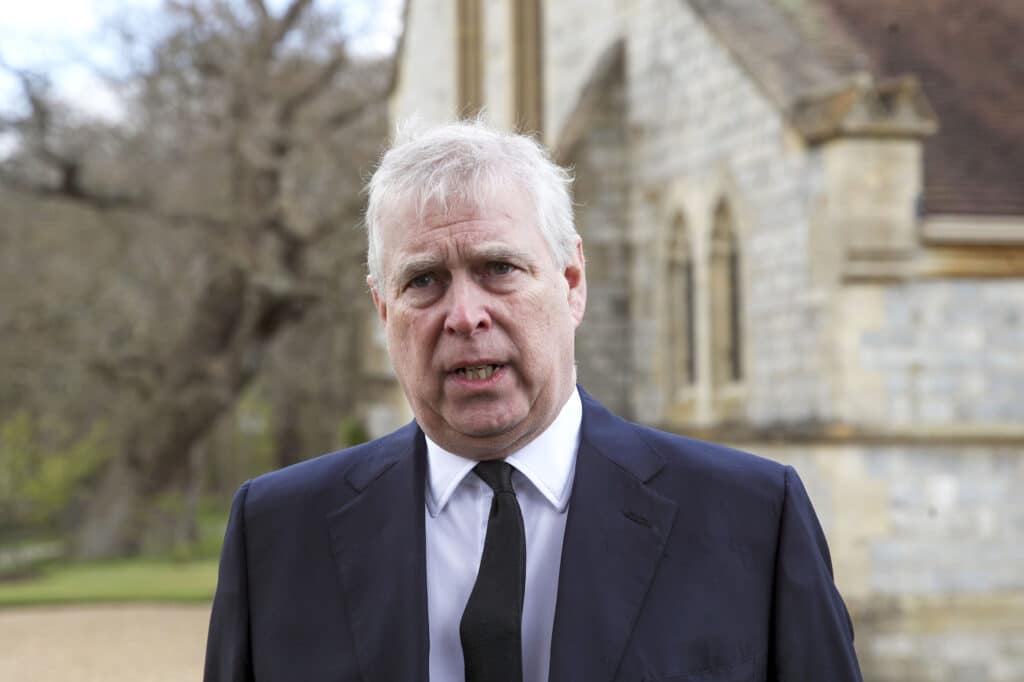 Due to increasing publicity and legal battles related to alleged sexual misconduct by Prince Andrew, Buckingham Palace is stripping him of his honorary military roles. He was also lose his royal patronages and cannot use the title “his royal highness.” The Associated Press has the story:

LONDON (AP) — Prince Andrew has been stripped of his honorary military roles as the growing furor over allegations that he sexually abused a teenage girl trafficked by the late financier Jeffrey Epstein threatened to taint the House of Windsor.

Buckingham Palace said late Thursday that Queen Elizabeth II had also agreed that Andrew, 61, will give up his honorary leadership of various charities, known as royal patronages.

He will also no longer use the title “his royal highness″ in official settings, British media said.

The decision is an effort to insulate the monarchy from the fallout from potentially years of sordid headlines as Andrew vows to fight a lawsuit filed by an American woman, Virginia Giuffre, who alleges she was forced to have sex with the prince when she was 17. A New York judge on Wednesday rejected Andrew’s effort to have the suit dismissed, increasing the chances that he will have to testify in the case if it goes to trial.

“With The Queen’s approval and agreement, The Duke of York’s military affiliations and Royal patronages have been returned to The Queen,” the palace said, using the prince’s formal title. “The Duke of York will continue not to undertake any public duties and is defending this case as a private citizen.”

The move came after more than 150 veterans and serving members of the armed forces asked the queen to strip her second son of his military titles, saying he had failed to live up to the “very highest standards of probity, honesty and honourable conduct” that are expected of British officers.

“We understand that he is your son, but we write to you in your capacity as head of state and as Commander-in-Chief of the Army, Navy and Air Force,” they wrote in a letter released by Republic, a pressure group that campaigns for an end to the monarchy.

“These steps could have been taken at any time in the past eleven years. Please do not leave it any longer.”

Andrew served in the Royal Navy for two decades, including as a helicopter pilot during the 1982 Falklands War. The honorary military roles he lost included several overseas ones, such as his title as colonel-in-chief of the Royal New Zealand Army Logistic Regiment.

Andrew denies Giuffre’s allegations and has said he can’t recall ever meeting her.

He has spent years combatting concerns about his links with Epstein, the U.S. financier who died in 2019 while awaiting trial on child sex trafficking charges, and Epstein’s longtime companion Ghislaine Maxwell, who was convicted of related charges last month.

The prince stepped away from royal duties in November 2019 after a disastrous BBC interview in which he tried to justify his association with the pair and failed to show empathy for Epstein’s victims. But he managed to cling to his military titles and patronages until Wednesday’s ruling made Andrew’s position untenable.

Giuffre sued Andrew in August, alleging that Epstein and Maxwell coerced her into sexual encounters with the prince in 2001. Giuffre said she was sexually abused by Andrew at Maxwell’s London home, at Epstein’s New York mansion and his estate in the U.S. Virgin Islands.

On Wednesday, U.S. District Judge Lewis A. Kaplan rejected Andrew’s request to dismiss the lawsuit before trial. Lawyers for the prince had argued the terms of a 2009 settlement between Giuffre and Epstein barred her from suing anyone else associated with the case. Kaplan stressed that he wasn’t ruling on the truth of the allegations against Andrew.

Britain’s Press Association quoted a person close to Andrew as saying his team was “unsurprised by the ruling.”

“However, it was not a judgement on the merits of Ms. Giuffre’s allegations,” the person said. “This is a marathon not a sprint and the duke will continue to defend himself against these claims.”

But that is likely to have repercussions for other members of the royal family and the institution of the monarchy at a time when Elizabeth is preparing for a nationwide celebration to mark 70 years on the throne.

If the case goes to trial, Andrew will likely be required to give a sworn statement, and may have to testify in court about his relationships with Epstein, Maxwell and Giuffre. That could expose him to embarrassing questions that would undermine the authority of the royal family, said Mark Stephens, an expert on international law at Howard Kennedy in London.

“Up until now, it’s been Prince Andrew alone that has carried the water on this,” Stephens said.

“But now the issue is that he can make it much worse for the royal family when he has to get into the detail of what he was alleged to have done with a 17-year-old girl, which the public, whether it was lawful or not, are going to think was morally reprehensible.”

The decision Thursday increases the chances Andrew will do whatever he can to settle, Stephens said.

”If he’s not successful in his appeal, he’s going to have to settle because of realpolitik,” Stephens said.