Hostage reveals how he escaped from Texas synagogue 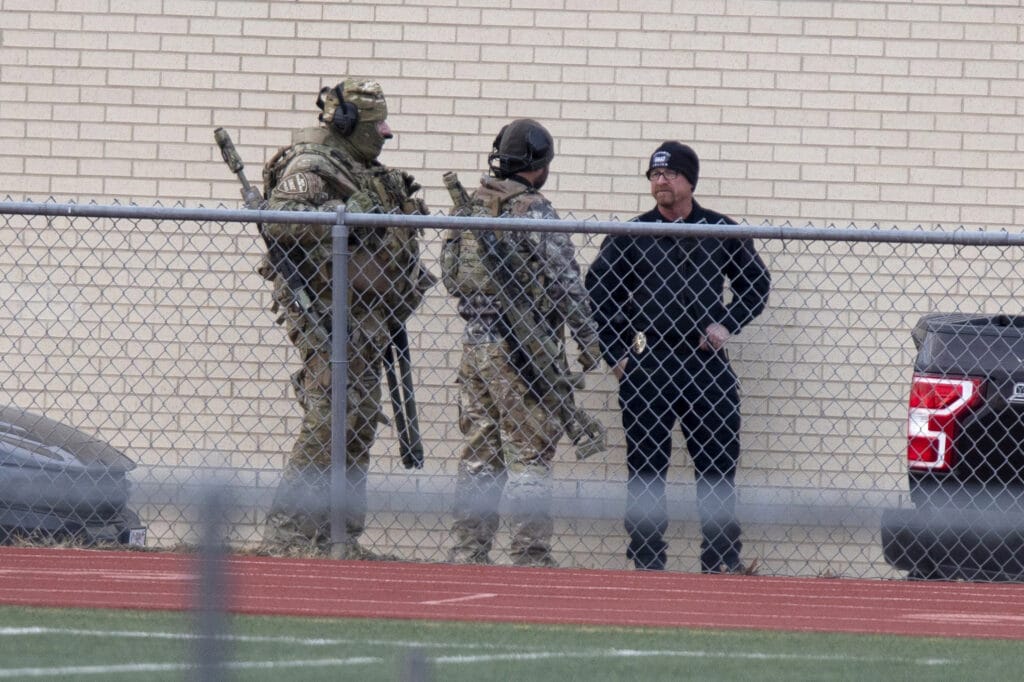 Rabbi Charlie Cytron-Walker, who escaped from a gunman holding him and others hostage in his synagogue, revealed on “CBS Mornings” how he threw a chair at the gunman when the man demanded they get on their knees. He and the two other hostages then ran out. The Associated Press has the story:

COLLEYVILLE, Texas (AP) — The rabbi of a Texas synagogue said Monday that he threw a chair at the gunman and then escaped with two other hostages after a 10-hour standoff, crediting past security training for getting himself and his congregation out safely.

Rabbi Charlie Cytron-Walker told “CBS Mornings” that he let the gunman in Saturday because he appeared to need shelter. He said the man was not threatening or suspicious at first. Later, he heard a gun click as he was praying.

“First of all, we escaped. We weren’t released or freed,” Cohen said.

Cohen said the men worked to keep the gunman engaged. They talked to the gunman, he lectured them. At one point as the situation devolved, Cohen said the gunman told them to get on their knees. Cohen recalled rearing up in his chair and slowly moving his head and mouthing “no.” As the gunman moved to sit back down, Cohen said Cytron-Walker yelled to run.

“The exit wasn’t too far away,” Cytron-Walker said. “I told them to go. I threw a chair at the gunman, and I headed for the door. And all three of us were able to get out without even a shot being fired.”

Authorities identified the hostage-taker as 44-year-old British national Malik Faisal Akram, who was killed Saturday night after the last hostages ran out of Congregation Beth Israel around 9 p.m.

The FBI on Sunday night issued a statement calling the ordeal “a terrorism-related matter, in which the Jewish community was targeted” and said the Joint Terrorism Task Force is investigating. The agency noted that Akram spoke repeatedly during negotiations about a prisoner who is serving an 86-year sentence in the U.S.

Akram could be heard ranting on a Facebook livestream of the services and demanding the release of Aafia Siddiqui, a Pakistani neuroscientist suspected of having ties to al-Qaida who was convicted of trying to kill U.S. Army officers in Afghanistan.

The investigation stretched to England, where late Sunday police in Manchester announced that two teenagers were in custody in connection with the standoff. Greater Manchester Police tweeted that counter-terrorism officers had made the arrests but did not say whether the pair faced any charges.

Video of the standoff’s end from Dallas TV station WFAA showed people running out a door of the synagogue, and then a man holding a gun opening the same door just seconds later before he turned around and closed it. Moments later, several shots and then an explosion could be heard.

Authorities have declined to say who shot Akram, saying it was still under investigation.

President Joe Biden called the episode an act of terror. Speaking to reporters in Philadelphia on Sunday, Biden said Akram allegedly purchased a weapon on the streets.

Federal investigators believe Akram purchased the handgun used in the hostage taking in a private sale, according to a person familiar with the matter who spoke on condition of anonymity because the investigation is ongoing. Akram arrived in the U.S. at John F. Kennedy International Airport in New York about two weeks ago, a law enforcement official said.

Akram arrived in the U.S. recently on a tourist visa from Great Britain, according to a U.S. official who spoke on condition of anonymity because the information was not intended to be public. London’s Metropolitan Police said in a statement that its counter-terrorism police were liaising with U.S. authorities about the incident.

U.K. Home Secretary Priti Patel told the House of Commons on Monday that she had spoken to her U.S. counterpart, Alejandro Mayorkas, and offered “the full support” of the police and security services in Britain in the investigation.

It wasn’t clear why Akram chose the synagogue, though the prison where Siddiqui is serving her sentence is in nearby Fort Worth.

Michael Finfer, the president of the congregation, said in a statement “there was a one in a million chance that the gunman picked our congregation.”

Akram used his phone during the course of negotiations to communicate with people other than law enforcement, according to a law enforcement official who was not authorized to discuss an ongoing investigation by name and spoke on condition of anonymity.

Multiple people heard the hostage-taker refer to Siddiqui as his “sister” on the livestream. But John Floyd, board chair for the Houston chapter of the Council on American-Islamic Relations — the nation’s largest Muslim advocacy group — said Siddiqui’s brother, Mohammad Siddiqui, was not involved.

Texas resident Victoria Francis, who said she watched about an hour of the livestream, said she heard the man rant against America and claim he had a bomb. Biden said there were apparently no explosives, despite the threats.

“He was just all over the map. He was pretty irritated and the more irritated he got, he’d make more threats, like ‘I’m the guy with the bomb. If you make a mistake, this is all on you.’ And he’d laugh at that,” Francis said. “He was clearly in extreme distress.”

Colleyville, a community of about 26,000 people, is about 15 miles (23 kilometers) northeast of Fort Worth. Reached outside his home Sunday, Cytron-Walker declined to speak at length about the episode. “It’s a little overwhelming as you can imagine. It was not fun yesterday,” he told the AP.

Andrew Marc Paley, a Dallas rabbi who was called to the scene to help families and hostages upon their release, said Cytron-Walker acted as a calm and comforting presence. The first hostage was released shortly after 5 p.m. That was around the time food was delivered to those inside the synagogue, but Paley said he did not know if it was part of the negotiations.

Cytron-Walker said his congregation had received training from local authorities and the Secure Community Network, which was founded in 2004 by a coalition of Jewish organizations and describes itself as “the official safety and security organization” of the Jewish community in North America. Michael Masters, the CEO of the organization, said the congregation had provided security training in August and had not been previously aware of Akram.

The standoff led authorities to tighten security in other places, including New York City, where police said that they increased their presence “at key Jewish institutions” out of an abundance of caution.