What do voters think of Biden’s performance? 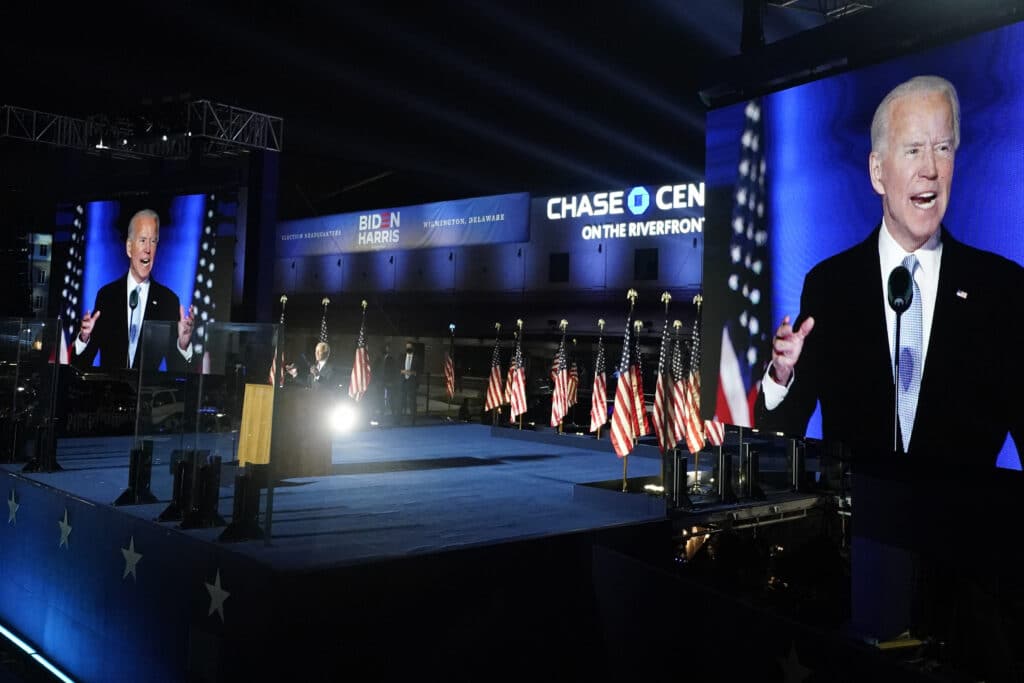 If you could sum up how voters feel about President Joe Biden’s performance one year into his term, it would be “divided.” The Associated Press interviewed several voters, including some who voted for Donald Trump in 2016 then switched their vote to Biden in 2020. Here’s the story:

(AP) President Joe Biden took office at a particularly polarized time in American history, so it’s not surprising that citizens are divided on his performance at the one-year mark.

A Georgia history teacher who voted for Biden would give him a “C” grade, faulting the president for not pushing earlier to end the filibuster in the Senate but supportive of his Build Back Better plan.

A retired nurse in Iowa who supported Pete Buttigieg in the Democratic primary says she’s been impressed by the way Biden has upheld the dignity of the office.

A registered independent in Arizona who voted for former President Donald Trump says Biden’s first year has been “pretty bad,” citing the shutdown of the Keystone XL oil pipeline and the chaotic Afghanistan withdrawal.

Here’s what else Americans have to say about the job Biden has done so far:

Craig Prichard believes Donald Trump should be in jail. But he’s far from your typical anti-Trumper: He voted for him in 2016.

Prichard is still angry at Trump over the Jan. 6 Capitol insurrection, saying he believes the former president caused it. But it was Trump’s handling of the coronavirus pandemic that led Prichard to vote for Biden in 2020.

“Trump wanted to make it look like COVID was going away,” Prichard says. “That wasn’t the way to take care of it.”

Prichard, who for 40 years built farm machinery, worked construction and eventually retired after a stint at a meatpacking plant last year, says Biden is “handling COVID as well as he can” while juggling a number of other issues.

“Biden, you can tell he’s trying to handle the pandemic, food prices, gas prices, Russia, all at the same time, and he doesn’t seem to care how he looks,” Prichard says. “Because it’s not real good right now for him, even though there’s less people dying than if Trump were there.”

“Trump, turns out, only cared about how he looked,” Prichard says.

THE TEACHER WHO GIVES BIDEN A ‘C’ GRADE

Kai Uchimura, a high school history teacher who lives in Decatur, Georgia, voted for Biden in 2020. He’d give him a “C” grade so far.

Uchimura, 26, describes himself as leaning left on most issues, though he is not a registered Democrat. He says he supports Biden’s social policy bill that remains stalled in Congress, but thinks Democrats have done a poor job of explaining its benefits.

“That Build Back Better plan, it seemed like no one knew what was in the bill except for the cost,” he says.

“I know that when he was coming into office, he had this message of trying to unite the country and extend a hand across the aisle,” Uchimura says. “But I wish he would have recognized earlier that this era of bipartisanship seems to be pretty much on thin ice.”

THE BIDEN VOTER WHO DECRIES POLARIZATION

Lynn Manning-John, a school principal on a Native American reservation on the Nevada-Idaho border, is pleased with Biden’s first year in office but worries his presidency has further polarized her community.

At a Walmart in Elko County, Nevada, a ranching region that heavily supported the former president, she’s overheard customers complain about how Biden’s agenda has permeated “Trump country.”

“There is just a reluctance to support the current president,” the 45-year-old independent voter says. “There’s pushback towards anything that he puts forward, even if it’s good and common sense.” She was especially happy with Biden’s nomination of Deb Haaland, a fellow Native American, as interior secretary.

The superintendent and five out of seven school board members in Elko County resigned last year during protests from parents’ groups opposed to lesson plans about equity and diversity in the parts of the county outside the Duck Valley Indian Reservation.

Manning-John sees the resignations and the parents’ demands as an outgrowth of the backlash to Biden’s 2020 victory.

Biden’s election win is still unreal to many Americans, she says.

“And the absolute revolt that has come about since absolutely goes directly to the school boards,” she says.

THE BIDEN VOTER WARY OF LIBERALS

Patrick Sweeney voted for Biden but has been disappointed the president hasn’t pushed back more against the left wing of the Democratic Party.

“I wish he would claim and stake out the middle ground, and be more that, ‘This is what the Democratic Party represents,’” says Sweeney, a 62-year-old retired educator in a Phoenix suburb who is not affiliated with a political party.

“So much of the conversation seems to get focused on the extreme left wing of the Democratic Party and progressive positions,” Sweeney says. “I think he needs to be more front and center in countering that.”

Sweeney is pleased with the infrastructure bill Biden signed into law but wishes he’d stopped there instead of pushing a massive increase in social service spending.

“I was enthusiastic about the original infrastructure plan,” Sweeney says. “I think it’s long overdue, and I was really glad to see it, and I think that could’ve and should’ve been a great accomplishment. Get the bulldozers and shovels rolling and get to work. She adds: “The Build Back Better plan, I think there’s too much in there that I don’t see the need for it, or I don’t know that the federal government is the solution for it.”

THE TRUMP VOTER WHO’S NOT IMPRESSED

“He’s pretty much doing exactly what I expected him to do,” says Ollarsaba, a registered independent who lives in Phoenix and works at an online car retailer. “He’s a career politician.”

He is disappointed Biden shut the Keystone XL oil pipeline, and he was appalled by the chaotic U.S. military exit from Afghanistan.

“We’re probably going to be reliant on other countries for energy, which I could potentially see leading to another conflict, or us involving ourselves in another war,” Ollarsaba says. “I think we still needed a U.S. presence in Afghanistan. Not major military operations, but we still need a presence and I think that would make that region — at least for the United States — a little less dangerous.”

The U.S. should not have had to rely on the Taliban’s cooperation to evacuate Americans from Afghanistan, he says. He worries ceding influence there will allow terrorist groups to gain a foothold.

THE DEMOCRAT WHO PREFERRED MAYOR PETE

“I thought Biden was sort of ‘Jokin’ Joe,’” Paul says. “He said things that were so off-the-cuff when (Barack) Obama was president. I thought, ‘Can we really take this guy seriously?’”

Turns out, a bit to her surprise, she can.

“I’ve been really impressed with the way he upholds the dignity of the office, the way he expresses himself,” says Paul, a self-described liberal Democrat from Des Moines, Iowa. “I knew he had experience and had been through tragedy. But I didn’t know he could project the weight of that.”

She credits Biden with following the science in his handling of the pandemic but faults him for his naïve optimism in setting last July 4 as the date by which 70% of the nation’s eligible population would be vaccinated. That goal was reached months later but the percentage has slipped under 70% because younger children were made eligible.

She was also upset by the chaotic pullout from Afghanistan, saying the administration should have foreseen the end result: “Bombs going off, people running down runways after planes.”

“They made the move, and it was not well done,” she says. “If you’re there for 20 years, what’s another six months to pull the Band-Aid off a little more slowly?”

THE BIDEN VOTER WHO WANTS HIM TO TOOT HIS OWN HORN

Natalie Rawlings, a registered Democrat who voted for Biden, says the president doesn’t get enough credit for all the things that are going right, like the strong job market that has made it easier for workers to switch jobs.

But she thinks that’s partly his own fault.

“I don’t know why he’s having such a hard time with the messaging,” says Rawlings, a 50-year-old Atlanta resident who works for a Fortune 500 company. “Did Biden think his plans were going to sell themselves?”

She also thinks Biden has misjudged his ability to cajole his former colleagues in the Senate to back his agenda.

“Biden has bit off more than he can chew,” she says. “Maybe if he did things more incrementally, but now that would appear like he’s backpedaling.”

“I can’t see a clear path for Biden into a second term,” she says.

THE TRUMP VOTER PLEASANTLY SURPRISED BY SOME BIDEN INITIATIVES

J.J. Goicoechea, a cattle rancher from Eureka, Nevada, voted for Trump and plans to vote Republican again, but he says he’s been pleasantly surprised with the Biden administration’s agricultural initiatives, including those tailored to small family farms and ranches like his.

Farms and ranches have received more than $1 billion in relief dollars since Biden took office. The administration has worked to fund independent processors after beef plants closed during the pandemic and engaged farmers in regards to climate change, working to incentivize them to offset carbon emissions through tactics like planting carbon-capturing crops.

But Goicoechea, 47, worries the attempt to strengthen regulations and the Packers and Stockyards Act could have unintended consequences and raise costs in an industry where many ranchers already operate on small margins. He attributes inflation to the government spending and relief programs that the administration has helped push through Congress and says it has raised costs on everything needed to operate a cattle ranch.

“The cost of doing business has just almost doubled over where it was last year,” Goicoechea says, citing the prices of hay, fuel, fertilizer and tires for pickups and tractors. “I’m a little concerned about where that’s going. We keep asking for help, they give us a little monetary help, and that kind of drives inflation up higher.”

THE SOCIAL WORKER WHO IS RETHINKING HER VOTE

Gina Massiah reluctantly voted for Biden, considering him the better of two bad options. But now the 49-year-old social worker isn’t so sure.

“Yes, there was a lot of division,” the Brooklyn resident says of the Trump era. But with Trump, “you knew what you were getting.”

“Was he a bigot? He was all of that. None of us are perfect. We all come with things, right? But I think he would have gotten a lot more done had he gotten reelected.” She adds: “I absolutely favor him over Biden. And woo, that’s a Black person saying that, right?”

“That might sound insane to some people that I’m saying that,” she says, “but that’s how I feel.”

Massiah, a registered Democrat who doesn’t feel bound to either party, lumps Biden in with other politicians who make big promises but “forget about you” once they get into office.

She’s particularly dismayed by the lack of progress on racial issues. While she said many had held out hope because Vice President Kamala Harris is a woman of color, “we’re still getting gunned down by police. We’re still getting targeted when we go into the stores.”