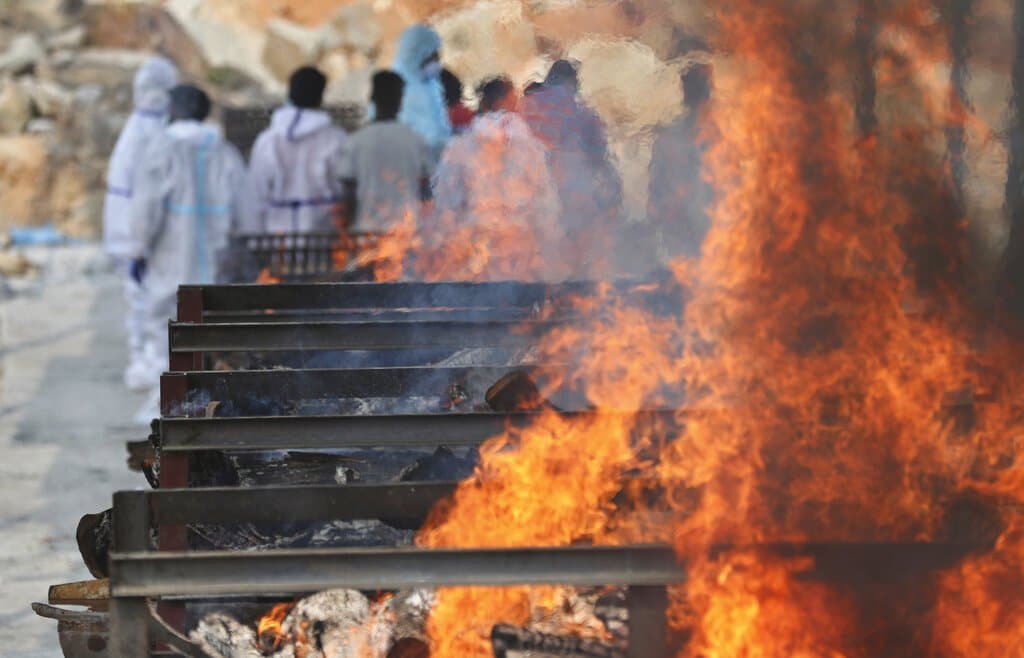 Due to the humanitarian crisis occurring in India as a result of its second surge of COVID-19, donors from all over the world are generously giving. Indiaspora is leading one of the efforts, taking in nearly $1.2 million through its website for several relief organizations. The Associated Press has the story:

The catastrophic wave of Covid-19 in India has prompted donors to send millions of dollars to the country, which Tuesday crossed the grim mark of more than 20 million cases of the killer disease.

“The situation is desperate,” says Ashish Shah, senior director for philanthropy and community engagement at Indiaspora, a global network of people of Indian origin who work for social change. “We need to get the funds and deploy them because after a month, it’ll be too late.”

During the last week of April, Indiaspora reactivated its ChaloGive website. “Chalo” means “let’s go” in Hindi. In April of 2020, donors gave nearly $1.2 million through the site to several organizations vetted by Indiaspora. The group had planned to have a giving month later this year, but decided to do it sooner because of the deteriorating situation in India.

Over the past two months, Indiaspora members heard directly from family and friends in India about the unfolding humanitarian crisis. The organization started receiving unsolicited donations as the situation became more dire. To respond quickly, Indiaspora relaunched the site early. Within two days, more than $1 million in donations rolled in.

The site allows donors to give to a slate of nonprofits working to construct makeshift hospitals and health centers, provide food and direct services, or give cash grants to individuals. Shah says the vast majority of donors have chosen an option provided by Indiaspora to spread their gift out among all three areas.

Large institutional grant makers, family foundations, and rich donors have expressed an interest in providing emergency relief to India over the past week, says Regine Webster, vice president at the Center for Disaster Philanthropy. Webster expects initial findings on the volume of COVID-related giving to organizations working in India to be available this week.

Vinod Khosla, co-founder of Sun Microsystems, added a $10 million match to his previous commitment to GiveIndia to procure much-needed oxygen equipment and encourage others to give. The Rockefeller Foundation last week approved $3.5 million in grants to help expand coronavirus testing and tracing and support emergency medical relief. That figure is on top of the $10 million Rockefeller previously committed in pandemic response in India.

The Silicon Valley Community Foundation has seen a growing interest among its donors to support pandemic relief in India. Last fall, the Indian government placed restrictions on international giving to organizations in the country. Since then, the community foundation has directed interested donors to organizations that have successfully navigated the rules and delivered assistance where it is needed, according to Chau Vuong, a spokeswoman for the grant maker. She cited CARE and the American India Foundation as examples. In late April, a donor, whom Vuong declined to identify, gave $3 million to the American India Foundation.

Smaller donors have also been active. Texas philanthropists Raj and Aradhana Asava on April 29 offered to match up to $25,000 in donations to support pandemic relief in their native India. So far, the couple, who have long given to programs in India but more recently emphasized the need to support U.S. food banks, have raised about $10,000.

”(We’re) very confident we will blow past the goal,” Raj Asava wrote in an email.

The India Development and Relief Fund, a nonprofit founded by Vinod Prakash, a retired World Bank economist, has raised more than $350,000 for Covid-relief efforts in India since April 26 — about three times the amount it raised for pandemic response in India last year.

‘Covid is inflicting more suffering than one can fathom’

Webster, at the Center for Disaster Philanthropy, fears that the flow of money will begin to ebb. People are motivated to give when they see human suffering, and in India right now, Covid is inflicting more suffering than one can fathom, she says. But the duration of the pandemic has made it more difficult for fundraisers to sound the alarm to a public that may be becoming inured to the hardships the coronavirus crisis has created.

Steve Stirling, executive director of MAP International, a global health nonprofit, shares Webster’s concerns. The hurricane season, usually a busy time for the relief work MAP International supports, is drawing near, and Stirling worries about overwhelming his donor base with calls for support.

Donors are responding, however. The nonprofit has received around $50,000 in cash gifts in the past few weeks; most of its support comes in the form of medical equipment and supplies. Stirling is hopeful that more money will arrive from donors who give around $25 dollars at a time. What is more concerning is how long it may take for MAP International to get supplies of personal protective equipment into the hands of medical workers in India. The nonprofit has a 40-foot-long cargo container full of surgical gowns, booties, face masks, and other gear that Stirling says is waiting on a green light from Indian customs and health officials.

Stirling says he won’t send the cargo until he receives proper clearance, or the plane transporting it will sit on an airport tarmac while the Indian government charges the nonprofit storage fees.

“There’s a lot of government red tape,” he says. “Once we get clearance, we’ll load up the plane.”

Early this year, the American India Foundation was turning its attention to what happens after a deadly pandemic. One new program provided online learning courses to students who had been shut out of their schools during lockdown. Another was going to link migrant workers to digital-payment programs so they could begin to rebuild their lives.

“We were kind of transitioning into more of a rehabilitation phase, without realizing that there was going to be a ferocious second wave in India,” says Nishant Pandey, the foundation’s chief executive.

Those efforts have been postponed, and the foundation has switched back to providing direct relief, primarily through the supply of oxygen equipment. The foundation has placed orders for 7,500 oxygen concentrators and is working on supplying hospitals with oxygen generators as well as liquid oxygen. The nonprofit also plans to support the mobilization of “portable hospitals” to create 2,500 additional beds at medical centers throughout the country.

Those efforts were made possible by the speed at which the foundation’s donors — about 70 percent of whom are of Indian descent — responded to the nonprofit’s pitch: “Every day counts. Now more than ever.”

During the first 10 days of the fundraising effort, Pandey says the foundation has received commitments totaling $20 million.

“We are very encouraged by the response from our donors,” Pandey says. “But the need is much greater. We obviously need more funds.”

By ALEX DANIELS of The Chronicle of Philanthropy