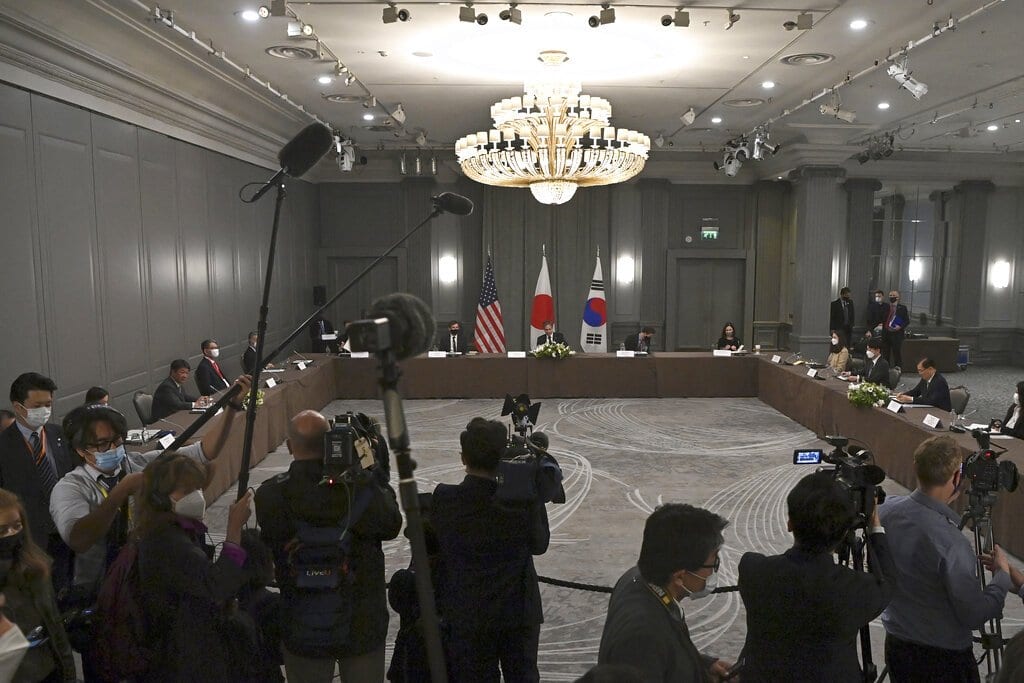 At a meeting of the Group of Seven leading countries, G-7 reps denounced China for human rights abuses against the Uyghur Muslims and unfair trade practices. However, the seven chose to deal with the problem through their own individual awareness campaigns, rather than collective action against China.

G-7 diplomats meet to deal with China, denouncing the nation

The top G-7 diplomats meeting in London said they were “deeply concerned” by China’s treatment of the Uyghur Muslim population and other minorities, which includes mass internment in “re-education” camps, forced labor and forced sterilization.

But the U.K., the United States, Canada, France, Germany, Italy and Japan committed only to tackling forced labor “through our own available domestic means,” which could range from public awareness campaigns to laws for businesses, rather than through collective action.

While the Biden administration in the U.S. is keen for a strong stand against China’s rising economic and political assertiveness, some European G-7 members are more cautious, and the G-7 joint statement stressed the need for a working relationship with Beijing.

The G-7 ministers criticized China for “arbitrary, coercive economic policies and practices” and urged it to stick to international trade rules and “respect human rights and fundamental freedoms.”

At their first face-to-face meeting for two years, the top diplomats sought unity to deal with increasing challenges from China and Russia, smoldering conflicts in Syria, Afghanistan and Ethiopia and the heavy toll the pandemic is taking on the world’s poorest countries.

The G-7 ministers called for “co-ordinated action and global solidarity” to help the world recover from the pandemic, and backed “affordable and equitable global access” to coronavirus vaccines and treatments. But wealthy countries have been reluctant so far to give up precious vaccine stocks until they have inoculated their own populations.

The group also condemned Russia’s military build-up on Ukraine’s eastern border and in Crimea and its “malign activities aimed at undermining other countries’ democratic systems.”

U.S. Secretary of State Antony Blinken was flying to Kviv after the G-7 meeting to demonstrate strong U.S. backing for the country’s response to Russian aggression.

The U.K. pushed to hold the meeting in person to give the rich countries’ club a jolt of energy after a period marked by the health crisis of the pandemic and rising nationalism around the world. Prime Minister Boris Johnson’s government is also seeking to project a dynamic “Global Britain” image in the wake of the country’s departure from the European Union.

Delegates at Lancaster House, a grand London mansion, observed social distancing, sat behind transparent screens in meetings and were tested daily for the virus. Even so, India’s foreign minister was forced to go into self-isolation after members of his country’s delegation tested positive for COVID-19.

Indian External Affairs Minister Subrahmanyam Jaishankar tweeted that he was attending “in the virtual mode” as a ”measure of abundant caution” after being told he might have been exposed to the virus.

Organizers insisted there was little risk to the rest of the delegates.

India is not a G-7 member but was invited along with fellow democracies South Korea, Australia and South Africa as a guest.

India is experiencing a vast outbreak of COVID-19, with 382,315 new confirmed cases and 3,780 reported deaths in the last 24 hours, in what is widely believed to be an undercount.

The guest nations’ delegations didn’t attend the conference on Tuesday, though Jaishankar has held meetings in London with officials including British Home Secretary Priti Patel and the American secretary of state.

U.S. State Department spokesman Ned Price said that “we have no reason to believe any of our delegation is at risk.”

The U.K. is due to host the group’s leaders at a summit in Cornwall, southwest England, in June.

Johnson, who attended the gathering briefly on Wednesday defended the decision to hold the foreign ministers’ meeting in person despite the virus.

“I think it’s very important to try to continue as much business as you can as a government,” the prime minister said.