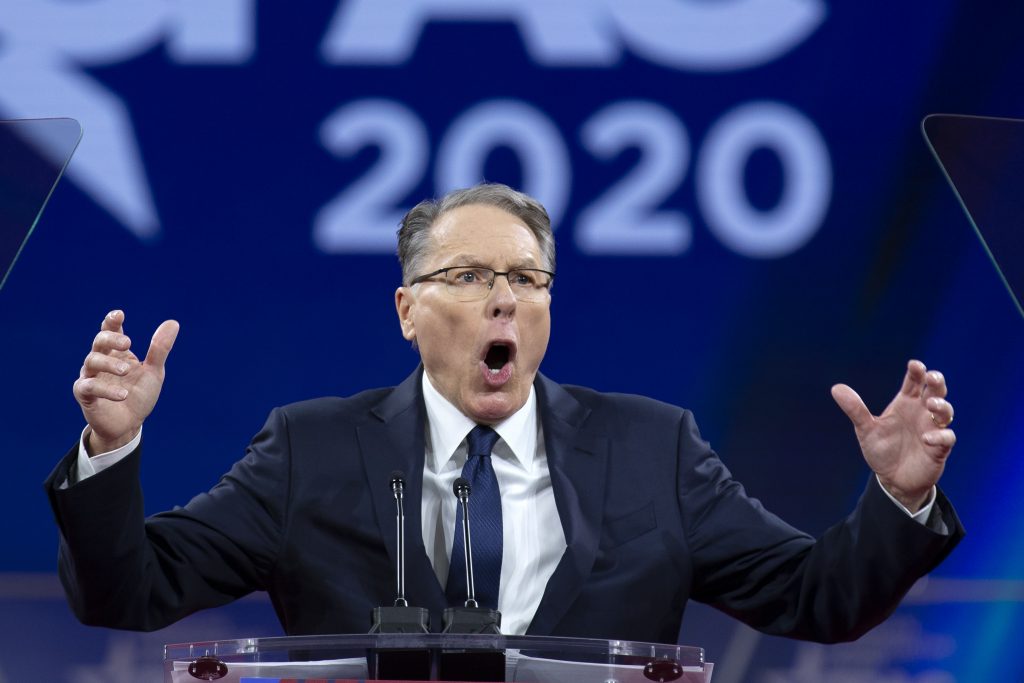 Judge Harlin Hale dismissed the NRA’s attempt to file for bankruptcy, saying it was filed in bad faith. New York Attorney General Letitia James, who started an investigation into the gun organization, has said she intends to see the gun rights organization dissolved. The Associated Press has the story:

NRA’s attempt to file bankruptcy fails, leaving it to face New York’s lawsuit to dissolve it

DALLAS (AP) — A federal judge dismissed the National Rifle Association’s bankruptcy case Tuesday, leaving the powerful gun-rights group to face a New York state lawsuit that accuses it of financial abuses and aims to put it out of business.

The judge was tasked with deciding whether the NRA should be allowed to incorporate in Texas instead of New York, where the state is suing in an effort to disband the group. Though headquartered in Virginia, the NRA was chartered as a nonprofit in New York in 1871 and is incorporated in the state.

Judge Harlin Hale said in a written order that he was dismissing the case because he found the bankruptcy was not filed in good faith.

“The Court believes the NRA’s purpose in filing bankruptcy is less like a traditional bankruptcy case in which a debtor is faced with financial difficulties or a judgment that it cannot satisfy and more like cases in which courts have found bankruptcy was filed to gain an unfair advantage in litigation or to avoid a regulatory scheme,” Hale wrote.

His decision followed 11 days of testimony and arguments. Lawyers for New York and the NRA’s former advertising agency grilled the group’s embattled top executive, Wayne LaPierre, who acknowledged putting the NRA into Chapter 11 bankruptcy without the knowledge or assent of most of its board and other top officers.

“Excluding so many people from the process of deciding to file for bankruptcy, including the vast majority of the board of directors, the chief financial officer, and the general counsel, is nothing less than shocking,” the judge added.

Phillip Journey, an NRA board member and Kansas judge who had sought to have an examiner appointed to investigate the group’s leadership, was concise about Hale’s judgment: “1 word, disappointed,” he wrote in a text message.

LaPierre pledged in a statement to continue to fight for gun rights.

“Although we are disappointed in some aspects of the decision, there is no change in the overall direction of our Association, its programs, or its Second Amendment advocacy,” LaPierre said via the NRA’s Twitter account. “Today is ultimately about our members — those who stand courageously with the NRA in defense of constitutional freedom. We remain an independent organization that can chart its own course, even as we remain in New York to confront our adversaries.”

Lawyers for New York Attorney General Letitia James argued that the case was an attempt by NRA leadership to escape accountability for using the group’s coffers as their personal piggybank. But the NRA’s attorneys said it was a legitimate effort to avoid a political attack by James, who is a Democrat.

LaPierre testified that he kept the bankruptcy largely secret to prevent leaks from the group’s 76-member board, which is divided in its support for him.

Hale dismissed the NRA’s case without prejudice, meaning the group can refile it. However, he warned that in doing so the NRA’s leaders would risk losing control.

The judge wrote that if the case is refiled, he would immediately take up “concerns about disclosure, transparency, secrecy, conflicts of interest” between NRA officials and their bankruptcy legal team. He said that the lawyers “unusual involvement” in the NRA’s affairs raised concerns that the group “could not fulfill the fiduciary duty” and might lead him to appoint a trustee to oversee it.

Hale noted the NRA could still pursue other legal steps to incorporate in Texas, but James said such a move would require her approval — and that seems unlikely.

James is New York’s chief law enforcement officer and has regulatory power over nonprofit organizations incorporated in the state. She sued the NRA last August, saying at the time that the “breadth and the depth of the corruption and the illegality” at the NRA justified its closure. James took similar action to force the closure of former President Donald Trump’s charitable foundation after alleging he used it to advance business and political interests.

During a news conference after the ruling, James said she read transcripts of LaPierre’s testimony, which was “filled with contradictions.” She reiterated that she intends to see the NRA dissolved, which ultimately would be decided by a judge, not the attorney general. The discovery process in her lawsuit is ongoing, James said, and she expects a trial to happen sometime in 2022.

“There are individuals and officers who are using the NRA as their personal piggy bank and they need to be held accountable,” James said.

Shannon Watts, who founded Moms Demand Action for Gun Sense in America, said in a series of tweets that the bankruptcy dismissal “comes at the worst possible time for the NRA: right as background checks are being debated in the Senate.”

“It will be onerous if not impossible for the NRA to effectively oppose gun safety and lobby lawmakers while simultaneously fighting court battles and mounting debt,” said Watts, whose organization is part of the Michael Bloomberg-backed Everytown for Gun Safety.

The NRA’s financial standing has been upended by the coronavirus pandemic, but there was consensus during the bankruptcy trial that it remains financially sound

Last year, the group laid off dozens of employees, canceled its national convention and scuttled fundraising. The NRA’s bankruptcy filing listed between $100 million and $500 million in assets and the same range in liabilities. In announcing the case, it trumpeted being “in its strongest financial condition in years.”

“I think the question is, despite those self-inflicted wounds and despite the fact that they’re in some ways a shadow of their former self, can they continue to exert influence and try and keep the opponents of even the most modest reforms to increase gun safety toeing the line?” he said.