Kadafi’s Son Presents His Candidacy for President Of Libya 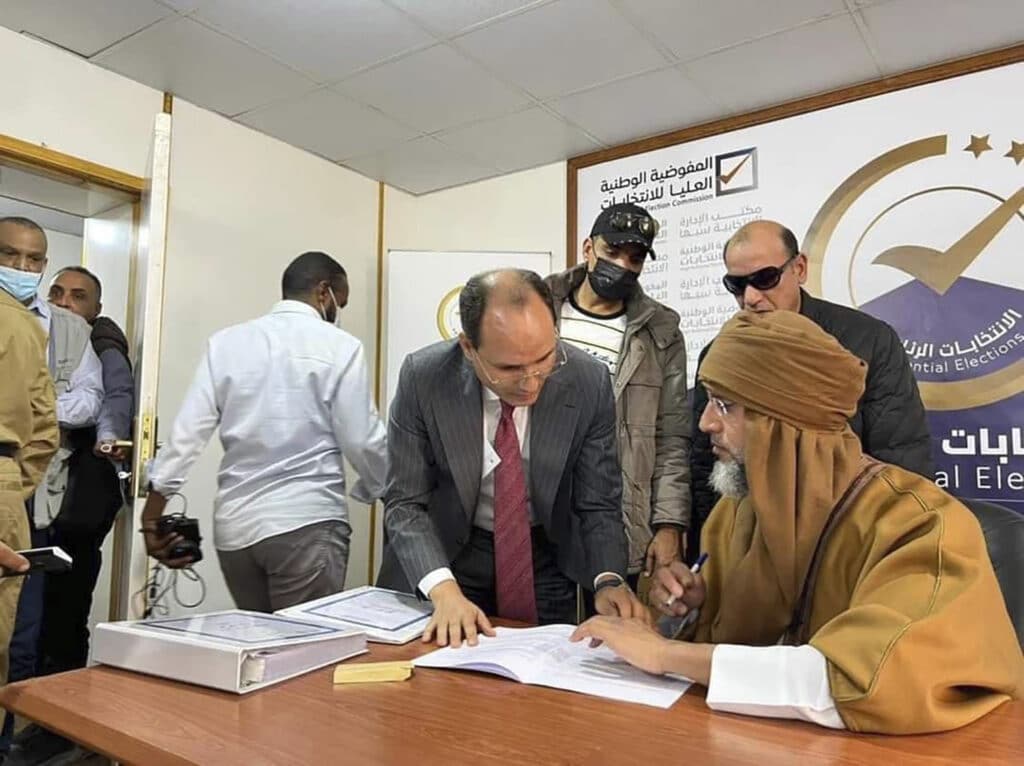 Seif al-Islam, who is wanted by the International Criminal Court on charges of crimes against humanity related to the 2011 uprising, submitted his candidacy papers in the southern town of Sabha, 650 kilometers (400 miles) south of the capital of Tripoli, the High National Elections Commission said in a statement.

Gadhafi’s son was captured by fighters in the town of Zintan late in 2011, the year when a popular uprising, backed by the NATO, toppled his father after more than 40 years in power. Moammar Kadafi was killed in October 2011 amid the ensuing fighting that would turn into a civil war.

In a video shared by an election official, Seif al-Islam addressed the camera, saying that God will decide the right path for the country’s future. The 49-year old, who earned a PhD at the London School of Economics, wore a traditional Libyan robe, turban and spectacles. It was the first time in years that he appeared in public.

The second-born son to the longtime dictator, he was seen as the reformist face of the Gadhaf regime before the 2011 uprising. He was released in June 2017 after more than five years of detention. This July, he told The New York Times in an exclusive interview that he was considering a run for the country’s top office. His candidacy is likely to stir controversy across the divided country.

Seif al-Islam is wanted by the ICC on charges of crimes against humanity allegedly committed in the first weeks of the 2011 uprising. ICC spokesman Fadi El Abdallah declined to comment on Seif al-Islam’s candidacy.

“The Court doesn’t comment on political issues, as for the legal side there is a pending warrant of arrest and that hasn’t changed,” he said.

Seif al-Islam’s campaign may focus on the failure of political parties and armed groups to establish a government capable of stabilizing and uniting the fractured country since the 2011 overthrow and killing of his father. However, he is highly likely to face stiff resistance from armed groups and militias particularly in the capital, Tripoli, and the western town of Misrata.

Abdel-Rahman el-Swahili, a lawmaker from Misrata, voiced his rejection to Seif al-Islam’s candidacy, saying that Gadhafi’s son should be prosecuted, not running for president.

“Those who believe in the possibility of Libya’s returning to the era of dictatorship after all these sacrifices, are delusional,” he wrote on Facebook.

A group of elders and militia leaders in the western town of Zawiya also announced their rejection of the candidacies of Seif al-Islam and Hifter, warning about the return of civil war. They threatened in a statement to shut polling stations if the elections proceeded with the current laws.

Libya is set to hold presidential elections on Dec. 24, after years of U.N.-led attempts to usher in a more democratic future and bring the country’s war to an end. Following the overthrow and killing of Gadhafi, oil-rich Libya spent most of the last decade split between rival governments — one based in the capital, Tripoli, and the other in the eastern part of the country.

The announcement of Seif al-Islam’s candidacy came after an international conference in Paris on Friday expressed support for holding “free, fair, inclusive and credible presidential and parliamentary elections” on Dec. 24.

The long-awaited vote still faces challenges, including unresolved issues over laws governing the elections, and occasional infighting among armed groups. Other obstacles include the deep rift that remains between the country’s east and west, split for years by the war, and the presence of thousands of foreign fighters and troops.

Gadhafi the dictator had eight children, most of whom played significant roles in his regime. His son Muatassim was killed at the same time Gadhafi was captured and slain. Two other sons, Seif al-Arab and Khamis, were killed earlier in the uprising. Another son, al-Saadi Gadhafi, was released in September after more than seven years of detention in the capital of Tripoli following his extradition from neighboring Niger.

Previous Article
Will Foreign Fighters Leave Libya Before the Elections?
Next Article
Petra Mayer, Of National Public Radio, Died At 46