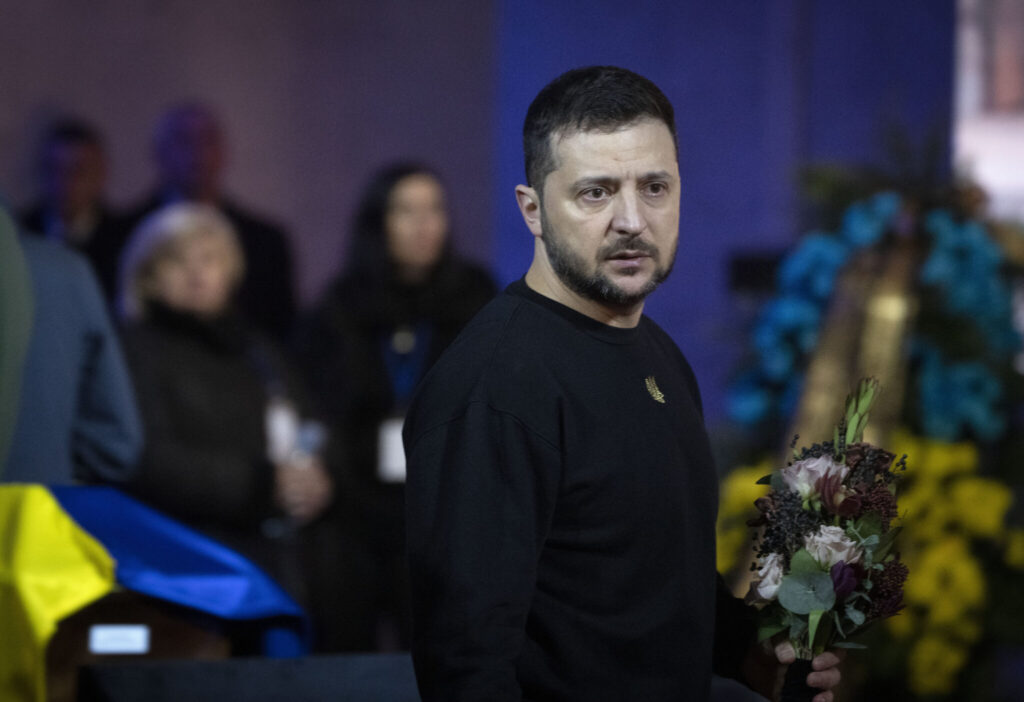 A slew of senior officials were dismissed on Tuesday in Ukraine’s biggest political shake-up of the war so far that Kyiv said showed President Volodymyr Zelenskiy was in tune with his public following corruption allegations. A long-running battle against corruption in Ukraine has taken on vital significance as Russia’s invasion has made Kyiv heavily reliant on Western support and it pursues a bid to join the European Union. The Associated Press has the story:

A high-level shakeup in the Ukrainian government cost nearly a dozen senior officials their jobs, as the country’s president sought Tuesday to root out entrenched corruption while conducting the fight against Russia’s invasion.

The crackdown came as Poland formally requested permission from Germany to transfer a modest number of its Leopard 2 battle tanks to Ukraine. Germany builds the high-tech armor and Warsaw needs Berlin’s permission to send them to a non-NATO country.

In Kyiv, the deputy head of Ukraine’s presidential office quit after President Volodymyr Zelenskyy pledged to address high-level corruption allegations — including some related to specific wartime spending — that have embarrassed authorities and could slow the country’s bids to join the European Union and NATO.

Kyrylo Tymoshenko asked to be relieved of his duties, according to an online copy of a decree signed by Zelenskyy and Tymoshenko’s own social media posts. Neither gave a reason for the resignation.

In all, four deputy ministers and five regional governors were set to leave their posts, the country’s cabinet secretary said on the Telegram messaging app.

The departures thinned the government’s wartime ranks as Zelenskyy had already lost his Interior Minister, who oversaw Ukraine’s police and emergency services, and the rest of the ministry’s leadership in a helicopter crash last week.

With Western allies channeling billions of dollars to help Kyiv’s fight against Moscow, Zelenskyy had pledged to weed out corruption which some observers have described as endemic. Zelenskyy came to power in 2019 on an anti-establishment and anti-corruption platform.

Tymoshenko joined the presidential office in 2019, after working on Zelenskyy’s media and creative content strategy during his presidential campaign.

In his nightly video address Sunday, Zelenskyy said Ukraine’s focus on the Russian invasion would not stop his government from tackling alleged corruption, even amid a war.

“I want to be clear: There will be no return to what used to be in the past,” Zelenskyy said.

Tymoshenko was last year under investigation relating to his personal use of luxury cars. He was also among officials linked last September by an investigator working with the National Anti-Corruption Bureau of Ukraine to the embezzlement of humanitarian aid worth more than $7 million earmarked for the southern Zaporizhzhia region. He has denied all the allegations.

On Sunday, a deputy minister at the infrastructure ministry, Vasyl Lozynsky, was dismissed for being part of a network allegedly embezzling budget funds.

Oleksandr Kubrakov, the infrastructure minister, said Lozynsky was relieved of his duties after Ukraine’s anti-corruption agency detained him while he was receiving a $400,000 bribe for helping to fix contracts related to restoring facilities battered by Russian missile strikes.

Last June, the EU agreed to put Ukraine on a path toward EU membership. To join the bloc, countries must meet a detailed host of economic and political conditions, including a commitment to the rule of law and other democratic principles.

Ukraine has long aspired to join NATO, too, but the military alliance is not about to offer an invitation, because of the country’s contested borders, defense establishment shortcomings and, in part, its corruption issues.

Meanwhile, the delivery of an expected 14 Leopard tanks from Poland appeared to be a foregone conclusion, with the main outstanding question being when it will happen.

German Foreign Minister Annalena Baerbock said Sunday that Berlin wouldn’t seek to stop Poland providing the versatile tanks to Kyiv if it asked, and Polish Prime Minister Mateusz Morawiecki said Tuesday the Poles — and other Western allies he didn’t identify — are already training Ukrainian soldiers in Poland on the Leopards.

German officials confirmed to the dpa news agency they had received the Polish application and said it would be assessed “with due urgency.”

Poland is a leading advocate in the EU for giving military aid to help Ukraine prevail 11 months after the Kremlin’s forces invaded. Though Germany has become one of Ukraine’s main weapons suppliers, other Western allies — especially Poland and the Baltic countries on NATO’s eastern flank that feel especially threatened by Russia — have shown impatience with Chancellor Olaf Scholz’s perceived slowness to act.

Polish Defense Minister Mariusz Błaszczak appealed to Germany “to join the coalition of countries supporting Ukraine with Leopard 2 tanks” — a reference to recent pressure on Berlin to send some of its own tanks. Germany has hesitated to take that step, despite Ukraine’s pleas.

“This is our common cause, because it is about the security of the whole of Europe!” Błaszczak tweeted.

“I hope the response from the German side comes quickly this time, because the Germans are lingering, dodging, acting in a way that is difficult to understand,” Morawiecki said.

He claimed Germany was unwilling to defend Ukraine more broadly and speculated on why that might be: “Does it mean fear, some not entirely comprehensible dread or faith that a return to normal relations with Russia is possible?”

NATO Secretary General Jens Stoltenberg called for the speedy delivery of new weapons to Ukraine, where a broad battlefield stalemate is expected to give way to new offensives in the spring.

“At this crucial moment in the war, we need to provide Ukraine with heavier and more advanced systems, and we need to do it faster,” Stoltenberg said Tuesday after talks with German Defense Minister Boris Pistorius in Berlin.

Polish officials have indicated that Finland and Denmark are ready to join Warsaw in sending Leopards to Ukraine. Poland wants to send a 14-strong company of the tanks, but these would barely make an impression in a war that involves thousands of tanks. If other countries contribute, Warsaw reckons, the tank detachment could grow in size.

Ukraine’s presidential office said Tuesday that at least five civilians were killed and seven others were wounded in Ukraine over the previous 24 hours. One Russian rocket hit a school in eastern Ukraine, killing one person, Donetsk region Gov. Pavlo Kyrylenko said.

Russian forces also shelled nine towns and villages in the northern Sumy region, which borders Russia, hitting a house where a young woman was killed and three other people were wounded, local Gov. Dmytro Zhyvytskyy reported on Telegram.