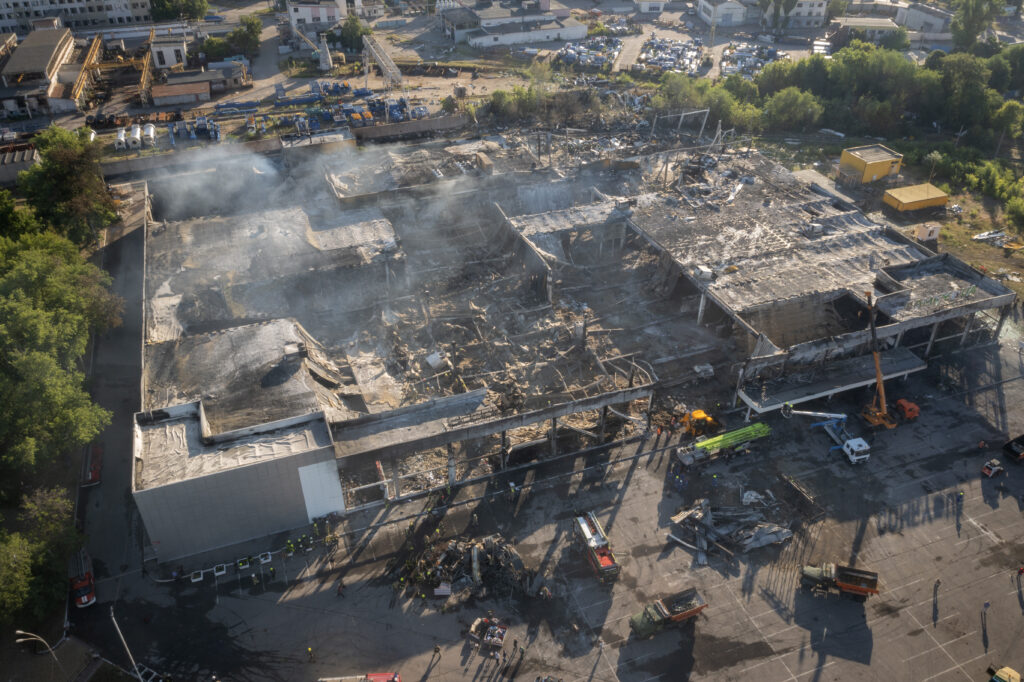 Ukrainian and Western leaders have denounced the strike as a war crime and a terrorist attack, and it drew swift condemnation from the Group of Seven leaders meeting in Europe, including Macron. When will it end? When will the West finally have to step in? When Poland gets attacked? If Finland and Sweden get drawn in? If God forbid a missile hits London? How many more war crime evidence is needed before the world steps in? How many more innocent children need to die at the indirect hands of Vladimir Putin before the world says enough? As reported by the AP:

Speaking at the end of the G-7 summit in Germany, Macron appeared to address that concern, vowing that the seven industrialized democracies would support Ukraine and maintain sanctions

KREMENCHUK, Ukraine (AP) — French President Emmanuel Macron said Tuesday that Russia “cannot and should not win” the war in Ukraine, a day after a Russian missile attack on a crowded shopping mall that killed 18 put the conflict’s terrible toll on full view.

Ukrainian and Western leaders, including Macron, have denounced the strike as a war crime and a terrorist attack, and it drew swift condemnation from the G-7 leaders meeting in Europe at the time. It came during an unusually intense barrage of Russian strikes all across Ukraine, including in the capital of Kyiv, that drew new attention to a war that some fear could fade from the headlines as it drags on.

Speaking at the end of the G-7 summit in Germany, Macron appeared to address that concern, vowing that the seven industrialized democracies would support Ukraine and maintain sanctions against Russia “as long as necessary, and with the necessary intensity.”

Macron said “Russia cannot and should not win,” he said, adding that Monday’s attack on the mall was “a new war crime.”

As Macron spoke, rescuers combed through the charred rubble of the shopping mall in Kremenchuk that authorities said was struck when more than 1,000 afternoon shoppers and workers were inside.

The attack recalled strikes earlier in the war that hit a theater, a train station, and a hospital. Ukrainian President Volodymyr Zelenskyy called it “one of the most daring terrorist attacks in European history.” The G-7 leaders said, “indiscriminate attacks on innocent civilians constitute a war crime.”

At Ukraine’s request, the U.N. Security Council scheduled an emergency meeting in New York on Tuesday to discuss the attack.

Striking a defiant note, Kremlin spokesman Dmitry Peskov said that Russia would press its offensive until it fulfills its goals, noting that the hostilities could end “before the end of the day” if Ukraine were to meet the Russian demands and orders its troops to surrender.

The Kremlin has demanded that Ukraine recognize Russia’s sovereignty over Crimea, which Moscow annexed in 2014, acknowledge the independence of Moscow-backed separatist regions in eastern Ukraine, and recognize the current situation, an apparent reference gains Russia has made since the start of the war.

As they have in other attacks, Russian authorities claimed that the mall was not the target. Defense Ministry spokesman Lt. Gen. Igor Konashenkov said that warplanes fired precision-guided missiles at a depot containing Western weapons and ammunition, causing powerful blasts that set the mall on fire.

Ukrainian officials have directly contradicted that, saying the mall itself was hit in the strike. Wayne Jordash, a British lawyer who is working with Ukrainian officials to investigate possible war crimes, meanwhile. said that initial indications were that there were no military targets nearby, but the investigation is ongoing. He did say a factory nearby was also hit.

Konashenkov also alleged that the mall was not in use, a false claim contradicted by witnesses.

Kateryna Romashyna, a local resident, told The Associated Press that she had just arrived at the mall when there was an explosion. The blast knocked her down. When another came about 10 minutes later, she realized she needed to get away.

“I ran away from the epicenter with all of my strength,” she said. “It was terrifying.”

Fighting back tears, she said that “you have to be a real monster” to strike a shopping mall.

The regional governor, Dmytro Lunin, said at least 18 people were killed in the attack and 59 others sought medical assistance, of whom 25 were hospitalized. The region declared a day of mourning Tuesday for the victims of the attack.

Ukrainian Interior Minister Denis Monastyrsky said after visiting the scene that many bodies were burned beyond recognition and their identification could take days, adding that 21 people were considered missing.

Monastyrsky noted that most of up to 1,000 people who were in the mall when an air raid siren sounded quickly moved to a shelter across the road.

“Unfortunately, those people who stayed during the air alarm died only because they remained there,” he added, urging both businesses and customers to adhere to safety protocols and quickly get to safety after an attack warning.

Ukraine’s prosecutor general, Iryna Venediktova, said the missile attack was one of Russia’s “crimes against humanity,” noting that Moscow’s military has been “systematically shelling civilian infrastructure with the aim to scare people, to kill people, to bring terror to our cities and villages.”

Venediktova emphasized the need for Ukrainians across the entire country to remain alert, adding that they should expect a similar strike “every minute.”

The unusually intense spate of fire in recent days came as the G-7 leaders gathered in Europe. They pledged continued support for Ukraine and the world’s major economies prepared new sanctions against Russia, including a price cap on oil and higher tariffs on goods.

The Russian strike echoed earlier attacks that caused large numbers of civilian casualties — such as one in March on a Mariupol theater where many civilians had holed up, killing an estimated 600, and another in April on a train station in eastern Kramatorsk that killed at least 59 people.

On Tuesday, Russian forces struck the Black Sea city of Ochakiv in the Mykolaiv region, damaging apartment buildings and killing two, including a 6-year-old child. A further six people, four of them children, were wounded. One of them, a 3-month-old baby, is in a coma, according to local officials.

Russia has increasingly used long-range bombers in the war. Ukrainian officials said Russian Tu-22M3 long-range bombers flying over Russia’s western Kursk region fired the missiles, one of which hit the shopping center and another that struck a sports arena in Kremenchuk.

Zelenskyy has called for more air defense systems from his Western allies to help his forces fight back. The U.S. appeared ready to respond to that call, and NATO’s support for Ukraine will be a major focus of its summit this week.

The attack on Kremenchuk came as Russia was pressing an all-out assault on the last Ukrainian stronghold in eastern Luhansk province — part of its campaign to wrest the eastern Donbas region from Ukraine.

By FRANCESCA EBEL and YURAS KARMANAU

Previous Article
G-7 ban on Russian gold, how would it work?
Next Article
Abortion battles in state courts after Supreme Court ruling