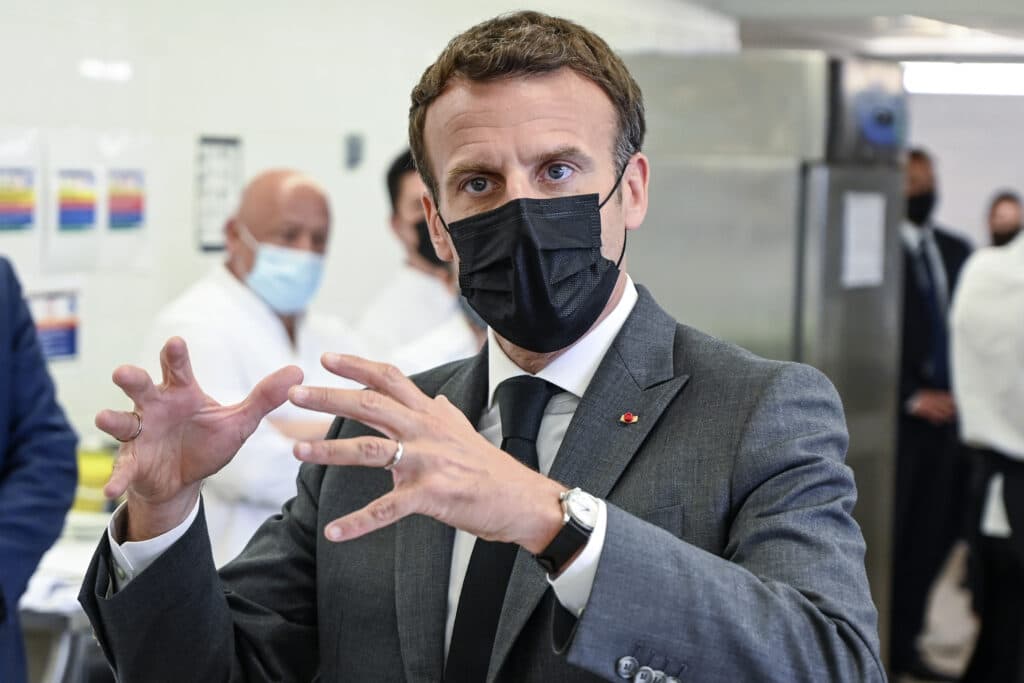 A video that has gone viral shows a man slapping French President Emmanuel Macron on the face as he visited the town of Tain-l’Hermitage. He yelled “Montjoie! Saint Denis!” a centuries-old royalist war cry, then declared, “A bas la Macronie,” or “Down with Macron.” The Associated Press has the story:

PARIS (AP) — French President Emmanuel Macron was slapped Tuesday in the face by a man during a visit to a small town in southeastern France, an incident that prompted a wide show of support for the head of state from politicians across from the ideological spectrum.

The French president was greeting the public waiting for him behind barriers in the town of Tain-l’Hermitage after he visited a high school that is training students to work in hotels and restaurants.

A video shows a man slapping Macron in the face and his bodyguards pushing the man away as the French leader is quickly rushed from the scene.

A bodyguard, who was standing right behind Macron, raised a hand in defense of the president, but was a fraction of a second too late to stop the slap. The bodyguard then put his arm around the president to protect him.

Macron just managed to turn his face away as the aggressor’s right hand connected, making it appear that the president took more of a glancing blow than a direct slap.

The man, who was wearing a mask, appears to have cried out “Montjoie! Saint Denis!” a centuries-old royalist war cry, before finishing with “A bas la Macronie,” or “Down with Macron.”

Another video showed Macron immediately coming back after the incident, seemingly to face his assailant, and then to say hello to other members of the crowd.

A few hours later, he took a 25-minute walk in the narrow streets of the nearby city of Valence, posing for selfies with a small crowd and chatting with many people in a light and warm atmosphere. Some could be heard telling Macron, “Thank you” and “Good luck.”

In 2018, “Montjoie! Saint Denis!” was cried out by someone who threw a cream pie at far-left French lawmaker Eric Coquerel. At the time, the extreme-right, monarchist group Action Francaise took responsibility. Coquerel on Tuesday expressed his solidarity with Macron.

Speaking at the National Assembly, the lower house of the French parliament, Prime Minister Jean Castex said “through the head of state, that’s democracy that has been targeted.” Lawmakers from across the political spectrum got to their feet and applauded loudly in a show of support.

“Democracy is about debate, dialogue, confrontation of ideas, expression of legitimate disagreements, of course, but in no case can it be violence, verbal assault and even less physical assault,” Castex said.

Visibly fuming, she said later that while Macron is her top political adversary, the assault was “deeply, deeply reprehensible.”

Former President Francois Hollande of the Socialist Party tweeted that the slap was an “unbearable and intolerable blow against our institutions….The entire nation must show solidarity with the head of state.”

Less than one year before France’s next presidential election, centrist Macron embarked last week on a political “tour de France,” saying he plans to visit French regions in the coming months to “feel the pulse of the country” as the government works to revive the nation’s pandemic-hit economy.

Macron has said in an interview he wants to engage with people in a mass consultation with the French public aimed at “turning the page” of the pandemic — and preparing his possible campaign for a second term.

Mounting concerns about violence against elected officials and police have been aired in France, particularly after unruly members of “yellow vest” economic protest movement repeatedly clashed with riot-control officers in 2019.

Village mayors and lawmakers also have been targeted with physical assaults, death threats and harassment.

But France’s well-protected head of state had been spared, which compounded the shockwaves that rippled through French politics in the wake of Tuesday’s assault.

Macron, like his predecessors, enjoys spending time in meet-and-greets with members of the public. Called “crowd baths” in French, they have long been a staple of French politics and only very rarely produce shows of disrespect for the president.

A bystander yanked then-President Nicolas Sarkozy’s suit during a crowd bath in 2011. His successor, Hollande, was showered with flour the next year, months before winning the presidential election.

Elaine Ganley in Paris, and John Leicester in Le Pecq, France, contributed to the story.