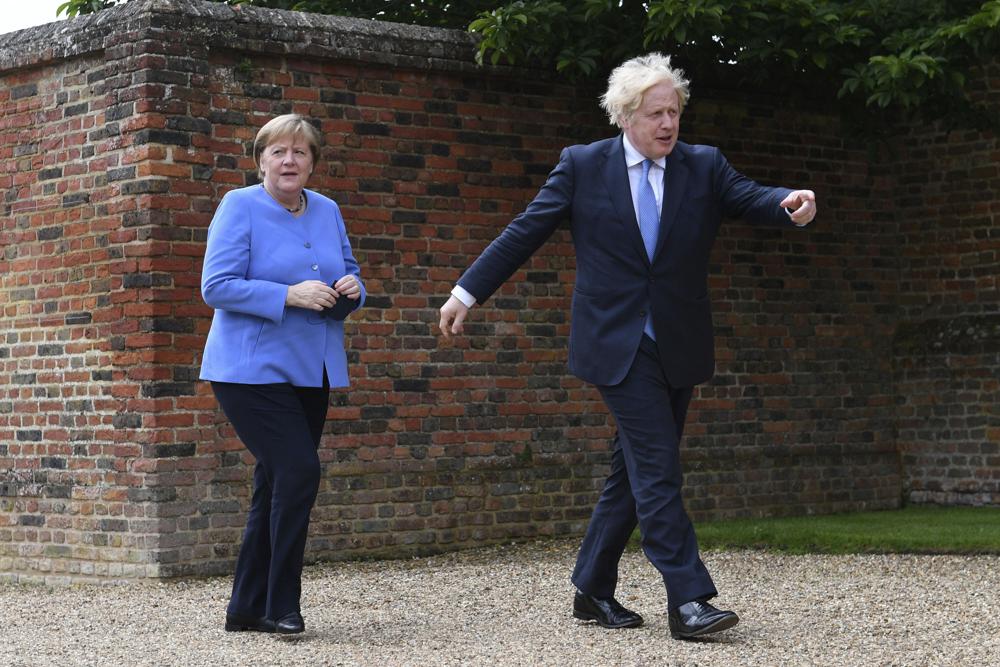 A new chapter hopeful for German relations with its neighbors is emerging. Longtime Chancellor Angela Merkle is stepping down later this year but wants relations to improve with England. The Associated Press has the story:

After tense relations between Germany and England, Merkel is stepping down

LONDON (AP) — German Chancellor Angela Merkel made her final visit to Britain on Friday before she steps down later this year, laying out her hope that relations between two of Europe’s major powers can be reset following years of Brexit-related tensions.

In her 22nd visit to the U.K. since she became chancellor 16 years ago, Merkel sought to downplay the tensions that clearly arose after British voters decided in June 2016 to leave the European Union. She even expressed interest in a new treaty between the two countries to cement the new relationship.

“It is, now that Britain has left the European Union, a good opportunity to open a new chapter in our relationship,” she told a joint press conference alongside her host, British Prime Minister Boris Johnson, after they dined on English asparagus and Oxfordshire beef during a working lunch at his Chequers country retreat.

“We would be very happy on the German side to work together on a friendship treaty or a cooperation treaty, which would reflect the whole breadth of relations,” she said before heading off to meet with Queen Elizabeth II at Windsor Castle.

Merkel also addressed Johnson’s Cabinet via video call, the first foreign leader to do so since U.S. President Bill Clinton in 1997. Both leaders agreed during their discussions that their respective cabinets would meet annually, the first arrangement of its kind for the U.K.

Merkel said she was optimistic that “pragmatic” solutions can be found to post-Brexit trading arrangements as they relate to Northern Ireland, the U.K.’s sole land border with the EU and its tariff-free single market and customs union.

One flash point since the new arrangements came into place at the start of the year has centered on chilled meats, such as sausages, which are staples of German and British cuisine. Under EU rules, sales of such products are not allowed from so-called third countries, which Britain is after Brexit. A grace period to allow British “banger” sales to Northern Ireland was extended earlier this week by a further three months to the end of September.

Johnson said he was confident the thorny issue will be resolved following his meeting with Merkel.

“Imagine if Bratwurst could not be moved from Dortmund to Duesseldorf because of the jurisdiction of an international court,” he said. “You’d think it was absolutely extraordinary. So we have to sort it out. I’m sure as Angela says with goodwill and with patience we can sort it out.”

Merkel also said double-jabbed Britons should be able to travel to Germany without quarantine in the “foreseeable future.”

But she expressed “grave concern” to Johnson over the number of fans being allowed into Wembley Stadium for the latter stages of soccer’s European Championship given high levels of infection of the more contagious delta variant of coronavirus in the U.K.

More than 60,000 spectators will be at the stadium in north London for the semifinals on July 6 and 7 and the final on July 11 as part of a government program on holding mass events safely. All ticket-holders must show evidence of a negative COVID-19 test or proof of two vaccine doses.

Merkel also said she was “a little bit sad” that the England soccer team beat Germany 2-0 in their round of 16 match earlier this week but sent her best wishes to the England team for the rest of the tournament.

“I’m obviously grateful to you for breaking with that tradition, just for once,” Johnson quipped.

Johnson also announced the creation of a new academic medal in honor of Merkel, a scientist by training. An award of 10,000 pound ($13,800) will be given each year from 2022 to a British or German woman in science. It is named after Caroline Herschel, a German-born British astrophysicist who was a pioneer in the field.

Geir Moulson in Berlin contributed to this story.