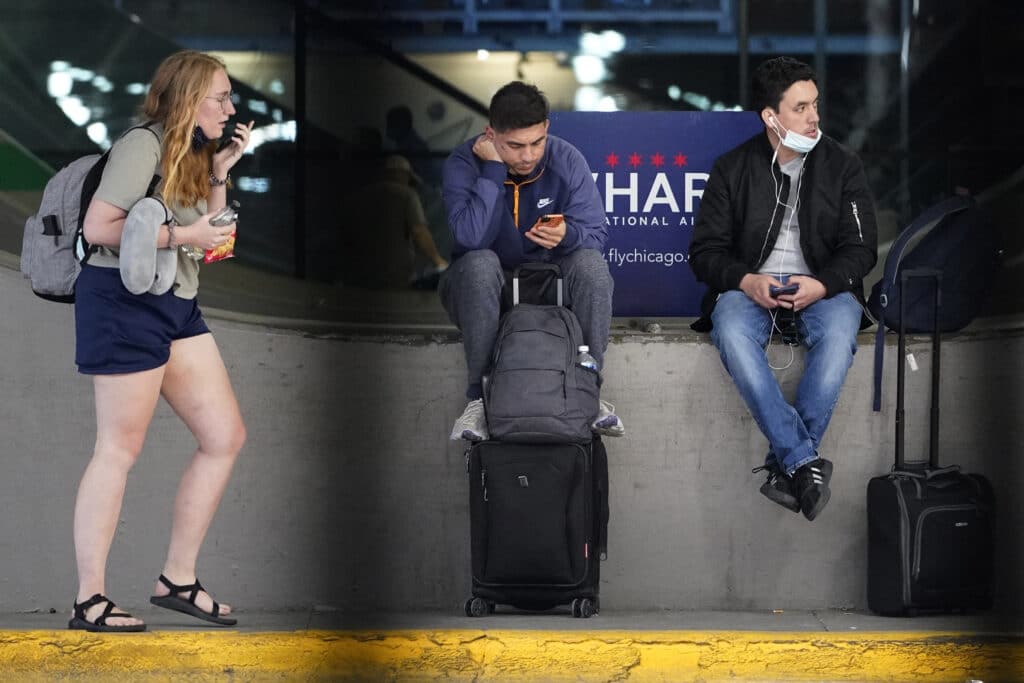 As the coronavirus pandemic winds down, Americans are expected to resume traveling en masse. Huge celebrations are back. The Associated Press has the story:

NEWARK, N.J. (AP) — Americans enjoying newfound liberty are expected to travel and gather for cookouts, fireworks, concerts and beach outings over the Fourth of July weekend in numbers not seen since pre-pandemic days.

Yet lingering restrictions, worker shortages and significant numbers of unvaccinated people mean some may not be as free as they would like to be.

And there are fears that the mixing of large numbers of vaccinated and unvaccinated Americans at a time when the highly contagious delta variant is spreading rapidly could undo some of the progress made against the scourge.

Nashville is expecting as many as 400,000 people to stream into the city for its July Fourth celebration featuring country star Brad Paisley. In Massachusetts, the Boston Pops’ Independence Day concert is back, but the show that usually draws hundreds of thousands to the Charles River esplanade in Boston will be held 100 miles away at the Tanglewood music center.

Beaches and lakefronts are expected to be packed as well. In Southern California, Huntington Beach is planning one of the biggest celebrations on the West Coast, a three-day festival that could bring in a half-million people.

Elizabeth Driscoll plans to enjoy the festivities in Cheboygan, Michigan, including a parade down Main Street, a trip to a farmers market and a family party on a lake, all ahead of the fireworks display over the Straits of Mackinac. Last year, the parade and fireworks were canceled.

“You can feel it all over town, just an influx of people on the tourism side, and people who live here are out and about,” she said. “There’s good energy.”

At the same time, airlines have been struggling to get enough crew members to fly their planes. Pools and beaches have been hit with a shortage of lifeguards. And restaurants and bars in tourist destinations have had to scale back hours because of a lack of help.

President Joe Biden has welcomed the holiday as a historic moment in the nation’s recovery from a crisis that has killed over 600,000 Americans and led to months of restrictions that are now almost gone. He plans to host more than 1,000 people at the White House — first responders, essential workers and troops — for a cookout and fireworks to mark what the administration is calling a “summer of freedom.”

“I’m going to celebrate it,” Biden said Friday ahead of the holiday. “There’s great things happening. … All across America, people are going to ballgames, doing good things.” But he also warned that “lives will be lost” because of people who didn’t get vaccinated.

The U.S. is averaging about 12,000 new cases and 250 deaths a day thanks to vaccines that have been administered to two-thirds of the nation’s adults. But that is short of the goal of 70% by July 4 that Biden set. Vaccine hesitancy remains stubborn, especially in the Deep South and West, allowing the delta variant to spread throughout the country.

AAA forecasts that more than 47 million people will travel by car or plane this weekend in the U.S., a return to 2019 levels and 40% higher than last year. That includes 3.5 million airline passengers.

At the Newark, New Jersey, airport, travelers waited in long check-in lines Wednesday and encountered flight delays that tested their patience. Some were just happy to get on a plane after vacation plans were disrupted last year by COVID-19 restrictions.

Rhetta Williams, a 54-year-old manager at a pharmaceutical company, was traveling to Charleston, South Carolina, for a family reunion with about 50 relatives that was postponed a year ago because of the virus.

“And we’re not going to be practicing any social distancing,” she said, laughing.

Zach Carothers, a 21-year-old computer science student, flew from South Carolina to Newark for a weekend at the Jersey Shore, where people have been flocking back.

“It’s nice to get back to it after quarantining for so long,” Carothers said, adding that he is looking forward to a vacation that will “definitely have celebratory beers.”

While masks have been shed around the country even in indoor spaces, the Transportation Security Administration emphasizes that they are still required at airports and on planes — a restriction not everyone is accepting gracefully. Airlines are reporting increasing cases of disruptive passengers refusing to wear masks.

Fireworks are likely to draw some of the biggest crowds many communities have seen in months.

“Outdoor stuff remains, I think, pretty safe for unvaccinated or vaccinated people,” said Dr. Ashish Jha, dean of Brown University’s School of Public Health. “Probably a packed outdoor concert is not ideal, but short of that, outdoor activity is safe for people. Watching fireworks is fine.”

Moving the party indoors is considered less safe, at a time when some states have less than half their population fully vaccinated.

“I’m concerned about most of the country,” said Dr. Lynn Goldman, dean of George Washington University’s school of public health. “I think it’s premature to declare it over, especially because of what we see in other parts of the world.”