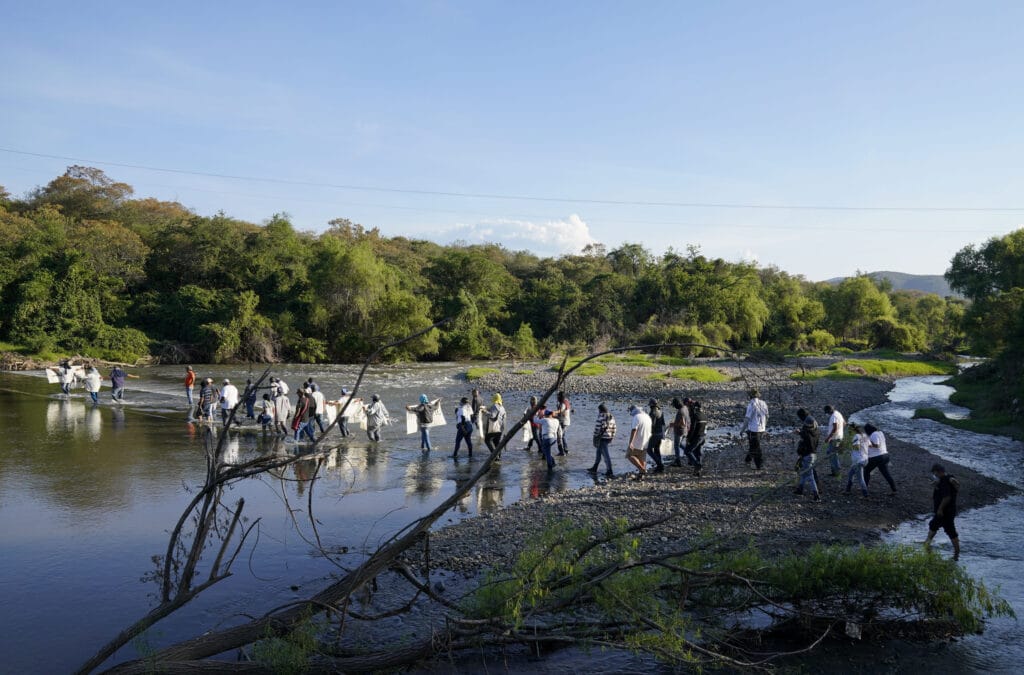 The Jalisco cartel has become more powerful in Mexico’s western state of Michoacan and the government is running out of options to combat the violence. Civilians who are fed up with the government’s strategy of merely keeping the cartels separated are lashing out at the government. The Associated Press has the story:

AGUILILLA, Mexico (AP) — The Mexican government is rapidly running out of tools to control the expansion of the feared Jalisco cartel on the front lines of Mexico’s narco war in the western state of Michoacan and the stalled ground effort is being supplemented by an increasingly sophisticated aerial conflict.

“If they try to come in here again, we’ll put 2,000 people out here to stop them,” said Habacuc Solorzano, a 39-year-old farmer who leads the civilian movement associated with the cartel. His statement, like most of what comes out of the Jalisco side, is not mere boasting: He already had about 500 local residents marching last week— then wading across a river — to confront an army squad blocking a dirt road leading out of Jalisco territory.

Residents of Aguililla are fed up with the army’s strategy of simply separating the Jalisco and the Michoacan-based Viagras gang. The army policy effectively allows the Viagras — best known for kidnapping and extorting money — to set up roadblocks and checkpoints that have choked off all commerce with Aguililla. Limes and cattle heading out, or supplies heading in, must pay a war tax to the Viagras.

“We’d rather be killed by you than killed by those criminals!” one demonstrator shouted at soldiers during a tense, hour-long confrontation between demonstrators and a squad of a dozen troops who took cover behind a barricade of car tires. Many of the demonstrators carried rocks and powerful slingshots, but did not use them.

The residents want the army to either fight both cartels, or at least let the two gangs battle.

“Let the two cartels fight it out and kill each other,” another demonstrator shouted. “Jalisco is going to beat everybody!”

That view is widespread. “What we need is for one cartel to take control, stop the fighting and impose some semblance of calm,” said a local priest. “Everything indicates that group is the Jalisco cartel.”

Above all, what residents want is for the Viagras’ checkpoints to be cleared and the road opened again. Because they must occasionally pass through those roadblocks, none of the residents wanted to give their names for fear of reprisals.

But one explained it this way to the army squad: “The only road into Aguililla is blocked and controlled by a cartel that is only 500 yards away from you, and you (the army) are not doing anything to protect our right to travel freely,” he said. “You don’t know how hard it is to be paying a war tax that is being used to kill us.”

That is actually a fairly accurate description of government policy: preserving the status quo, and making each cartel stay in its own territory.

But Jalisco won’t accept the government as arbiter of drug cartel territorial divisions; the local Jalisco cartel leader says the army is only trying to protect the weaker of the two gangs, the Viagras, for reasons of corruption.

Jalisco is everywhere in Aguililla, from pickups and homemade armored cars bearing the cartel’s initials to the small trampolines the gang installed for children in every village.

Some residents say they are strongly pressured to participate in the protests, fearing their water or electricity might be cut off if they don’t. Others are just tired of paying the Viagras’ war taxes and being cut off from the outside world. One female protester described how her father died in early 2020 because the Viagras wouldn’t allow them past to get to a hospital.

Dozens of cartel gunmen openly wear bulletproof vests emblazoned with the group’s Spanish initials, “CJNG” — Jalisco New Generation Cartel — on the back, and on the front, “FEM” — “Mencho’s Special Forces,” a reference to the nickname of the cartel’s leader, Nemesio Oseguera.

Jalisco is the one cartel in Mexico that doesn’t hide what it is, and doesn’t play to the politics of press relations or restraint.

“We’re narcos,” said the local Jalisco leader, who did not give his name. “Everybody should mind his own business.” His beef with the Viagras and other local gangs he’s fighting is that “they want everything for themselves.”

Jalisco keeps its sizeable army of troops running with a potent mixture of money — the cartel has a lot, from trafficking fentanyl and meth into the United States — and cocaine, which it flies in from Costa Rica.

As the local boss stands at an impromptu street-side command post, a pickup full of Jalisco gunmen with AR15 assault rifles pulls up. The driver says, “The Scorpion said he needs some stuff,” and the boss reaches into his own truck and hands the co-pilot a plastic bag with what appears to be a kilogram brick of cocaine, apparently for ”the troops.”

Jalisco understands brute force; for the moment, it doesn’t bother Aguililla residents much, because it doesn’t have to. But if it suspects a resident of actively working for or passing information to the Viagras, that person’s life expectancy is likely to be very short.

The local boss shrugs off the government’s assertions that cartels like Jalisco are having trouble finding young recruits, due to the current administration’s youth employment and training programs.

“It depends on the kind of youth,” he says. “Those that sleep under bridges, they come here and they think they’re in Paris. There’s food here.”

“I make it clear to my people that they come here to fight,” he adds.

Beyond food, regular pay and unlimited drugs, the Jalisco cartel also offers its young foot soldiers a kind of family structure. Everyone, even the local boss, refers to their immediate superior as “Apa,” the way a child would say “Papa.”

Both cartels have developed bomb-carrying drones, and the most feared warrior on these battlefields is the “dronero,” or drone operator. While initially crude and dangerous to load and operate — and still worrisomely indiscriminate — drone warfare has improved, and it’s not unusual to see metal barn or shed roofs opened like tin cans from the impact of drone explosions.

Locals also claim — though there is little evidence beyond a few craters in roads — that the cartels are starting to use land mines.

To handle the increasing firepower in the conflict, the Mexican government has resorted to playing a powerful card to outgun the Jalisco cartel: Blackhawk helicopter gunships equipped with rotating-barrel electric machine guns that can fire 6,000 rounds per minute.

It is a weapon that almost defines ‘’indiscriminate blanket fire” and is banned in most countries in civil conflicts. It is the kind of weapon President Andrés Manuel López Obrador says he no longer wants.

But for the moment, such massive firepower is the only thing holding Jalisco back.

“They shot up and burned two of our trucks,” the local gang boss said of the gunships. “When the soldiers arrive with a helicopter, there’s nothing you can do, you just get out of the way.”

It’s not clear that is going to be the case for long. Jalisco is known for two things: being the most heavily armed cartel in Mexico, and the only one to have ever shot down a military helicopter.

In 2015, Jalisco cartel gunmen brought down a Eurocopter transport helicopter with a rocket-propelled grenade, killing eight soldiers and a police officer. While the choppers Jalisco faces now are Blackhawks, there is little doubt the cartel can come up with something punchier.

The newspaper El Universal published transcripts of intercepted cartel communications where a leader can be heard coaching a sniper with a .50-caliber rifle to put armor-piercing rounds through the door of a helicopter. The Mexican army did not respond to request for comment on this, or other issues.

In the past, Jalisco has obtained squad machine guns, .50-caliber sniper rifles and 40mm grenades and launchers.

The government, afraid of the kind of bloodbath that started in 2018 when the Jalisco cartel moved into the neighboring state of Guanajuato, is now left with an unworkable policy of defending gang territorial divisions, and an increasingly narrow military advantage.

An unnamed army captain who tried to talk with the Aguililla protesters expressed the predicament.

“How can it be that Mexicans are killing other Mexicans?” the captain said. “This just can’t be.”