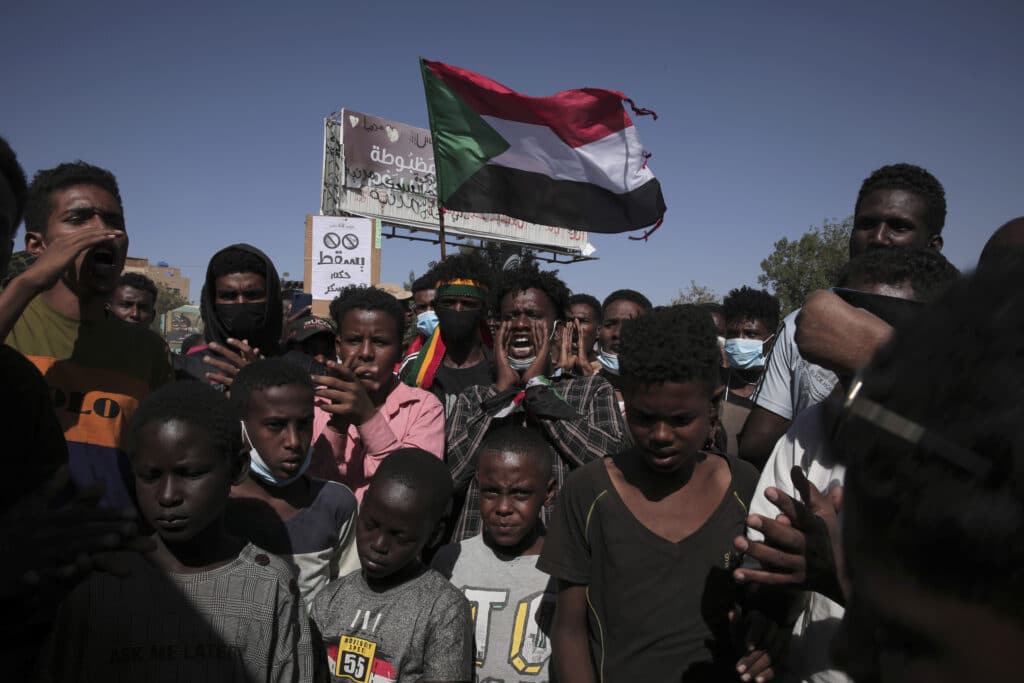 After over 17 people were killed in West Darfur last week, thousands of people took to the streets in Khartoum to protest the military junta that took over Sudan last October. The junta signed a power-sharing deal with the prime minister, but isn’t enough to stem the unrest. The Associated Press has the story:

CAIRO (AP) — Thousands of Sudanese took to the streets on Thursday in the capital of Khartoum, renewing their demand for a fully civilian government and denouncing the country’s military rulers who were behind the October coup.

Since the takeover, protesters have repeatedly taken to the streets in some of the largest demonstrations in the past years. Sudanese security forces have cracked down on the rallies and have killed more than 40 protesters so far, according to activist groups.

Meanwhile, the Sudanese Doctors Committee, which is part of the pro-democracy movement, said that 17 people were killed in clashes between Arab and non-Arab tribes in the restive province of West Darfur last week. The tribal violence is unrelated to the anti-coup protests.

Thursday’s demonstrations followed the military’s signing of a power-sharing deal with the prime minister, after he was released from house arrest and reinstated by the generals as head of government. The agreement came almost a month after the generals orchestrated the coup that deposed Prime Minister Abdalla Hamdok and detained dozens of politicians and activists.

Hamdok’s reinstatement was the biggest concession made by the military since its Oct. 25 coup but leaves the country’s transition to democracy mired in crisis. Sudan’s key pro-democracy groups and political parties have dismissed the deal as falling short of their demands for a fully civilian rule.

Sudan has been struggling with its transition to a democratic government since the overthrow of autocrat Omar al-Bashir in 2019, following a mass uprising against three decades of his rule.

Protesters marched Thursday through Khartoum, beating drums and waving Sudanese flags. Many chanted: “The people want to bring down the regime” and “Woe to the military!”

The Sudanese Professionals Association, the group that spearheaded the uprising that culminated in al-Bashir’s ouster, had called for the rallies and vowed to carry on with protests until “the corrupt military junta is brought down and prosecuted for their crimes.”

Similar protests were held elsewhere in Sudan, including in the provinces of Kassala, North Darfur, West Kordofan and Northern Sudan. Activists circulated videos on social media showing tear gas being fired at protesters. There was no immediate word of any injuries.

The deal that Hamdok signed with the military on Sunday envisions an independent, technocratic Cabinet to be led by the prime minister until new elections are held. However, the government would still remain under military oversight though Hamdok claimed he will have the power to appoint ministers.

The agreement has angered Sudan’s pro-democracy movement, which accuses Hamdok of allowing himself to serve as a fig leaf for continued military rule.

The deal also stipulates that all political detainees arrested following the Oct. 25 coup be released. So far, several ministers and politicians have been freed. The number of those still in detention remains unknown.

On Wednesday, Hamdok told a local Sudanese television channel that unless all are released, “the deal will be worthless.”

The statement by the doctors committee on the tribal violence said clashes on Nov. 17 in the West Darfur area of Jebel Moon killed 17 and wounded 12.

Earlier, Adam Regal, a spokesman for a local organization that helps run refugee camps in Darfur, told The Associated Press that the conflict grew out of a land dispute. He alleged that Rapid Support Forces, a paramilitary unit controlled by the country’s second most powerful general, had eventually intervened on behalf of Arab tribes. The clashes subsided on Friday, he said.

The International Organization for Migration said Wednesday that 9,800 people have been displaced in Jabel Moon. Some fled to nearby villages and others crossed the border into Chad. At least six villages were affected, some of them were burned down, according to the U.N. migration agency.

In January, tribal violence killed 470 people in Darfur, in one of the worst episodes since the vicious war of the 2000s there. The latest bloodletting has sparked fears the region could slide back into conflict and raised questions over the government’s ability to implement a peace deal and protect civilians.

Al-Bashir had waged a scorched-earth counterinsurgency in Darfur against ethnic minority rebels who blamed the government for economic and political marginalization. Government forces and primarily Arab militias known as janjaweed are accused of widespread atrocities in the conflict, which killed over 300,000 people and forced 2.7 million to flee. Al-Bashir, now imprisoned in Khartoum, was indicted for war crimes and genocide by the International Criminal Court for the Darfur violence.

The fighting in Darfur gradually declined but violence continues to flare, as Arab militias roaming the provinces remain heavily armed and retain control over land they seized.