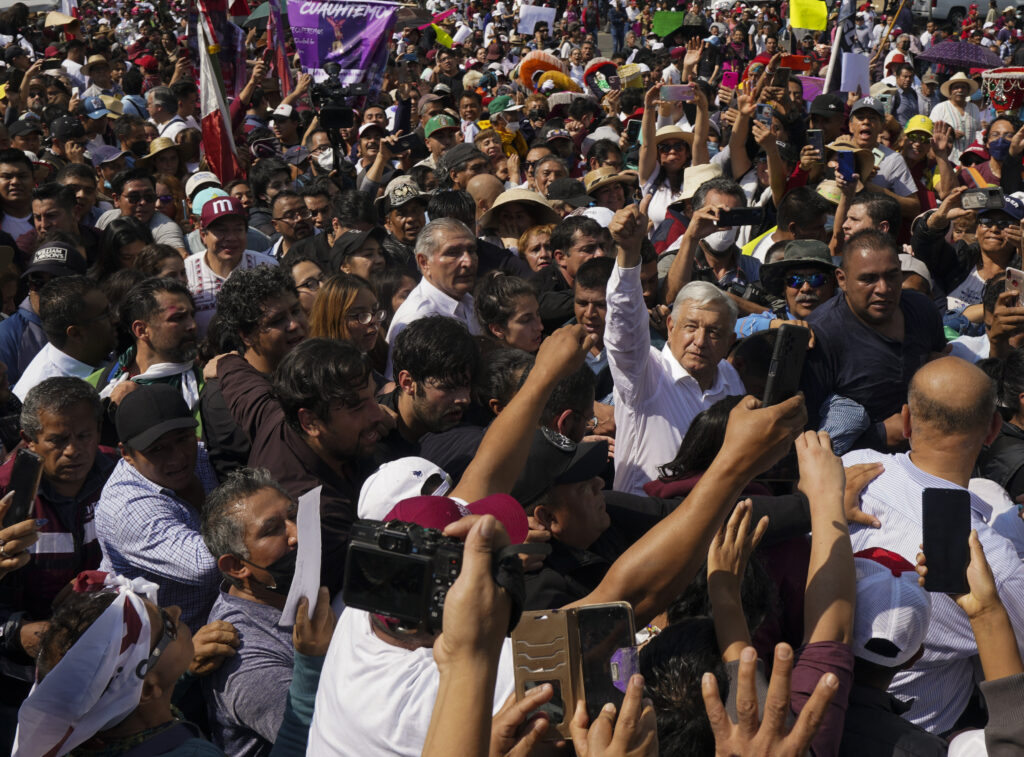 Hundreds of thousands marched with Mexican President Andres Manuel Lopez Obrador on Sunday in a massive demonstration through the center of the country’s capital to show their support for the head of state before a 2024 general election. Marching bands accompany the demonstration and even president-shaped stuffed toys were carried with protesters who filled Mexico City’s Reforma Avenue, chanting “It’s an honor to be with Obrador.” The Associated Press has the stoy:

Hundreds of thousands of people marched in Mexico’s capital Sunday in a show of support for President Manuel López Obrador, who before assuming the presidency had led some of the country’s biggest protests.

The “people’s march” marked four years in office for the leftist leader and was a response to a large opposition march two weeks ago to protest López Obrador’s proposal to reform the country’s electoral authority.

The president himself led Sunday’s march through central Mexico City, which was accompanied by mariachi music, singing and a festive atmosphere. Many participants had been bused in from provinces across Mexico in trips organized by the ruling Morena party, unions and social groups.

The opposition insisted that many participants were forced to join the march, but López Obrador said he had not put “a penny” of the federal budget into the march. Demonstrators questioned said they had come voluntarily.

But in many cases the transportation was provided by local governments or politicians who wanted to be well thought of inside the ruling party.

Gaby Contreras, a former Morena mayor, brought a group from Teoloyucan, north of the capital, and was the only one of her group authorized to speak. “We are here to support the president.”

Pedro Sánchez, a bricklayer who came with his wife from the Tehuantepec isthmus in southern Mexico, said his municipality organized everything. Hundreds of buses that had brought participants lined nearby streets.

“I come from Sonora by plane and I paid for my ticket,” said lawyer and López Obrador supporter América Verdugo.

Nelly Muñoz, an administrator from the National Autonomous University of Mexico, said “it’s called ‘organization’ and and believe it or not, it’s what we’ve been doing since 2006.”

That date was a reference to the year López Obrador came within 0.56% of the vote of winning the presidency and denounced his loss as fraudulent. Many supported him, launching a mass protest movement.

López Obrador was elected to the presidency 12 years later and his Morena party won four of six races for governor in last year’s midterm elections, giving the ruling party control of 22 of Mexico’s 32 states, an important advantage heading into the 2024 presidential elections.

But the government has been criticized for its increased use of the military, laws whose constitutionality has been questioned in the courts, and its support for controversial mega-projects, Some people who support the president are now are his critics.

Clara Jusidman, founder of INCIDE Social, an NGO specialized in democracy, development and human rights, said that what is important isn’t the number of participants in the march, but “why they participated.”

She said many Mexicans feel compelled to participate because they receive money transfers from the government, which is its main way of supporting those in need. Others want to be in the good graces of the party ahead of the 2024 local, state and presidential elections. The leading contenders to replace López Obrador as Morena’s presidential candidate in 2024 appeared in the march.

But there was no shortage of fans of Mexico’s president, who maintains a high approval rating.

Alberto Cervantes, who traveled from Los Angeles to join the march, had the president’s face and “AMLO 4T” tattooed on his arm. AMLO is the popular acronym for López Obrador’s name, and 4T refers to the “4th Transformation,” which López Obrador says he is carrying out in Mexico.

Lorena Vaca, who waved a flag of the LGBTQ community, said she came to ask for more attention for women and transgenders.

“There are things we don’t agree with… but that doesn’t mean we don’t support the Fourth Transformation process,” said Aurora Pedroche, a member of a critical sector within Morena who questions the party’s leadership but supports the president.

Mexico’s opposition had called a massive march because they feared López Obrador planned to use his proposed reforms to compromise the electoral institute’s independence and make it more beholden to his party.

López Obrador repeatedly criticized the march and days later said he would call his own march.

“You can’t make a change overnight and Andrés Manuel is not infallible,” Pedroche said. “But we have worked hard and what we don’t want is for this to be reversed.”