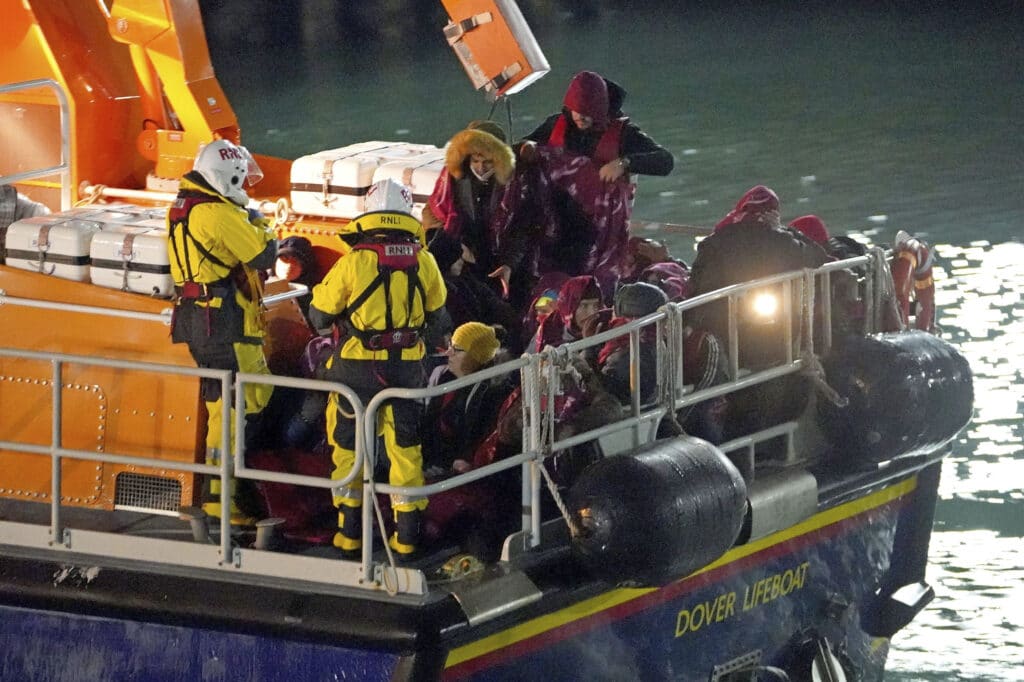 The English Channel is a dangerous place, the tides, wind, weather, and it is the busiest shipping lanes in the world, it is no place for small groups of people to try and cross in small boats, but that is what is happening, and some die in those treacherous waters. The question is why these people are putting their lives in peril, in an endeavor that will almost certainly end in death, and the answer is… one, France does nothing to stop these people looking for a brighter future in Great Britain, and two, the Brits are too soft and cannot stop them. As reported by the AP:

Amid the finger pointing, British lawmakers on Thursday will debate the soaring number of migrants who are crossing the channel in small boats

LONDON (AP) — The deaths of at least 27 people in the English Channel is fueling tensions between the U.K. and France over how to stop migrants from crossing the world’s busiest waterway in small boats.

Despite a pledge from British Prime Minister Boris Johnson and French President Emmanuel Macron that they would “do everything possible” to stop people smugglers from endangering lives, politicians on both sides of the channel are already blaming their counterparts for failing to prevent Wednesday’s tragedy.

U.K. officials criticize France for rejecting their offer of British police and border officers to conduct joint patrols along the channel coast with French police. French authorities say Britain is stoking the crisis because it is too easy for migrants to remain in the country and work if they manage to cross the channel.

Amid the finger pointing, British lawmakers on Thursday will debate the soaring number of migrants who are crossing the channel in small boats. Macron is scheduled to discuss the issue with European Union officials.

Meanwhile, migrants are continuing to brave frigid weather in small boats and unseaworthy dinghies in hopes of getting to British shores to seek asylum or better opportunities. More than 25,000 people have made the dangerous Channel crossing so far this year, about triple the total for the whole of 2020.

“This tragedy was completely predictable; indeed, it was predicted, and it was completely preventable,” Zoe Gardner, of the Joint Council of Welfare for Immigrants, told the BBC. “This has to be a time for our government to mark a turning point.”

“We need to offer people alternatives to the smuggling boats.”

Johnson said Wednesday it was clear that French operations to stop migrant boats from leaving French shores “haven’t been enough,” despite millions of pounds of support promised by the British government this summer meant to fund more police patrols on French beaches.

But Calais lawmaker Pierre-Henri Dumont told the BBC that more patrols “will not change anything because we have 200 to 300 kilometers (125 to 185 miles) of shore to monitor 24/7.”

“I think it’s time for both our governments to stop blaming each other and to try and talk to each other and find real solutions, not a crazy solution such as having more and more people patrolling, sending the British Army to the French shore,” Dumont said. “That is not acceptable and will not change anything.”

On Thursday, Natalie Elphicke, a Conservative member of Britain’s Parliament for Dover and Deal on the southern English coast, said it was “absolutely vital that the French police stop the boats leaving in the first place.”

“Rather disappointingly, yesterday we saw the French police in footage standing by while boats got together and migrants got it them and they went off the shore in France,” she told The Associated Press. “Britain has offered to help with people and resources, and I hope the French will now take up that offer and other European countries will come to France’s aid.”

Previous Article
Is the United States ready to take on China?
Next Article
Australia sending help to Solomon Islands as unrest grows