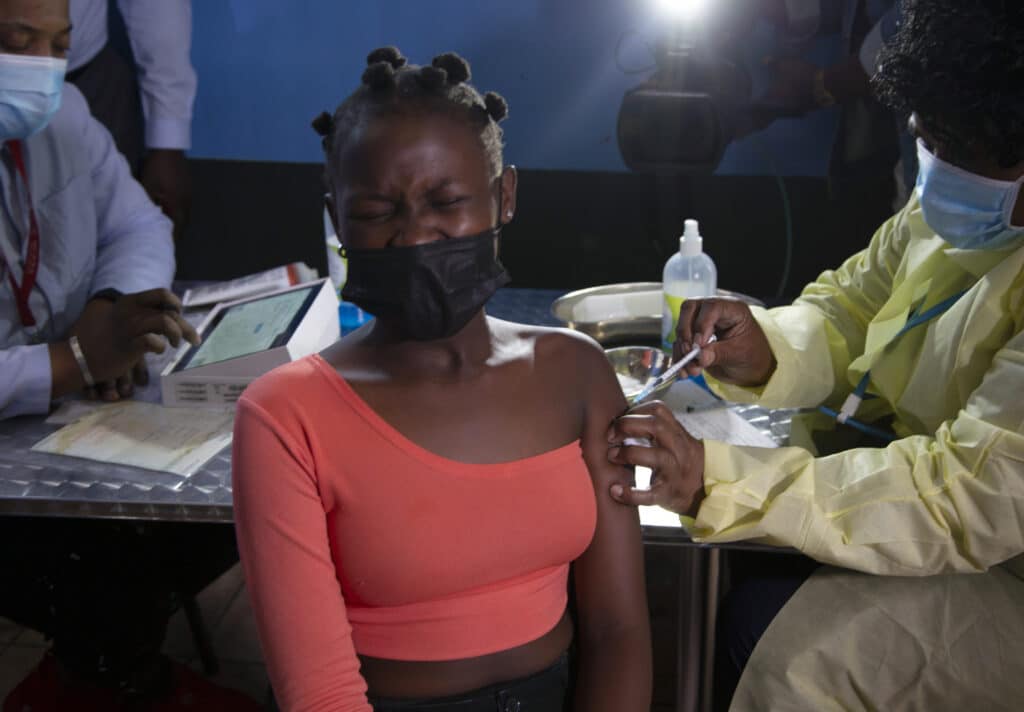 Identified as B.1.1.529, a new coronavirus variant has been identified in South Africa that has a high number of mutations and is rapidly spreading among young people in Gauteng. There has been a dramatic rise in new infections in the last few days in the country. The Associated Press has the story:

B.1.1.529 variant rapidly spreading throughout South Africa’s most populous province

JOHANNESBURG (AP) — A new coronavirus variant has been detected in South Africa that scientists say is a concern because of its high number of mutations and rapid spread among young people in Gauteng, the country’s most populous province, Health Minister Joe Phaahla announced Thursday.

The coronavirus evolves as it spreads and many new variants, including those with worrying mutations, often just die out. Scientists monitor for possible changes that could be more transmissible or deadly, but sorting out whether new variants will have a public health impact can take time.

“Over the last four or five days, there has been more of an exponential rise,” he said, adding that the new variant appears to be driving the spike in cases. Scientists in South Africa are working to determine what percentage of the new cases have been caused by the new variant.

Currently identified as B.1.1.529, the new variant has also been found in Botswana and Hong Kong in travelers from South Africa, he said.

The WHO’s technical working group is to meet Friday to assess the new variant and may decide whether or not to give it a name from the Greek alphabet.

The new variant has a “constellation” of new mutations,” said Tulio de Oliveira, from the Network for Genomic Surveillance in South Africa, who has tracked the spread of the delta variant in the country.

The “very high number of mutations is a concern for predicted immune evasion and transmissibility,” said de Oliveira.

“This new variant has many, many more mutations,” including more than 30 to the spike protein that affects transmissibility, he said. “We can see that the variant is potentially spreading very fast. We do expect to start seeing pressure in the healthcare system in the next few days and weeks.”

De Oliveira said that a team of scientists from seven South African universities is studying the variant. They have 100 whole genomes of it and expect to have many more in the next few days, he said.

“We are concerned by the jump in evolution in this variant,” he said. The one piece of good news is that it can be detected by a PCR test, he said.

After a period of relatively low transmission in which South Africa recorded just over 200 new confirmed cases per day, in the past week the daily new cases rapidly increased to more than 1,200 on Wednesday. On Thursday they jumped to 2,465.

The first surge was in Pretoria and the surrounding Tshwane metropolitan area and appeared to be cluster outbreaks from student gatherings at universities in the area, said health minister Phaahla. Amid the rise in cases, scientists studied the genomic sequencing and discovered the new variant.

“This is clearly a variant that we must be very serious about,” said Ravindra Gupta, professor of clinical microbiology at the University of Cambridge. “It has a high number of spike mutations that could affect transmissibility and immune response.”

Gupta said scientists in South Africa need time to determine if the surge in new cases is attributable to the new variant. “There is a high probability that this is the case,” he said. “South African scientists have done an incredible job of identifying this quickly and bringing it to the world’s attention.”

South African officials had warned that a new resurgence was expected from mid-December to early January and had hoped to prepare for that by getting many more people vaccinated, said Phaahla.

About 41% of South Africa’s adults have been vaccinated and the number of shots being given per day is relatively low, at less than 130,000, significantly below the government’s target of 300,000 per day.

South Africa currently has about 16.5 million doses of vaccines, by Pfizer and Johnson & Johnson, in the country and is expecting delivery of about 2.5 million more in the next week, according to Nicholas Crisp, acting director-general of the national health department.

“We are getting in vaccines faster than we are using them at the moment,” said Crisp. “So for some time now, we have been deferring deliveries, not decreasing orders, but just deferring our deliveries so that we don’t accumulate and stockpile vaccines.”

South Africa, with a population of 60 million, has recorded more than 2.9 million COVID-19 cases including more than 89,000 deaths.

To date, the delta variant remains by far the most infectious and has crowded out other once-worrying variants including alpha, beta and mu. According to sequences submitted by countries worldwide to the world’s biggest public database, more than 99% are delta.

By ANDREW MELDRUM and MOGOMOTSI MAGOME