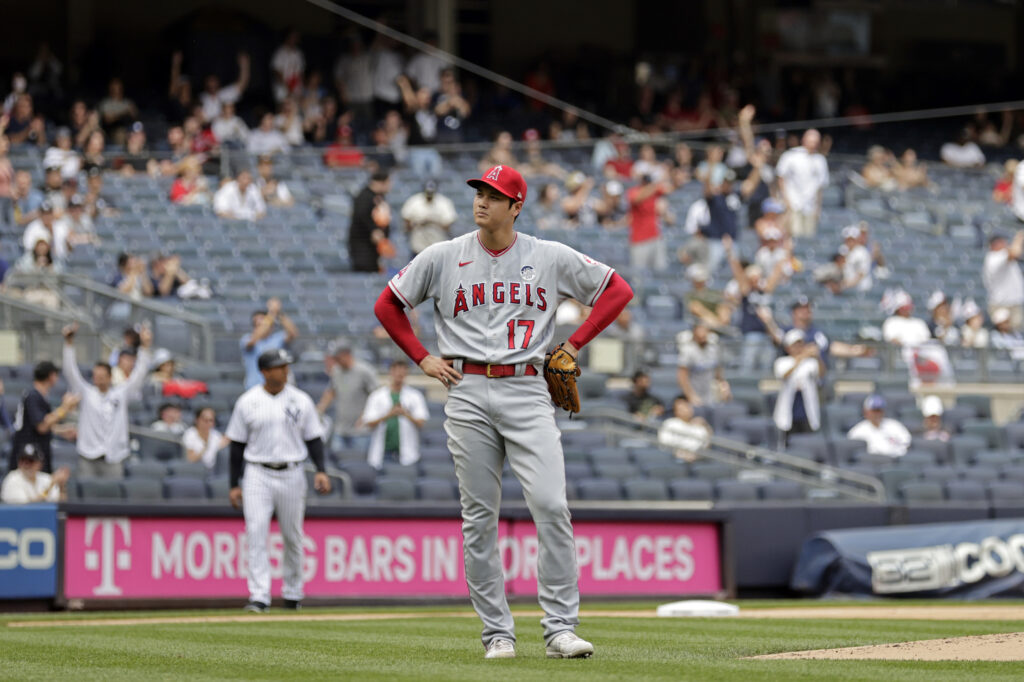 The Los Angeles Angels are having a bad losing streak, losing their seventh straight game. This time they lost to the New York Yankees 6-1. The Associated Press has the story:

The Angels lost their seventh straight, their worst skid since an eight-game slide in 2019.

The game was played under threat of thunderstorms that held off until the top of the ninth. The sky opened as Wandy Peralta finished his warmup tosses, the tarp was rolled out and a 1-hour, 28-minute delay followed.

Peralta came back after the pause and closed out his first save, striking out Ohtani to end it.

Ohtani (3-4) slogged through another disappointing day at Yankee Stadium after getting two outs and allowing seven runs in his debut on the Bronx rubber last June.

The Japanese right-hander was only a touch better in front of a sparsely attended makeup of Wednesday’s rainout, charged with four runs in three-plus innings. He did have a hit off Cortes, but he was promptly picked off by the left-hander.

The resurgent Carpenter put Ohtani behind with his third homer in six games since joining the Yankees as a free agent, a soaring fly that narrowly stayed inside the right-field foul pole. It’s the second straight game Ohtani has allowed a leadoff homer after Toronto’s George Springer got him to end an eight-pitch at-bat last Thursday.

Torres connected three batters later to make it 2-0, his 10th homer of the season to surpass his total from 2021. Judge tagged Ohtani leading off the third, a line drive that easily cleared the wall in left for his major league-leading 19th homer.

Ohtani’s velocity was up half a tick from his season average, but he didn’t induce a swing-and-miss until his 54th pitch, a fastball that struck out Anthony Rizzo to end a 10-pitch at-bat in the third. He ended with three whiffs on 45 swings, a 6.7% rate that’s second lowest in his career, better only than his first outing following Tommy John surgery in 2020, per Statcast.

Ohtani allowed two soft-hit singles to start the fourth inning, and that was enough for manager Joe Maddon. Ohtani flipped the ball in his hand and muttered to himself when Maddon emerged from the dugout.

Ohtani allowed eight hits, three of them under 80 mph. He had pitched at least five innings in his previous six starts.

In the fifth, Ohtani singled against Cortes (5-1). But Ohtani was fooled when Cortes lifted his right leg and stepped toward the plate before throwing to first for the pickoff. Cortes grinned toward his infielders as Ohtani jogged to the dugout.

Ohtani struck out against Clarke Schmidt in the eighth after taking a fastball that appeared to be just off the outside corner. Schmidt then punched out Mike Trout, who struck out three times Thursday to extend an 0-for-12 slide.

Schmidt allowed a run and loaded the bases before handing off to left-hander Peralta, who got a two-out fly ball from Jared Walsh to preserve a five-run lead.

Cortes threw just 11 pitches over his final two innings, providing the sixth straight start by a Yankees pitcher of at least six innings, best for the franchise since 2018.

The crafty lefty scattered five hits, walked two and struck out seven on 96 pitches. He dropped his ERA to 1.50, trailing only Texas’ Martin Perez at 1.42 for the major league lead.

Carpenter, released by the Rangers this month and grabbed off the scrap heap by New York, is the third Yankee to homer for his first three hits with the franchise, joining Kyle Higashioka in 2018 and Alfonso Soriano in 1999-2000, according to the Elias Sports Bureau.

Maddon had a lengthy discussion prior with umpires prior to the sixth inning related to an issue with the electronic pitch-calling system.

Ohtani could match Hall of Famer Jimmie Foxx for a bit of history if Game 2 happens. Foxx is the only player to start both ends of a doubleheader, one of them on the mound, when he pitched the opener for the Philadelphia Phillies against the Boston Braves on Sept. 2, 1945, according to Elias. Foxx, who hit 534 career homers, made nine pitching appearances in ’45, his final big league season.

Maddon said Ohtani would be a gametime decision as designated hitter in the late game.

Second base umpire Chris Guccione was drilled in the back by Jose Trevino’s grounder in the fifth, but he bounced up quickly and gave a thumbs-up to cheering fans.

Angels: LHP Jhonathan Diaz was added as Los Angeles’ 27th man for the doubleheader and pitched four innings in the opener.

Yankees: OF Estevan Florial was called up as New York’s 27th man.