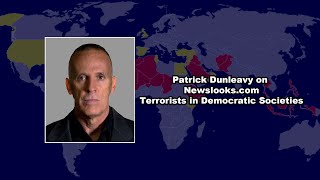 Do the democratic societies offer a save heaven to terrorist who takes advantage of its constitutions to spread their ideologies and gain the minds of its citizens?

– should the war against terrorism respect the right of terrorists? And how does that help them to manipulate the judicial systems?

– Like what Anouar Alwlaki was doing in the U.S., Mohamed hajib – a former convicted terrorist living in Germany- is expressing a lot of anti-American messages, should the US act now or wait until his words turn into acts?

– talk to us about the fanatic Islamic institutions in the west, did we allowed them to influence our society and how can we control their activities without harming their constitutional rights?

– should the US put more pressure on Germany and other allies to act against terrorists internet activities?

All these questions and others are answered by the American academic and expert on terrorism, Patrick Dunleavy.

Patrick Dunleavy is a Senior Fellow for the Investigative Project on Terrorism.  He is a former Deputy Inspector General for New York State and author of “The Fertile Soil of Jihad”.  He has testified as an expert witness before the House Committee on Homeland Security concerning the threat of Islamic Radicalization.  He has also taught classes on terrorism for the USAF’s Special Operations School, entitled “Dynamics of International Terrorism”