Pence sounding like he may return to elected office 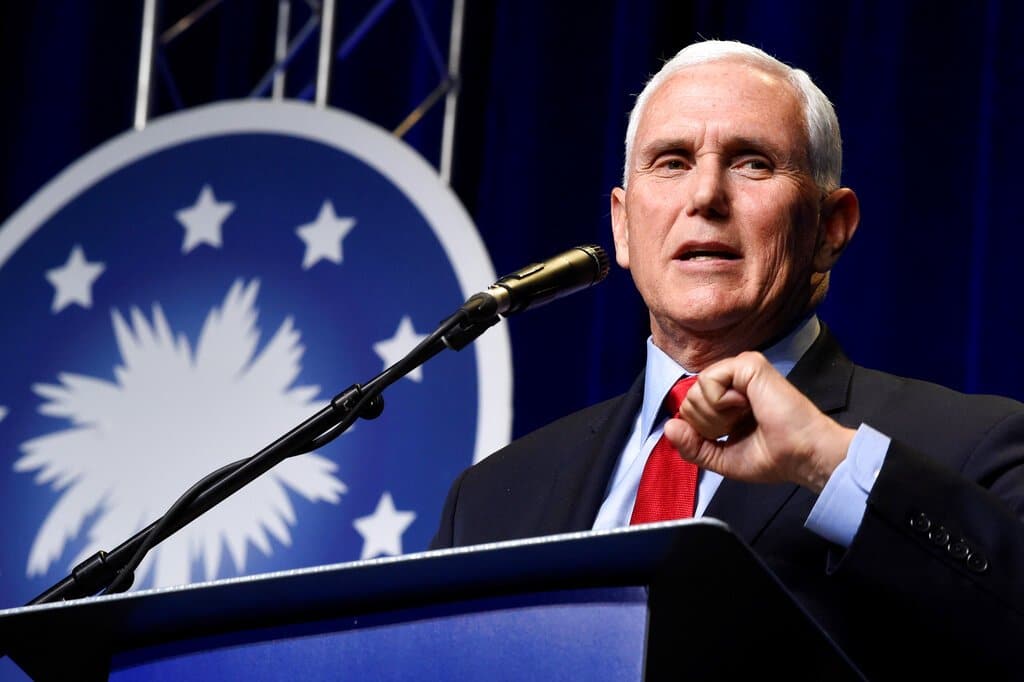 A speech former Vice President Mike Pence gave to a Christian group in South Carolina sounds like he may be considering running for office again. He railed against liberals in his speech. The Associated Press has the story:

COLUMBIA, S.C. (AP) — Former Vice President Mike Pence, positioning himself for a possible return to elected office, told an audience in early-voting South Carolina that he will spend the coming months “pushing back on the liberal agenda” he says is wrong for the country.

“We’ve got to guard our values … by offering a positive agenda to the American people, grounded in our highest ideals,” Pence told an audience of several hundred on Thursday at a Columbia dinner sponsored by a conservative Christian nonprofit. “Now, over the coming months, I’ll have more to say about all of that.”

The choice of South Carolina for Pence’s first public address since the end of the Trump administration has definite political overtones, helping him develop exposure for a potential 2024 presidential bid. The state holds the first presidential primaries in the South, and candidates of both major parties typically spend more than a year in South Carolina ahead of those votes, introducing themselves and trying to secure support.

Republican candidates use South Carolina as a proving ground to test their “pro-life” mettle. Thursday’s event, hosted by Palmetto Family Council, also gave Pence a backdrop for some of the issues for which he long advocated as an Indiana congressman-turned-governor, such as restrictions on abortion and support for the overturn of Roe v. Wade.

Palmetto Family — which lobbies for what it considers to be “biblical values,” such as heterosexual marriage — most recently helped push through a ban on most South Carolina abortions, a law now being challenged in federal court.

“We will stand with the right of every American, of every faith, to live, to work, to speak and to worship according to the dictates of their conscience,” Pence said.

Pence, who since leaving office has been doing work with the Heritage Foundation and Young America’s Foundation, has not indicated if he plans a future run. As vice president, he made numerous trips to South Carolina, meeting several times with Gov. Henry McMaster for coronavirus-related forums and campaigning in the state for U.S. Sen. Lindsey Graham and U.S. Rep. Nancy Mace.

Not clear yet whether Trump will run for president again

But the question of whether Pence’s former boss will run again still looms large for the possible Republican field. Trump has not explicitly stated his plans but has teased a possible bid, saying Thursday on Fox Business that he’s “100%” thinking about running in 2024 — and would even possibly consider Florida Gov. Ron DeSantis as his running mate.

Earlier this month, another possible GOP contender, former U.N. Ambassador Nikki Haley, said when asked about 2024 by The Associated Press that she would stand down if Trump opted to run again. Former Secretary of State Mike Pompeo has launched an aggressive schedule, visiting states that will play a pivotal role in the 2024 primaries and signing a contract with Fox News Channel. DeSantis has been courting donors, including in Trump’s backyard, with a prominent speaking slot before the former president at a GOP fundraising retreat dinner at Mar-a-Lago, the Florida resort where Trump now lives.

On Thursday, Pence highlighted accomplishments of the Trump administration, including three successful confirmations of U.S. Supreme Court justices, withdrawal from the Iran nuclear deal and relocation of the U.S. Embassy in Israel to Jerusalem.

He also recalled fondly their 2016 campaign, saying that Trump told him at the close of that year’s GOP convention in Cleveland that the two of them would campaign hard, “and then he looked over at me, and he hit me in the shoulder, and he said, ‘And then it’s going to be great.'”

Earlier this month, Trump told Republican donors he was “disappointed” in Pence.

South Carolina Democratic Chair Trav Robertson said Pence was coming to the state to “try and salvage his relationship” with Trump supporters irked that Pence didn’t support efforts to block certification of the 2020 presidential election.

On Thursday, Pence pledged to reveal more of his ideas soon, promising that he would be challenging the Biden administration’s “avalanche of liberal policies” as he ramps up speaking engagements around the country.

Meg Kinnard can be reached at http://twitter.com/MegKinnardAP.

Previous Article
Disneyland, rest of California opening up
Next Article
Morocco scolds Spain for receiving the leader of the Polisario