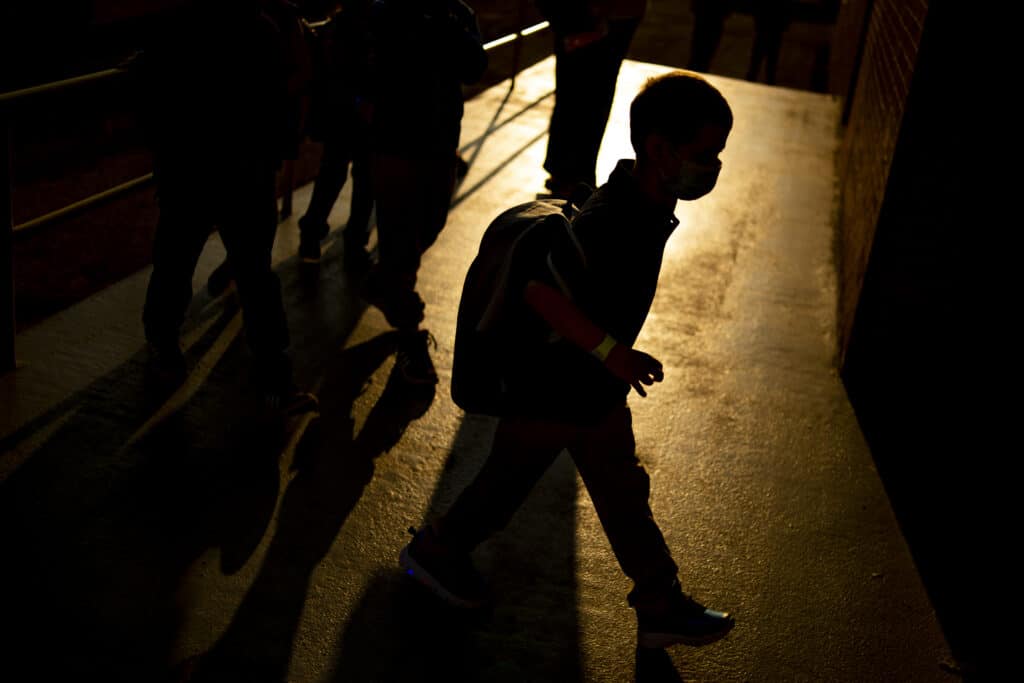 A lawsuit will be heard in court in the next few days over a large school district in Phoenix defying a new state law prohibiting mask mandates. The school district argues the law doesn’t go into effect until September 29. The Associated Press has the story:

PHOENIX — A Phoenix school district wants a lawsuit over its COVID-19 mask mandate, which could be a test case for other districts.

Attorneys for Phoenix Union High School District argued Wednesday at a preliminary hearing that a state law banning such policy isn’t in effect yet. They say the legislation that includes the ban doesn’t take effect until Sept. 29.

A biology teacher filed a lawsuit this week asking for a temporary restraining order on the measure, calling it unlawful. Both sides will give full arguments next week.

MORE ON THE PANDEMIC:

— Microsoft: US workers must be fully vaccinated

HAVANA — Cuba’s hot spot for COVID-19 infections has shifted to the central province of Ciego de Avila, where officials are converting hotels into hospitals.

Instead of tourists, the Hotel Ciego de Avila will hold up to 240 low-risk pediatric patients, officials say, while the Las Canas Motel will have 53 beds for pregnant women with the coronavirus.

They are also ordering isolation of whole households when a virus is detected.

Cuba’s national direct of epidemiology, Francisco Durán, said Wednesday that the province accounted for 23 of the 98 new deaths from COVID-19 recorded the previous day in the country of 11 million people — the nation’s highest death toll yet in the pandemic.

The province of some 430,000 people had about twice as many deaths as in the capital of Havana, a city of 2 million.

Vaccines from the Chinese plant, which will come into operation in Santiago in the first quarter of 2022, will be exported to other parts of Latin America. The goal is to produce 50 million vaccine doses a year.

A vaccine research and development center will be built in Chile, government officials and Sinovac executives announced. The center will be located in the port of Antofagasta, some 1,400 kilometers (870 miles) north of Santiago.

Chile, which has 19 million people, has received 29.2 million vaccines, of which 19.6 million were from Sinovac. Chile has one of the highest rates for vaccination in the world.

NEW YORK — The nation’s largest nursing home operator told its workers this week they will have to get COVID-19 vaccinations to keep their jobs.

Genesis Healthcare has 70,000 employees at nearly 400 nursing homes and senior communities. That’s a possible shift in an industry that has largely rejected compulsory measures for fear of triggering an employee exodus that could worsen already dangerous staffing shortages.

Despite the terrible toll taken by the disease at nursing homes, many of the nation’s 15,000 such institutions have rejected mandatory vaccinations for fear large numbers of workers will quit. Nearly a quarter of nursing homes are already short of nurses or nurse’s aides

But interviews with managers at 10 mostly smaller nursing home operations across the nation that made vaccinations mandatory found the threat of workers quitting en masse over the shots may be overblown.

Pennsylvania-based Genesis said volunteer vaccinations were appropriate earlier in the pandemic. However, the more infectious delta variant is spreading and only 65% of its staff has received shots. Genesis is giving employees until Aug. 23 to get their first shot.

More than 1,250 nursing home residents across the U.S. were infected with coronavirus in the week ending July 25, double the number from the week earlier, and 202 died, according to federal data.

More than 130,000 nursing home residents in the U.S. have died from COVID-19, making such institutions by far the deadliest place during the pandemic. About 80% of residents have been vaccinated, double the rate for staff, according to the government.

MADRID — Some of the summer hires on the Mediterranean party island of Ibiza are different this year.

They include private detectives posing as tourists, who tip off the police about illegal parties during the COVID-19 pandemic. Ibiza officials say the gumshoes are needed to infiltrate a growing number of prohibited parties.

The city council of Eivissa, also known to visitors as Ibiza Town and the island’s largest city, has hired a detective agency to recruit sleuths who look like tourists. Hundreds of thousands of tourists have headed to the island in recent months as travel restrictions ease.

But gatherings in large numbers are outlawed in Ibiza to fight the spread of the coronavirus. The island has Spain’s highest infection rate, with 904 per 100,000 people over 14 days on Wednesday, compared with a national average of 633.

PORTLAND, Maine — Maine’s public university system says it will require COVID-19 vaccines for all students who attend campus this fall.

The University of Maine System says it is deciding about enacting similar rules for faculty and staff. The system says in a statement the spread of the Ddelta variant played a key role in its decision to require the vaccines.

Maine students must have at least their first dose of vaccine by Aug. 20. Classes begin on Aug. 30. Every campus in the system is scheduled to hold vaccination clinics.

LONDON — The British government is accepting the advice of scientists to expand its coronavirus vaccination to ages 16 to 17.

Health Secretary Sajid Javid says in a tweet he’ll accept the recommendation from the Joint Committee on Vaccination and Immunization for healthy youths ages 16-17 to be offered a first dose of the Pfizer vaccine. He says he asked the National Health Service to prepare to vaccinate them “as soon as possible.”

Other countries in Europe, including France and Germany, are offering vaccines for children aged 12 and older.

BATON ROUGE, La. — As Louisiana hospitals struggle to keep up with the influx of COVID-19 patients, the state is asking federal officials for assistance getting enough health care workers to staff their beds.

On Wednesday, Baton Rouge General started receiving a staffing boost, with more than 100 medical workers arriving that it said will help both its hospital and other health care facilities in the area.

The additional staff includes doctors, registered nurses, respiratory therapists and certified nursing assistants. With their help, Baton Rouge General said it will be able to open up as many as 110 more hospital beds to care for COVID-19 patients.

REDMOND, Wash. — Microsoft says employees must be fully vaccinated to enter the company’s U.S. offices and other worksites, starting next month.

The tech giant told employees Tuesday it will require proof of vaccination for all employees, vendors, and any guests entering Microsoft buildings in the U.S. The company also says it will have a process to accommodate employees “who have a medical condition or other protected reason, such as religion, which prevent them from getting vaccinated.”

The company is also delaying its return to the office until Oct. 4.

Caregivers of people who are immunosuppressed or parents of children who are too young to receive a vaccine can work from home until January, the company says.

Microsoft’s new vaccine policy follows similar moves last week by other employers, including Google and Facebook, along with Disney and Walmart.

BEIJING — China’s worst coronavirus outbreak since the start of the pandemic a year and a half ago has escalated with dozens more cases around the country.

One city is being sealed off and local officials blamed for lax pandemic measures will be punished. Since the initial outbreak was tamed last year, China’s people lived nearly free of the virus, with extremely strict measures stamping out small flareups.

Now, the country is on high alert as a cluster of cases caused by the delta variant touched at least 17 provinces. After a hotspot grew from one city near a famed scenic area, officials issued an order that no one, whether tourist or resident, could leave.

GENEVA — The head of the World Health Organization is calling for a moratorium on administering booster shots of COVID-19 vaccines to help ensure that doses are available in countries where few people have received their first shots.

WHO Director-General Tedros Adhanom Ghebreyesus made the appeal on Wednesday mostly to wealthier countries that have far outpaced the developing world in numbers of vaccinations.

WHO officials say the science is unproven about whether giving booster shots to people who have already received two vaccine doses is effective in preventing the spread of the coronavirus. WHO has repeatedly called for rich countries to do more to help improve access to vaccines in the developing world.

Israel, France, Germany and many Middle Eastern countries have already started administering booster shots. Other nations, including the United States and Britain, are considering plans to do so in the wake of the emergence of the highly transmissible delta variant.

It’s moving toward the goal of 300,000 per day. With large deliveries of doses arriving and some vaccines assembled domestically, South Africa appears on track to inoculate about 35 million of its 60 million people by the end of the year. After starting with just a dozen vaccination sites, South Africa now has more than 3,000.

More than 7.7 million South Africans have received at least one dose, with more than 100,000 fully vaccinated, representing 1.6% of the population, according to official figures.

South Africa has shouldered the largest burden of COVID-19 in Africa, with more than 35% of all cases reported by the continent’s 54 countries. Its population is just 4.6% of the continent’s total.

Across Africa, less than 1.5% of the 1.3 billion people have been fully vaccinated, according to the Africa Centers for Disease Control and Prevention.

WASHINGTON — Former President Barack Obama has scaled down his 60th birthday bash due to the surge in the delta variant of the coronavirus.

A spokesperson says the party planned for this weekend at his home on Martha’s Vineyard off the Massachusetts coast is now limited to family and close friends. Obama, who turned 60 on Wednesday, had been criticized for planning a big celebration during a pandemic.

Published reports had said several hundred guests were expected. Obama’s defenders stressed that the party would be outdoors, guests were asked to provide a negative COVID-19 test and the event would follow public health guidelines.

The CDC website on Wednesday listed the rate of transmission in Dukes County, Massachusetts, which includes the island of Martha’s Vineyard, as “substantial.”

BERLIN — The German government says it will donate all future orders of the AstraZeneca vaccine to the United Nations-backed COVAX initiative.

German Health Minister Jens Spahn told media group RedaktionsNetzwerk Deutschland on Wednesday that 1.3 million doses of the vaccine will be delivered to COVAX, which can then distribute them to countries in need.

“It is in our vested interest to get the world vaccinated because this pandemic is only over when the virus is globally under control,” he said.

The media group reported Germany will give away future orders of the Johnson & Johnson vaccine. That means 1.7 million doses to European Union countries and other third-party countries.