Plan B for Iran explored by US, Israel 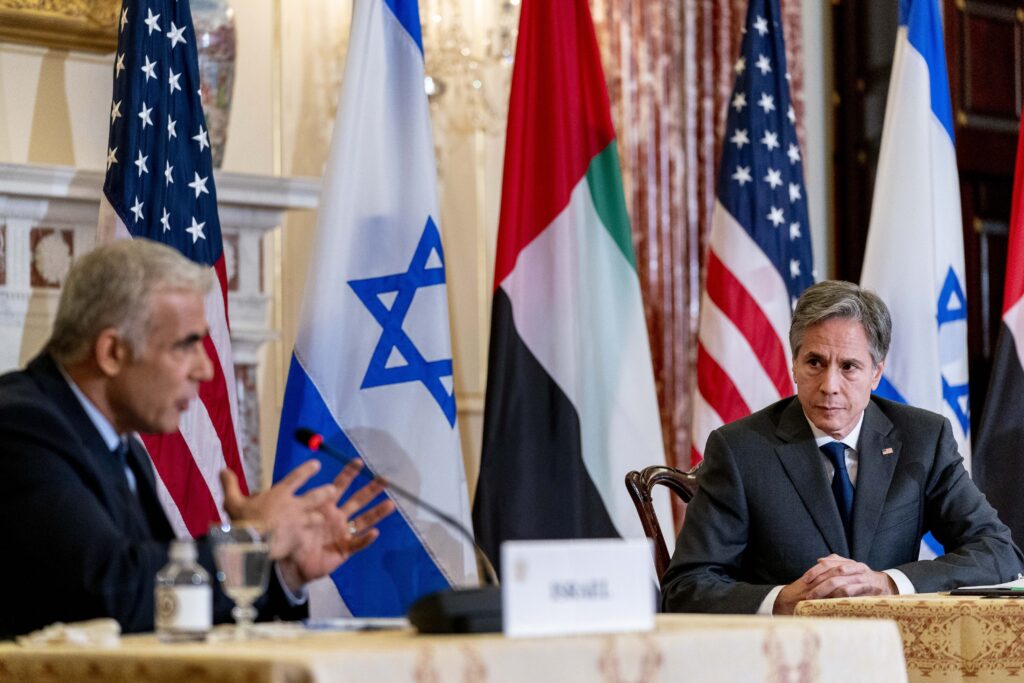 If Iran doesn’t return to the 2015 nuclear deal, the U.S. and Israel are considering an alternative plan. There are a wide range of non-diplomatic options that could be considered, ranging from stepped up sanctions to covert or military actions. The Associated Press has the story:

Reality strikes: Iran may not return to the 2015 nuclear deal

WASHINGTON (AP) — The United States and Israel said Wednesday they are exploring a “Plan B” for dealing with Iran if the Islamic Republic does not return in good faith to negotiations to salvage the languishing landmark 2015 nuclear deal.

Secretary of State Antony Blinken and Israeli Foreign Minister Yair Lapid said discussions between their two countries have begun on “other options” should Iran reject an offer to come back into compliance with the agreement if the U.S. rejoins it.

They did not elaborate on what those options might be, but there are a wide range of non-diplomatic options that could be considered, ranging from stepped up sanctions to covert or military actions. A Biden administration priority has been to revive the deal and abandoning that goal would be a blow to its foreign policy objectives.

The remarks were a rare acknowledgment by the U.S. that it is looking at what to do in the event diplomacy with Iran fails. Israel has never been a party to the nuclear deal, which former President Donald Trump withdrew from in 2018, and its former Prime Minister Benjamin Netanyahu was a vocal opponent of the agreement negotiated by the Obama administration.

Blinken and Lapid made the remarks at a joint news conference at the State Department with the foreign minister of the United Arab Emirates at which all three agreed to try to expand on the so-called “Abraham Accords,” the Trump-era agreements that normalized relations between Israel and the UAE and other Arab states.

Their comments came as Iran has hinted it’s ready to return to indirect negotiations with the U.S. in Vienna but has not committed to a date. Iran has also continued to blow through limits on it nuclear activities that had been constrained by the deal.

Blinken reiterated that the window for Iran to return to the agreement is closing but again declined to give a date at which it would be too late. “Time is running short,” he said. “We are prepared to turn to other options if Iran doesn’t change course, and these consultations with our allies and partners are part of it.”

“We will look at every option to to deal with the challenge posed by Iran,” Blinken said. “And we continue to believe that diplomacy is the most effective way to do that. But, it takes two to engage in diplomacy, and we have not seen from Iran a willingness to do that at this point.”

Lapid was more blunt, raising anew Israel’s warnings that it will act, with military force if necessary, to stop Iran from developing a nuclear weapon.

“There are moments when nations must use force to protect the world from evil,” he said. “If a terror regime is going to acquire a nuclear weapon we must act. We must make clear that the civilized world won’t allow it. If the Iranians don’t believe the world is serious about stopping them, they will race to the bomb.”

Those concerns appear to have struck a chord within the administration, which is loathe to appear less than supportive of Israel. Before Blinken and Lapid spoke, the administration’s special envoy for Iran negotiations, Robert Malley, made similar comments about exploring paths beyond diplomacy with Iran.

“We have to prepare for a world where Iran doesn’t have constraints on its nuclear program and we have to consider options for dealing with that,” Malley said at a virtual event hosted by the Carnegie Endowment for International Peace on Wednesday.

“We will be prepared to adjust to a different reality in which we have to deal with all options to address Iran’s nuclear program if it’s not prepared to come back,” he said. “There is every possibility that Iran will choose a different path, and we need to coordinate with Israel and other partners in the region.”

Malley said he would be traveling soon to Saudi Arabia, the UAE and Qatar to discuss those options.

In addition to Iran, Blinken, Lapid and Emirati Foreign Minister Abdullah Bin Zayed also discussed the way ahead in Israeli-Arab relations after the sealing of the Abraham Accords just over a year ago. Bin Zayed said he would soon be visiting Israel, reciprocating a visit Lapid made to Abu Dhabi in June.

“I look forward to seeing you in Israel soon,” he said to Lapid. Lapid responded: “In Israel, the door is open to you. My wife is looking forward to having you over for dinner.”

All three ministers expressed a desire to expand the Abraham Accords and announced the creation of two new working groups: one that will look at religious co-existence and another that will focus on water and energy.

Blinken reaffirmed the Biden administration’s commitment to a two-state solution being the best way to ensure the long-term survival of Israel as a democratic and Jewish nation as well as meeting Palestinian aspirations to have a country of their own.

But he demurred when asked for a timetable on the administration’s stated intention of re-opening the U.S. Consulate in Jerusalem. Israel is opposed to the re-opening of the consulate, arguing that Jerusalem is its capital, as recognized by the U.S., and that its permission is required to open any diplomatic mission there.

The consulate had long been the conduit for U.S. relations with the Palestinians until Trump closed it and merged its functions with the American Embassy, which he had moved to Jerusalem from Tel Aviv after breaking with long-standing U.S. policy and recognizing the holy city as Israel’s capital.

Blinken said only that “we’ll be moving forward with the process of opening a consulate as part of a deepening of those ties with the Palestinians.” But, he did not specifically mention that the consulate would be in Jerusalem.