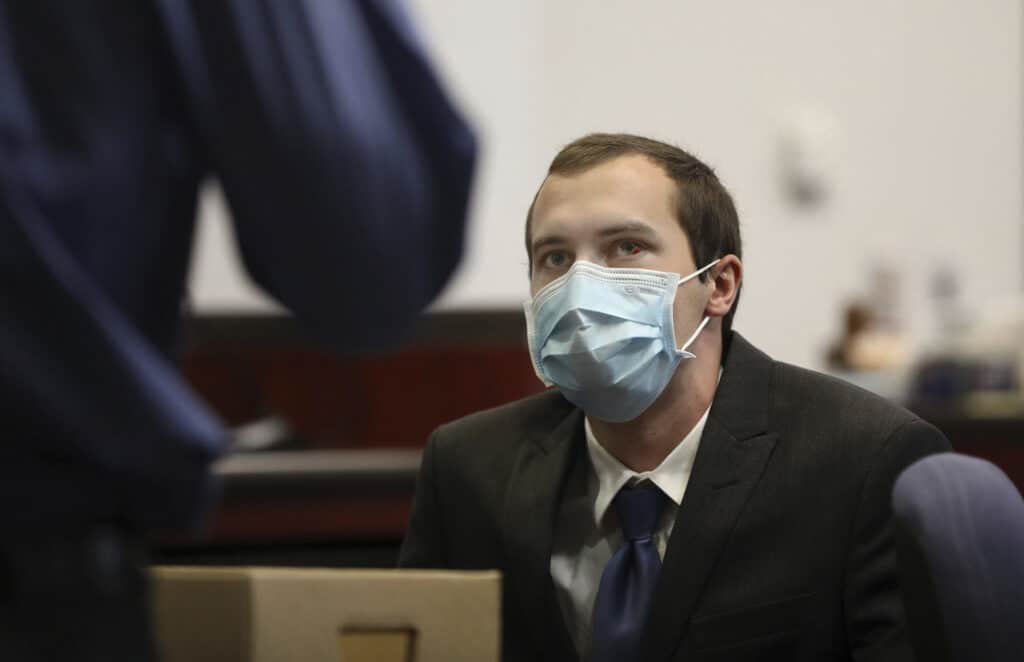 A U.S. Air Force airman was convicted for first-degree murder for killing Mennonite Sasha Krause of Farmington, New Mexico. In text messages exchanged with his brothers, Mark Gooch said he hated the Mennonites, of which he used to be one. The Associated Press has the story:

FLAGSTAFF, Ariz. (AP) — A jury in Arizona has convicted a U.S. Air Force airman in the disappearance and death of a Mennonite woman who had been living in New Mexico.

The jury reached its verdict Wednesday after deliberating for about five hours total. Jurors heard closing arguments in the case Friday.

Mark Gooch, 22, faces life in prison on the first-degree murder conviction. He also was found guilty of kidnapping Sasha Krause in January 2020 from the Farmington Mennonite Church where she was gathering material for Sunday school.

Krause’s body was found more than a month later, hundreds of miles away in a forest clearing outside Flagstaff, Arizona.

Half of the courtroom was filled at times with Krause’s parents and others who shared in the Mennonite faith, including the general manager of the publishing ministry where she worked in Farmington. Paul Kaufman said Wednesday his heart goes out to both Krause’s and Gooch’s parents, and the community doesn’t want to be vindictive of Gooch.

“We desire his complete repentance, that he would turn from darkness to light,” Kaufman said.

Coconino County Attorney William Ring did not immediately respond to a request for comment Wednesday.

Jurors heard 10 days of testimony from those who knew Krause, investigated her disappearance and tried to track down who was responsible. They heard from ballistics experts who disagreed on whether the bullet taken from her skull was fired from a .22-rifle caliber that Gooch owned. They heard from Gooch’s father, Jim, but they did not hear from the defendant himself.

Gooch had no expression during the trial or when the verdict was announced. As he left the courtroom, he looked toward two family members who sat behind him in court. They declined to comment.

Sentencing has been set for Nov. 24. Coconino County Superior Court Judge Cathleen Brown Nichols separately convicted Gooch of a misdemeanor charge of theft, related to clothing that was missing from Krause’s body.

Gooch’s attorney, Bruce Griffen, tried to raise reasonable doubt among the jury by pointing to a lack of forensic evidence and testimony about another car being seen in the Mennonite community the day Krause went missing. He said Gooch was peaceful and volunteered information to a sheriff’s detective who interviewed him at Luke Air Force Base in metropolitan Phoenix where he was stationed.

Nothing indicated Krause and Gooch knew each other. Both grew up in large families with parents who joined the Mennonite church when they were young. Krause continued on that path but Gooch did not, instead rejecting the faith and leaving Wisconsin for the military.

Gooch’s father, Jim Gooch, testified during the trial that his son did not have a converted heart, words that prosecutor Ammon Barker drew on during his closing arguments.

“What the scripture says is you turn from darkness to light,” Jim Gooch said. “What it says is you’ve decided to follow the lord with your entire heart and with the tenets of the scripture would call for.”

Krause, 27, taught school for six years at Grandview Gospel Fellowship in Grandview, Texas, before moving to Farmington. She worked in the publishing ministry there for less than two years before she died. She was known for her poetry, her knowledge of Spanish and French, her skills in card games and ping pong, and for her quiet work ethic.

No one saw her being taken from the community or killed. When a camper found her body near Sunset Crater Volcano National Monument, her wrists were bound with duct tape, she had suffered blunt force trauma and had a gunshot wound in the back of her head.

Authorities used cellphone, financial records and surveillance video to tie Gooch to the crimes, they said. Barker said Gooch was driven by a resentment for Mennonites, partly displayed through text messages exchanges with his brothers.

Authorities found inconsistencies in Gooch’s story when he talked to a sheriff’s detective shortly before he was arrested in April 2020. They said Gooch’s cellphone was the only device that communicated with the same cell sites as Krause’s phone before her signal dropped off west of Farmington.

The San Juan County Sheriff’s Office in New Mexico, which investigated her disappearance, said it will pursue a separate kidnapping charge against Gooch.

“We are delighted to hear that Sasha got some justice today,” Sheriff Shane Ferrari said in a statement.

Previous Article
Biden opens LA port 24/7 to stem inflation
Next Article
Plan B for Iran explored by US, Israel