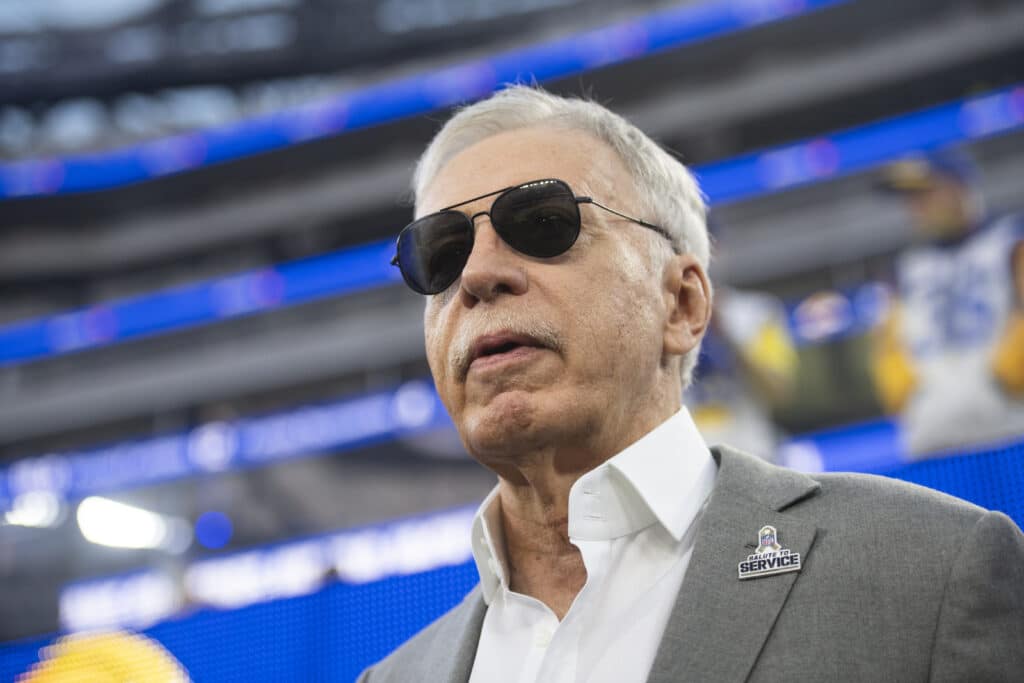 After lengthy litigation, Los Angeles Rams owner Stan Kroenke and the NFL will pay $790 to the City of St. Louis in a settlement for deserting St. Louis for Los Angeles. St. Louis was upset over all the tax revenues and benefits it lost. The Associated Press has the story:

Feud over Rams moving from St. Louis to Los Angeles finally over

ST. LOUIS (AP) — The NFL and Rams owner Stan Kroenke will pay $790 million to settle a lawsuit filed by St. Louis interests over the team’s relocation to Los Angeles, a joint statement from St. Louis city and county said Wednesday.

“This historic agreement closes a long chapter for our region, securing hundreds of millions of dollars for our communities while avoiding the uncertainty of the trial and appellate process,” read a statement from St. Louis Mayor Tishaura Jones and St. Louis County Executive Sam Page.

St. Louis-area officials haven’t determined yet how the settlement funds will be used, the statement said.

An NFL spokesman, in a brief statement, said the league and the St. Louis interests “have been able to fully resolve the dispute.”

The settlement, reached in mediation, ends a 4 1/2-year-old lawsuit filed in the wake of the Rams’ 2016 departure. Kroenke and the NFL had failed in bids to have the lawsuit dismissed or at least moved out of St. Louis, and courts were sympathetic to the St. Louis side’s effort to disclose financial information of team owners — rulings that hastened the push for a settlement.

The case had been scheduled to go to trial Jan. 10. The lawsuit sought more than $1 billion. It claimed the team’s move cost the St. Louis region millions of dollars in amusement, ticket and earnings tax revenue.

Then-owner Georgia Frontiere moved the Rams from Los Angeles in 1995 to her hometown of St. Louis, where they stayed for 21 seasons before Kroenke moved them back.

Kroenke, a Missouri real estate developer who is married to an heir of the Walmart fortune, became a minority owner when the team first came to St. Louis. Frontiere died in 2008 and left the team to her children, who sold the Rams to Kroenke in 2010.

It wasn’t long after that that the Rams began pushing for hundreds of millions of dollars in improvements to the downtown domed stadium built with taxpayer money in the early 1990s to attract an NFL team.

St. Louis interests initially proposed a more modest upgrade, then eventually proposed a new $1 billion stadium along the Mississippi River that would be funded jointly by taxpayers, the team and the NFL. The league and the team balked.

Instead, Kroenke purchased land in Inglewood, California. SoFi Stadium opened in September 2020 and is now home to both the Rams and the Los Angeles Chargers, who moved from San Diego in 2017.

Beyond losing an NFL team, St. Louis residents were incensed by Kroenke’s 29-page application to relocate ahead of the January 2016 owners meeting where the move was approved. The document was critical of St. Louis for its decline in population, questioned the region’s economic future and called into question whether it could support baseball’s Cardinals and hockey’s Blues as well as an NFL franchise.

The 2017 lawsuit filed on behalf of St. Louis, St. Louis County and the St. Louis Regional Convention and Sports Complex Authority said Kroenke, other team officials and the league knew as early as 2013 that the Rams planned to relocate but lied in denying it. The lawsuit said the league ignored its own relocation guidelines in allowing the move.

The NFL, Rams and Kroenke said the guidelines aren’t iron-clad and the league had the right to approve a move that was clearly in the interest of the NFL and the owners of its 32 teams.

Peter Joy, a professor at the Washington University School of Law in St. Louis, said the case should serve as a lesson for owners and the league to keep in mind if other team relocations are considered.

“Play by the rules,” Joy said. “Keep to the contract. Don’t be deceptive.”

The settlement comes after a string of in-court losses for Kroenke and the NFL, America’s most popular and lucrative sports league.

St. Louis Circuit Judge Christopher McGraugh ruled in July that there was sufficient evidence that Kroenke and others engaged in fraud, so he ordered NFL owners to release financial records. The purpose was to allow a jury to consider punitive damages if Kroenke and the NFL lost the lawsuit.

Lawyers for NFL officials called the request for records “invasive,” but the Missouri Supreme Court in September upheld the lower court order.

The NFL and Kroenke had also sought to move the trial out of St. Louis, citing “undue influence” over prospective jurors. But McGraugh denied the request in August, a decision later backed up by a Missouri appeals court.

Kroenke and the NFL also sought unsuccessfully to have the case heard in arbitration rather than in court.