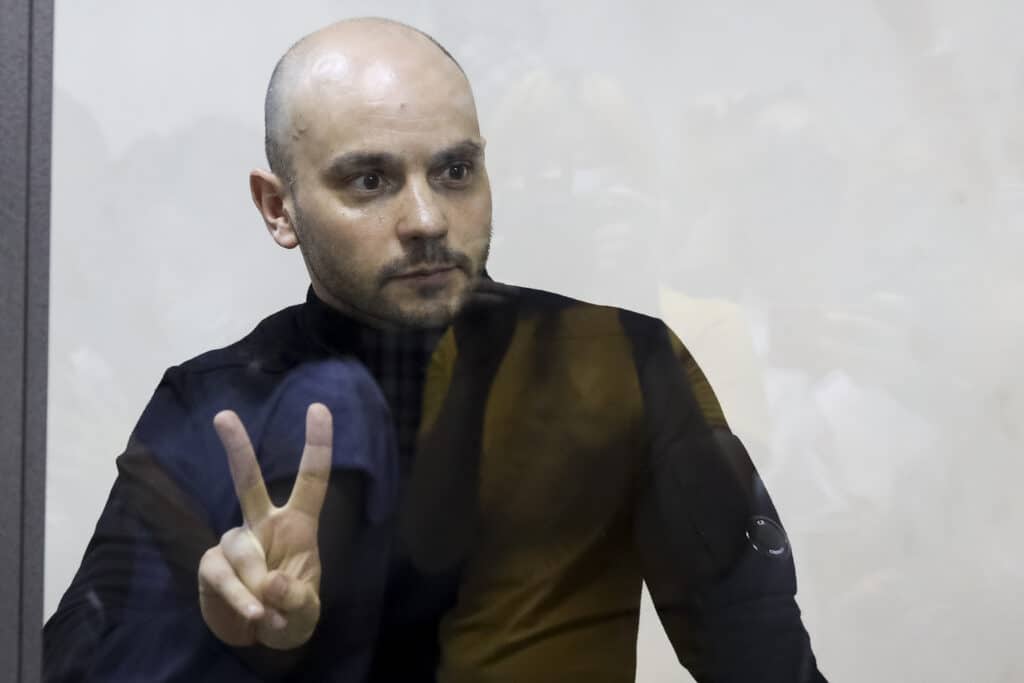 A Russian court has sent Andrei Pivovarov, the head of the Open Russia movement that has just disbanded itself, to jail for two months pending an investigation. The court is also is also going to consider locking up Dmitry Gudkov, a Russian politician. The Associated Press has the story:

MOSCOW (AP) — A Russian court on Wednesday sent a prominent opposition activist to jail pending a probe, as authorities continue to crack down on dissent ahead of September’s parliamentary election.

In the southern city of Krasnodar, a court ordered Andrei Pivovarov, the head of the Open Russia movement that has just disbanded itself, to be held for two months pending an investigation, rejecting the defense’s appeal against his arrest.

Last week, Open Russia’s leaders dissolved the group to protect its members from prosecution after Russian authorities designated it as an “undesirable” organization along with more than 30 others, using a 2015 law that made membership in such organizations a criminal offense.

Pivovarov rejected the charges and pointed out during the court hearing that the criminal probe against him was opened two days after Open Russia shut down.

He was pulled off a Warsaw-bound plane at St. Petersburg’s airport just before takeoff late Monday and taken to Krasnodar, where authorities accused him of supporting a local election candidate last year on behalf of an “undesirable” organization.

On Wednesday, a court in Moscow is also set to consider investigators’ request to lock up Dmitry Gudkov, a former Russian lawmaker who has aspired to run again for a parliament seat. Gudkov was detained Tuesday on financial charges that he and his supporters allege were trumped up.

President Vladimir Putin’s spokesman, Dmitry Peskov, rejected suggestions of political motives for the investigations of Gudkov and Pivovarov, telling reporters that “the accusations filed by law enforcement agencies have no relation to politics.”

Open Russia was financed by Russian tycoon Mikhail Khodorkovsky, who moved to London after spending 10 years in prison in Russia on charges widely seen as political revenge for challenging Putin’s rule.

Speaking to The Associated Press in a Zoom interview on Tuesday, Khodorkovsky said that the recent crackdown on dissent reflects the authorities’ concern about the waning popularity of the main Kremlin-directed party, United Russia.

“The authorities don’t feel that confident about the results they can get in September,” Khodorkovsky told the AP. “That’s why the Kremlin is trying to steamroll all potential political opponents.”

Putin spoke to United Russia candidates in September’s vote via a video call Wednesday, hailing the party’s role in helping the population and businesses amid the economic fallout from the coronavirus pandemic.

Putin’s most determined political foe, Alexei Navalny, was arrested in January upon his return from Germany, where he had spent five months recuperating from a nerve agent poisoning that he blames on the Kremlin — accusations that Russian officials dismiss. He was given a 2 1/2-year prison sentence in February for violating terms of a suspended sentence stemming from a 2014 embezzlement conviction that he denounced as politically motivated.

A court in the town of Petushki, in the Vladimir region east of Moscow, on Wednesday rejected Navalny’s appeal asking to halt the hourly night-time checks he has been subjected to in his penal colony.

Speaking to the court in a video link from prison, Navalny charged that the checks “effectively amount to torture” and argued that he has done nothing that would warrant the authorities’ decision to designate him as a flight risk that has resulted in checks.

He went on a 24-day hunger strike in prison to protest the lack of medical treatment for severe back pain and numbness in his legs, ending it last month after getting the medical attention he demanded.

In remarks given to his lawyers and posted on his Instagram account Wednesday, Navalny denounced the criminal charges against Pivovarov and Gudkov as “a sham and a crime.”

“This disgusting deceitful government is also quite cowardly, and it’s going to gobble people up one by one to scare all others,” he said, urging Russians not to be afraid of repression. “They live by our fear, don’t feed them,” he added.

With Navalny in prison, prosecutors have asked a Moscow court to designate his Foundation for Fighting Corruption and his network of regional offices as extremist groups. At the same time, a bill approved by the lower house of the Russian parliament bars members, donors and supporters of extremist groups from seeking public office — a measure that would keep Navalny’s associates from running for parliament in September.

Khodorkovsky argued that the Sept. 19 parliamentary election is important for Putin to cement his rule ahead of the 2024 Russian presidential election. The 68-year-old Putin, who has been in power for more than two decades, pushed through constitutional changes last year that would potentially allow him to hold onto power until 2036.

Harriet Morris in Moscow contributed to this report.