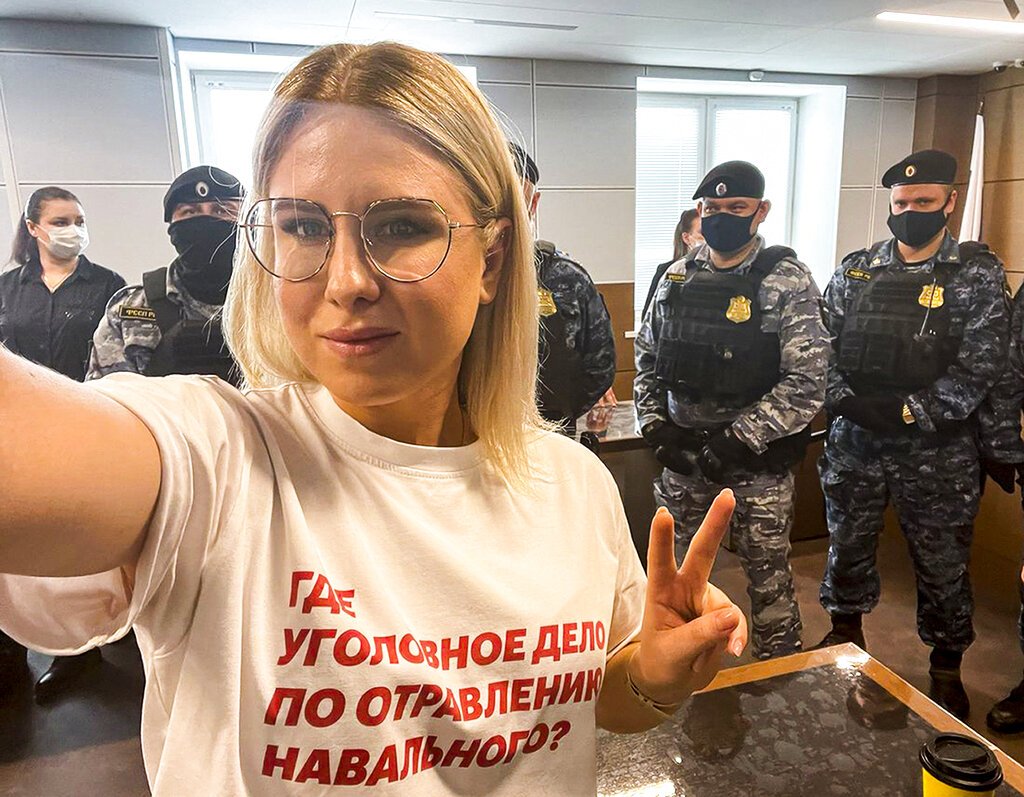 Lyubov Sobol, a top associate of imprisoned opposition leader Alexei Navalny, has been prosecuted in Russia for trespassing. She showed up at the home of the man who allegedly poisoned Navalny, Konstantin Kudryavtsev, to confront him. A Russian court sentenced her to a suspended sentence of one year community service. The Associated Press has the story:

MOSCOW (AP) — A top associate of Russia’s imprisoned opposition leader Alexei Navalny was convicted of trespassing Thursday and handed a suspended sentence of one year community service after she tried to doorstep an alleged security operative believed to be involved in Navalny’s poisoning with a Soviet-era nerve agent.

A court in Moscow found Lyubov Sobol, a politician and a key figure in Navalny’s Anti-Corruption Foundation, guilty of forcing her way into the apartment of a relative of the alleged operative whom Navalny had previously duped into revealing details of his supposed poisoning.

Sobol condemned the verdict as “shame and disgrace” and vowed to appeal.

“In the meantime, a (criminal) case into the attempt upon Navalny’s life hasn’t been even opened,” she said in a tweet.

Navalny, Russian President Vladimir Putin’s fiercest critic, fell sick during an Aug. 20 flight in Russia and was flown to Berlin while still in a coma for treatment two days later. Labs in Germany, France and Sweden, and tests by the Organization for the Prohibition of Chemical Weapons, established that he was exposed to a Soviet-era Novichok nerve agent.

The 44-year-old politician has blamed the poisoning on the Kremlin, accusations Russian officials have rejected.

In December, while still convalescing in Germany, Navalny released a recording of a phone call he said he made to a man he identified as Konstantin Kudryavtsev and described as an alleged member of a group of officers of the Federal Security Service, or FSB, who purportedly poisoned him with Novichok and then tried to cover it up.

In the call, Navalny introduced himself as a security official and beguiled his interlocutor into sharing details of the alleged poisoning operation and acknowledging that he was involved in the “processing” of Navalny’s underwear so “there wouldn’t be any traces” of poison.

After the recording was released, Sobol showed up at the residential building in Moscow where Kudryavtsev supposedly lived.

Sobol addressed the court on Wednesday and said the case against her was “completely deceitful” and designed to prevent her from asking Kudryavtsev questions.

Sobol is currently awaiting another trial — she and other top associates of Navalny were accused of violating coronavirus regulations during protests that followed Navalny’s jailing in January. Navalny was arrested upon returning from Germany, triggering mass nationwide protests that posed a major challenge to the Kremlin.

The opposition leader is currently serving a 2 1/2-year prison sentence for a 2014 embezzlement conviction he said was fabricated and the European Сourt of Human Rights declared “arbitrary and manifestly unreasonable.” For more then two weeks, Navalny has been on a hunger strike over prison officials’ refusal to allow a visit from his doctor after he developed severe back and leg pain.