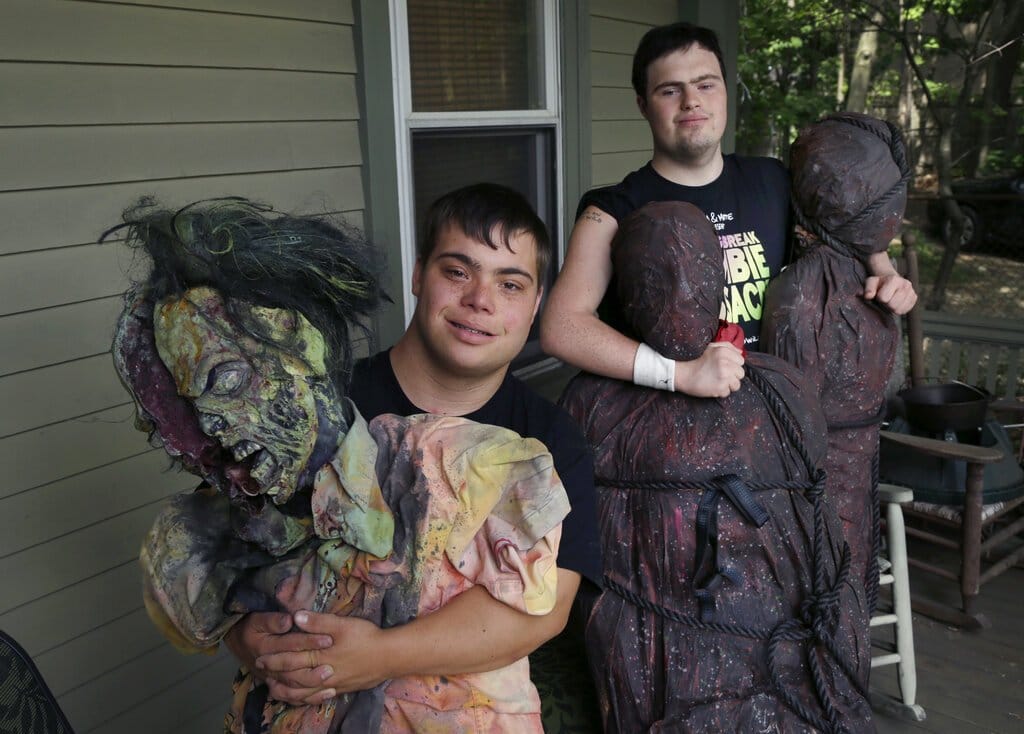 AP- Two best friends with Down syndrome who caused a sensation four years ago when they created their own gory zombie movie are back, this time in a documentary championed by a Hollywood luminary.

The original movie earned national attention and an appearance on Conan O’Brien’s show for the two Rhode Island natives.

Suchmann and Zufelt, both 25, loved the attention then — and they’re loving it again now.

But talk to anyone who knows them, and it’s not overcoming a disability that makes their story remarkable — it’s the sheer determination they showed in getting the movie made.

“They’re a whirlwind of energy and happiness,” Peter Farrelly, a fellow Rhode Islander and executive producer of the documentary, said in a telephone interview from Los Angeles. “These guys are really sharp and they knew what they wanted. Our job was to help them but not get in their way.”

Farrelly, producer of the Oscar-winning film “Green Book,” and his brother, Bobby, have for years cast actors with disabilities in their movies and pushed for other Hollywood powerbrokers to do the same. Their 2005 movie “The Ringer,” about someone pretending to have a disability and competing in the Special Olympics, had about 150 extras with Down syndrome.

The Farrellys were named the 2020 recipients of the Morton E. Ruderman Award in Inclusion, given by the Boston-based Ruderman Family Foundation for demonstrating outstanding accomplishment in the field of disability inclusion.

The documentary doesn’t even mention Down syndrome, said Sam’s brother, Jesse Suchmann, who along with friend Robert Carnevale codirected the original movie, enlisting friends in the industry to help out with their time, expertise and equipment.

The hope is that the film inspires others to put neurodivergent minds in charge of the creative process, like Sam and Mattie were, instead of simply writing them into a script in the name of inclusion, Jesse Suchmann said.

Suchmann, of Providence, and Zufelt, of Bristol, have been best friends since they met participating in the Special Olympics during elementary school. They found they had a mutual love of horror movies.

“We’ve always been into horror movie and zombie movies,” Zufelt said. ”‘Saw’ and ‘Purge’ were always my favorites.”

They thought they could put something together as good as what they saw coming out of Hollywood. The result was “Spring Break Zombie Massacre,” a 45-minute film in which they play brothers who save the world from a zombie apocalypse spawned by the devil himself.

Farrelly, who has become a mentor and friend to the pair, said he’s watched it maybe 10 times — and it never fails to make him smile.

“This is about what anybody has to do in life to get a movie made, or do anything in life that is hard to do,” he said. “People shouldn’t see their movie because two kids with Down syndrome made it. They should see it because it’s a damn good movie.”

Zufelt and Suchmann aren’t done either: They’re planning a sequel.

Suchmann promises it will be “epic.”