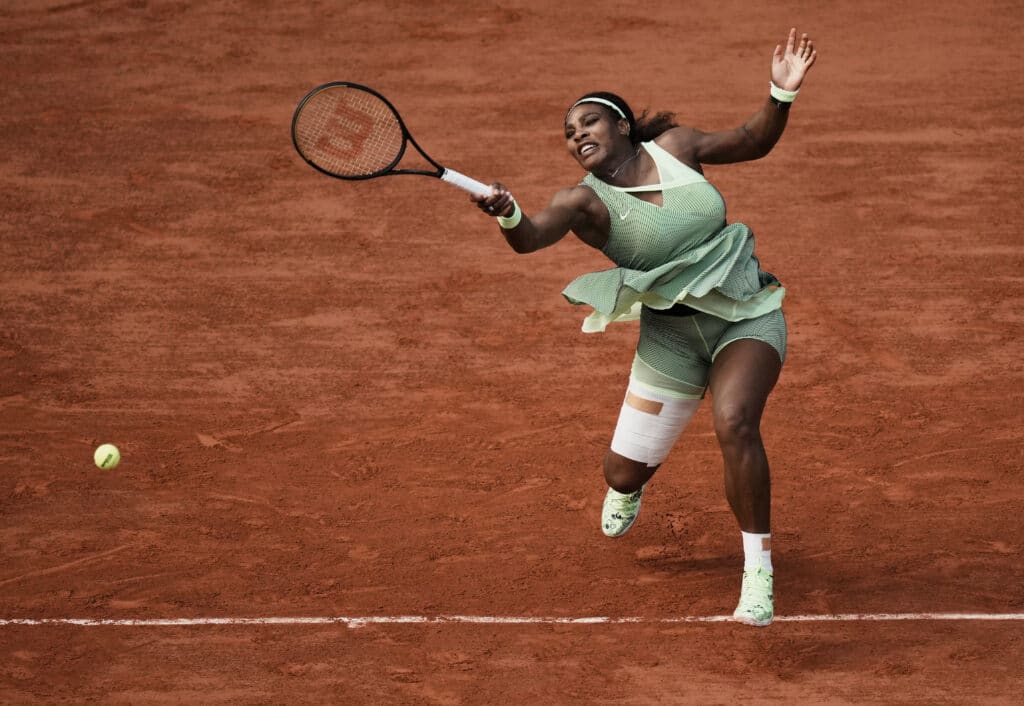 PARIS (AP) — The Latest on the French Open (all times local):

Serena Williams has lost the opening set of her fourth-round match at the French Open.

Williams dropped the set by a 6-3 score against 21st-seeded Elena Rybakina.

This is the 64th time Williams has been this far at a Grand Slam tournament.

Rybakina never has played in the fourth round of a major before.

Daniil Medvedev’s remarkable turnaround at the French Open has propelled him to the quarterfinals.

The Russian beat Cristian Garin 6-2, 6-1, 7-5 Sunday. Medvedev is seeded No. 2, but few envisioned his current run of success because he arrived in Paris with a career record of 0-4 at Roland Garros.

Medvedev received treatment on his right elbow during the third set against Garin but finished strong, hitting a succession of winners to take the final two games.

Iga Swiatek and Bethanie Mattek-Sands have staged an improbable comeback to eliminate the top-seeded doubles team at the French Open.

Swiatek, the defending singles champion, and her partner overcame seven match points and a 5-1 deficit in the final set. They beat Hsieh Su-wei and Elise Mertens 5-7, 6-4, 7-5 in a wild third-round match that took more than three hours.

When it finally ended, an excited Swiatek and Mattek-Sands jumped into a hug.

Swiatek will return to her pursuit of another singles title Monday when she faces Marta Kostyuk.

Roger Federer has withdrawn from the French Open to give himself a chance to recover after a long third-round match.

Federer said in a statement that it is important for him to listen to his body as he returns to action after two operations on his right knee.

The 39-year-old Federer was supposed to play against Matteo Berrettini in the fourth round on Monday.

Instead, Federer will turn his focus to the grass-court portion of the season. Wimbledon begins June 28. He has won a men’s-record eight titles there.

Anastasia Pavlyuchenkova has reached the quarterfinals for the first time in 10 years at Roland Garros.

Pavlyuchenkova lost her only quarterfinal here in 2011.

She has also reached the quarters at the Australian Open and Wimbledon but has never reached the semifinals at any major.

To do so here, the 29-year-old Russian might have to beat 23-time Grand Slam champion Serena Williams.

The seventh-seeded American plays No. 21 Elena Rybakina in the fourth round and the winner of that match takes on Pavlyuchenkova.

Tamara Zidansek has become the first Slovenian woman to reach the quarterfinals of a major tournament.

She did so by winning 7-6 (4), 6-1 against Romanian Sorana Cirstea, who was also unseeded here.

Zidansek dropped to her knees and held her head in her hands after winning on her first match point with a forehand winner.

Prior to the tournament the 23-year-old Zidansek had never even beaten a top 10-ranked player.

Her previous best at a major was the second round at the Australian Open and Wimbledon. She’d twice lost in the first round at Roland Garros.

The previous best by a Slovenian woman was when Katarina Srebotnik reached the fourth round at the French Open and the U.S. Open.

Serena Williams continues her quest for a record-tying 24th Grand Slam title, and the 39-year-old American is playing in the fourth round at a major for the 64th time.

The seventh-seeded Williams takes on 21st-seeded Elena Rybakina. She has never been in the fourth round before at a major and faces three-time French Open winner Williams for the first time.

In men’s play, No. 2 Daniil Medvedev continues his new-found fondness for clay.

The two-time losing Grand Slam finalist was 0-4 at Roland Garros before this tournament. The big-hitting Russian plays No. 22 Cristian Garin for a place in the quarterfinals.

No. 5 Stefanos Tsitsipas and No. 6 Alexander Zverev are also in action. Read more sports news