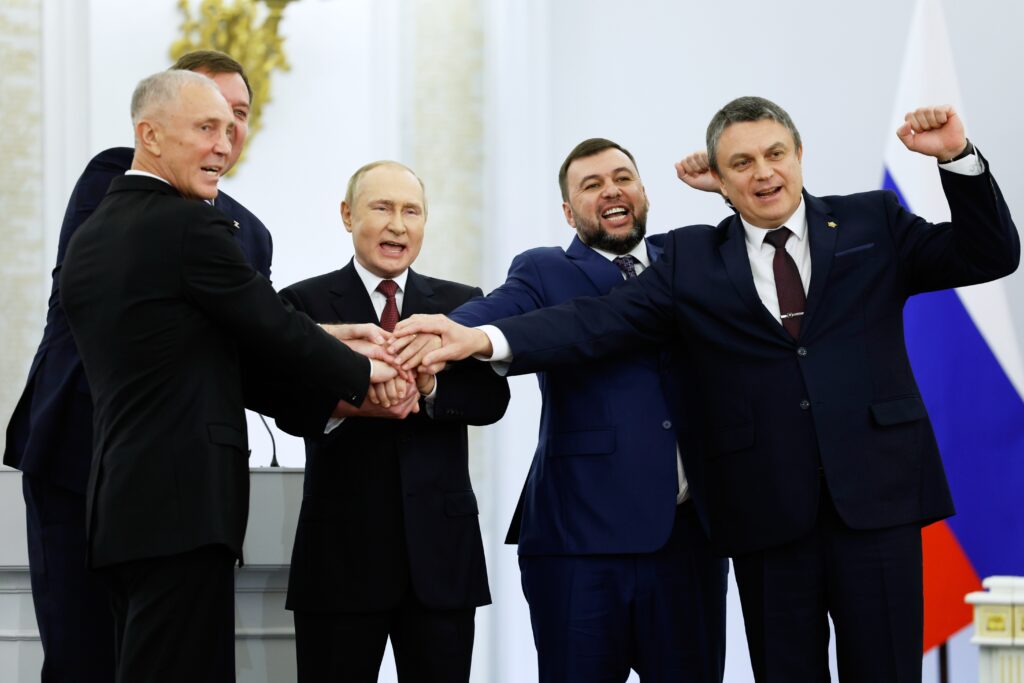 In response to a series of fraudulent referendums in Russian-controlled southern and eastern Ukraine, Vladimir Putin, in a further escalation and disregard for international law and the UN Charter, hosted a ceremony at the Kremlin on Friday and signed a treaty incorporating Donetsk, Luhansk, Kherson, and Zaporizhzhia into the Russian Federation. The decision effectively appropriated 15% of all of Ukraine’s land area, or around 35,000 square miles.

The use of force and keeping the process under duress makes the term “referenda” misleading, and the predictable outcomes are further evidence of this. At present, Russia has a long history of spoofing democracy, dating back to the Soviet Union era when it staged elections to allow Lithuania, Latvia, and Estonia to join the Soviet Union in 1940 and continuing through the Crimea referendum in 2014 (97% of voters supposedly chose to join the Russian Federation, when the real result was closer to 15%). In all of the time period, the voting process has never been able to win over the public.

President Biden refused to acknowledge the results of the referendum, calling it a “sham,” echoing the sentiments of many other nations who have spoken out against the decision. Russia’s closest traditional allies, including Serbia and Kazakhstan, have stated they do not recognize it, while the United States and the Group of Seven are ready to put further sanctions on Russia for the annexation of Ukrainian lands. UN Secretary General Antonio Guterres has stated that any annexation of a state’s territory by another state resulting from the threat or use of force is a violation of the principles of the UN Charter and international law, and that “The Russian Federation, as one of the five permanent members of the Security Council, shares a particular responsibility to respect the Charter.”

Putin’s goal of weakening Western backing for Ukraine, the focus of his annexation, is perhaps the most important motivation for his continued acquisition of Ukrainian land. Germany and France, along with the rest of the Western world, are afraid of an escalation that may lead Putin to make good on his nuclear threats or further disrupt energy supply and markets. Especially considering the continued political, financial, and, most significantly, military backing that the United States and the United Kingdom offer to Kyiv. The fact that Moscow now considers these territories part of Russia may be enough to make some governments hesitant to back any military operation that strays into those areas, even if the West does not acknowledge the legitimacy of Moscow’s unilateral annexation. Putin must realize that this significantly “raises the stakes.” Some countries may think twice about backing a military campaign that crosses into these areas now that the Kremlin recognizes them as Russian territory. We may say that it is an attempt to evaluate the actual might of the Western alliance.

The United States and Albania have proposed a resolution to the United Nations Security Council which, resulted in 10 voted yes, and 4 abstained (China, Brazil India and Gabon) while Russia vetoed, the UN General Assembly will further discuss and vote on the resolution since it adheres to UN Charter values. It’ll be interesting to see whether countries stick behind Russia after its aggressive actions.

The effect of Russia’s invasion of Ukraine has far-reaching consequences and results, which are not only being felt in Europe, which is projected to have a difficult winter as a result of anticipated energy shortages, this have led Germany’s Chancellor Olaf Sholz to travel to the Gulf to secure extra shipment of natural gas from UAE and Qatar, but one needs to also consider a great number of countries in Africa, the Middle East, and other parts of the world. The disruptions to the global supply chains have not had an effect on the western world alone, but rather on the developing world, which is becoming a global concern due to the food shortage and the impact of the shortage of fertilizers, which is having an effect on next year’s crops. It is time for other countries to step up and fill the gap, such as China and Morocco, which are among the world’s biggest producers; however, it is unclear whether this solution will be sustainable or not. It is anticipated that this will have an effect on the ultimate total of votes taken in the General Assembly.

Previous Article
Trump flirts QAnon Conspiracy at his last rally
Next Article
Apple’s ‘Emancipation,’ with Will Smith, in Dec.