Ships fail to get pollution waiver for bad weather 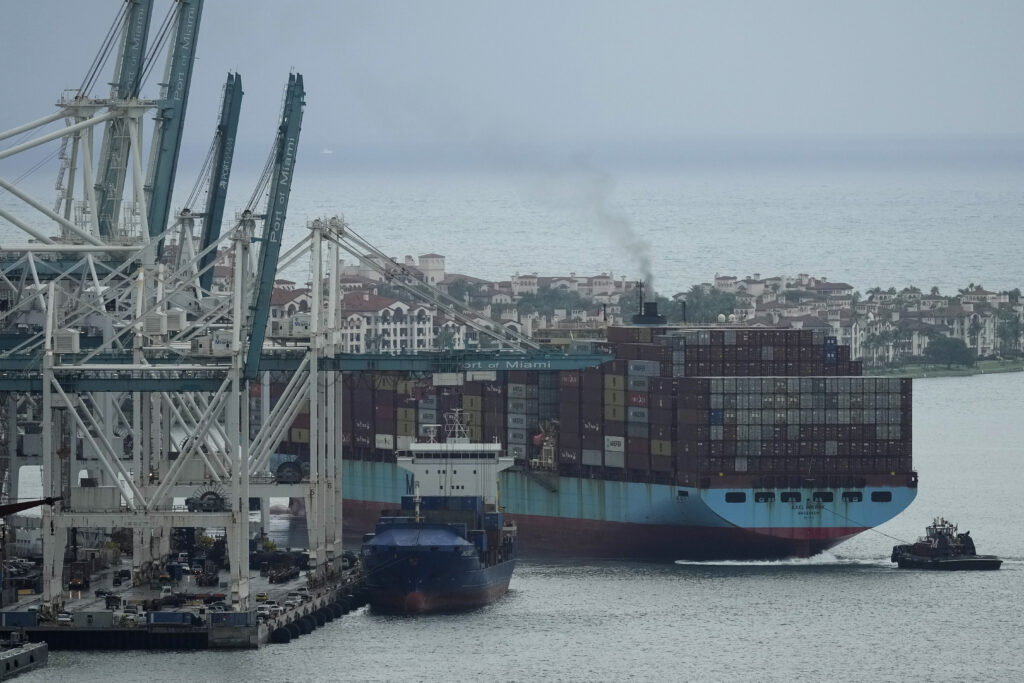 International regulations have been cracking down on CO2 released from ships, causing the owners to request an exemption during bad weather. However their efforts failed, and they will be forced to install cleaner technologies. The Associated Press has the story:

In 2023, all big ships will be rated from A to E by how much CO2 flows from their stacks

(AP) The world’s ocean freight shipping companies recently called on international maritime authorities to exclude pollution that their vessels spew in bad weather from new regulations, a condition that would apply almost a third of the time in the Atlantic. But the effort failed Friday.

Under international laws due to come into force in 2023, all big vessels will be rated from A to E by how much carbon dioxide flows from their stacks for every mile traveled and ton carried. The idea is to incentivize owners to install cleaner technologies. Although the proposed rules are currently toothless, nation states might bring in penalties for high-polluting ships in the future.

In April, four trade groups, including the World Shipping Council, complained that the new rules would penalize ships that have to sail in rough conditions. This burns more fuel and produces more carbon dioxide, meaning ships in windy seas would get a worse carbon efficiency rating.

So the trade groups proposed to the International Maritime Organization in written submissions that periods of eight hours or more undertaken in bad weather be struck from the scoring entirely. They defined bad weather as wind speeds of 28 knots or waves four meters (13.1 feet) high.

“It would pretend that ships hardly ever sail in stormy weather and only calculate the carbon intensity of the ship under the most favorable conditions,” said Bryan Comer, who heads up the marine program at the International Council of Clean Transportation.

The International Maritime Organization, made up of member countries, has now rejected that idea.

Going slow is one of the best ways to reduce emissions. If they had won the exemption, ships could have gone as fast as they wanted in bad weather, Comer said, burning more fuel than usual without it showing up in their ratings. This might enable them to hit tougher deadlines and win contracts.

“There is actually an incentive if this had gone forward to sail in adverse weather,” said Comer.

According to the World Shipping Council, waves exceed four meters in the North Atlantic more than 30% of the time.

The World Shipping Council argued that factors like extreme weather “distort the picture and make the numbers less effective at driving the change we want.”

The trade group conceded it was “logical at first glance” that the proposal might incentive ships to sail into heavy weather, but said the high cost of fuel made this very unlikely. It pointed out sailing in rough seas can use 30% more fuel than in calmer weather, thus saddling ships with a worse rating. Ships that routinely traverse calm waters such as those off Nigeria would more easily win top grades while those that have to cross the Atlantic would automatically look worse.

“Failing to address these inequities… unfairly labels certain ships as ‘inferior’ because of the routes they serve,” the World Shipping Council said.

James Gamble, a program director at Pacific Environment, which works to protect the Pacific Ocean and coastal communities, has also been following the negotiations.

The proposed regulations should be left as they are to achieve 2030 emissions targets, he said. While trade groups can give good advice on cutting emissions, their primary focus is on making members money, he said.

What was really at issue, Gamble said, is that “ships that are low-rated will be at a market disadvantage with customers who want to transport their goods with as little emissions as possible.”

Both have made stringent promises to cut greenhouse gases. MSC has pledged to hit net zero by 2050, while Maersk says it will do so ten years earlier.

Responding to a request for comment, the trade group took a somewhat different position than in its filings. An average rate of fuel use should be applied during rough seas, rather than subtracting these portions of the journey completely, the company said by email.

When The Associated Press pointed out the effect would be the same, because carbon efficiency ratings are a ratio and not a measure of total emissions, the company said “recent internal discussions” had led it to reconsider this suggestion.

It concluded, “I doubt that we will advance the idea” which “may offer little mathematical difference in the calculation.”

For the climate, it’s actual emissions that matter.