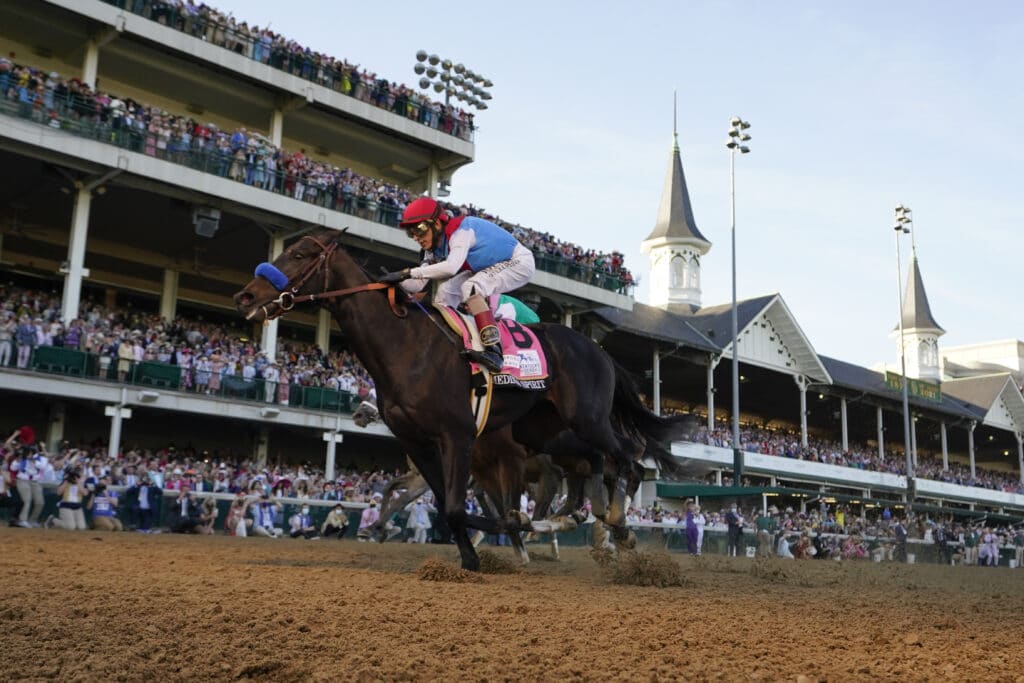 A spit-sample test from Kentucky Derby winner Medina Spirit came back positive for the steroid betamethasone. However, its presence may be due to an ointment used to treat a skin infection. The Associated Press has the story:

Kentucky Derby winner tests positive for steroid, but it may have been for medicinal use

LOUISVILLE, Ky. (AP) — Bob Baffert’s lawyer said Wednesday that a split-sample test of Kentucky Derby winner Medina Spirit came back positive for the presence of the steroid betamethasone, which could lead to the horse’s disqualification and discipline for the Hall of Fame trainer.

Attorney Craig Robertson said the second test showed 25 picograms of the steroid, after 21 picograms were found initially. Even a trace amount of betamethasone — a picogram is a trillionth of one gram — is prohibited on race day in Kentucky, Maryland and New York, which are home to the sport’s Triple Crown races, and considered a violation.

Robertson said additional testing is being conducted to try to trace the source of the drug to an ointment to treat a skin infection and not an injection. He and attorney Clark Brewster, who represents Medina Spirit owner Amr Zedan, said they expect tests to show the ointment is responsible and not injections into one of the horse’s joints.

“I think that will shed the light most prominently on the issue here for us,” Brewster told The Associated Press by phone. “The whole basis for listing betamethasone is because it’s injected into a joint and they want you not to inject the joints too close to the race, so the whole substantive basis is out the window if it’s a salve, and it can be proven scientifically and empirically to be the salve.”

Rules in Kentucky do not differentiate punishment based on the source of the substance, which can be given to horses to help their joints and Baffert believes came from the dermatitis ointment. Churchill Downs said Medina Spirit would be disqualified if the split sample came back positive for betamethasone.

A spokeswoman for the Kentucky Horse Racing Commission declined to comment, citing the ongoing investigation. Sherelle Roberts-Pierre said the commission “values fairness and transparency and will provide information to the media and public at the close of an investigation.”

A Churchill Downs spokesman said the track is awaiting official notification of the split-sample test results from the Kentucky Horse Racing Commission.

“At the end of the day, we anticipate this case to be about the treatment of Medina Spirit’s skin rash with Otomax,” Robertson said. “We will have nothing further to say until the additional testing is complete.”

Brewster said he hoped the additional tests would come back in a week to 10 days.

If disqualified, Mandaloun will become the May 1 winner

If Medina Spirit is disqualified, Mandaloun would be elevated as the winner of the May 1 Kentucky Derby.

“I can’t control the outcome of that, so it’s something I give very, very little thought to,” said Brad Cox, who trains Mandaloun and would be the first trainer from Louisville to win the race.

Baffert is currently suspended by the New York Racing Association and not allowed to enter any horses in this weekend’s Belmont Stakes pending the Derby investigation. He could face additional sanctions following his fifth medication violation in the past 13 months.

Maryland officials allowed Medina Spirit and Baffert-trained Concert Tour to compete in the May 15 Preakness at Pimlico and filly Beautiful Gift in the Black-Eyed Susan the previous day after all three passed three rounds of prerace testing. Medina Spirit finished third and Concert Tour ninth in the second jewel of racing’s Triple Crown, which went off without Baffert in attendance.

Baffert initially denied wrongdoing in a May 9 news conference announcing the positive result, which he called “the biggest gut-punch in racing for something that I didn’t do.” He later cited the antifungal ointment as a potential cause.

Asked if he thought tests showing evidence of the steroid coming from an ointment would change the outcome, Brewster said: “You’re asking me to predict the behavior and the decision-making of others, but if you ask me ‘should’ — absolutely.”

Activist Marty Irby of Animal Wellness Action said the result of the drug test was “no shock” and called on Kentucky racing officials to take the Derby title away and ban Baffert entirely.

If Churchill Downs invalidates Medina Spirit as Derby champion, Baffert’s record-breaking seventh Derby victory would be erased in an embarrassing setback for the two-time Triple Crown winner, who is the face of horse racing.

This would be the second Derby disqualification in three years after 2019 winner Maximum Security was DQ’d for interference following the race and Country House declared the winner. The only previous time that a Derby winner was disqualified after the fact for failing a postrace drug test was 1968 with Dancer’s Image.

Just before the Derby, Baffert successfully appealed his suspension in Arkansas after filly Gamine and colt Charlatan tested positive for lidocaine following May 2020 victories at Oaklawn Park. Fines were reduced to $5,000 per horses.

California racing board officials in January voted to let 2018 Triple Crown winner Justify keep his Santa Anita Derby win despite detection of scopolamine in him in postrace samples.