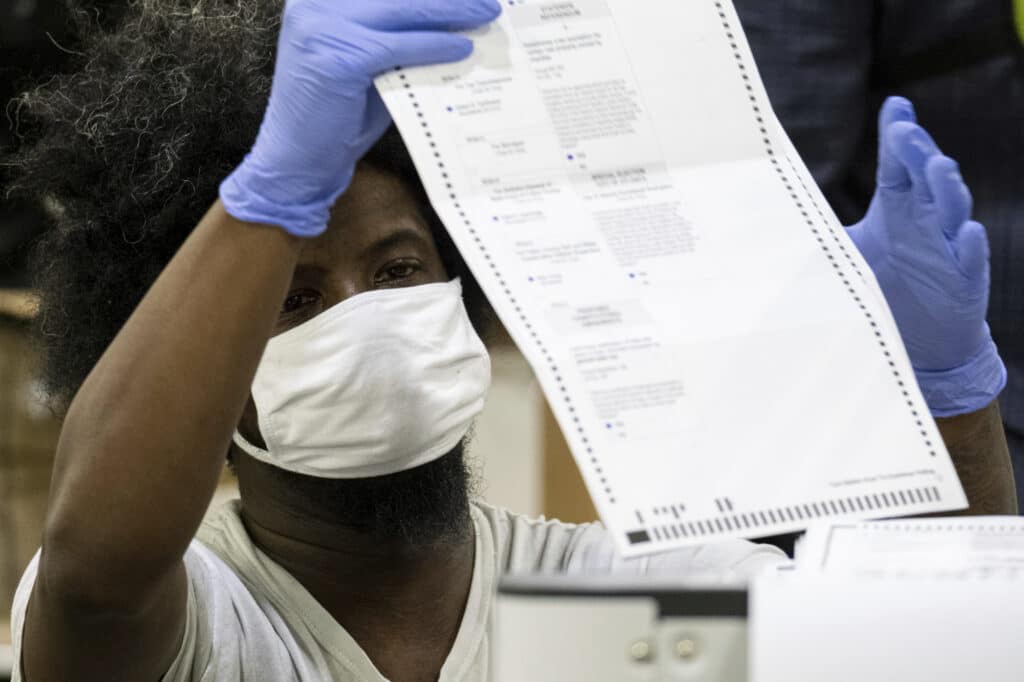 Details are coming out revealing the stressful situation that took place last fall during a Georgia ballot audit in November. Independent election monitor Carter Jones wrote up a report which placed much of the blame on aggressive behavior by election monitors. The Associated Press has the story:

ATLANTA (AP) — As a pair of election workers sat at a table counting ballots during an audit of Georgia’s presidential election in November, no fewer than eight Republican monitors swarmed around them, hurling accusations of voter fraud and taking photos in violation of the rules.

This was one of several tense situations involving party monitors that independent election monitor Carter Jones documented in reports produced during the several months he spent observing election operations in Fulton County to ensure that officials in the state’s most populous county were complying with a consent agreement.

“The party audit monitors seemed to feel as though they were detectives or sheriffs and that they were going to personally ‘crack the case’ and uncover a stolen election,” Jones wrote in a report submitted to the State Election Board on Nov. 20. “This is a gross misunderstanding of their role as monitors and certainly made the audit process more contentious — not to mention more difficult for the auditors attempting to count amidst the commotion of a full-scale argument.”

While transparency is imperative throughout the election process and monitors are necessary, political parties must do a better job of vetting and training their monitors and explaining exactly what their role is, Jones wrote. He also suggested that repeat offenders be prohibited from serving as monitors in the future.

No one from the Fulton County Republican and Democratic parties immediately responded Thursday to emails seeking comment.

Fulton County, which includes most of Atlanta, experienced many problems during its primary last June, including hourslong lines and absentee ballots that were requested but never received. The State Election Board entered into a consent order with the county to make changes for the general election. That included the appointment of Jones, who has previous experience working on elections in other parts of the world, as an independent monitor from October through January.

An executive summary of his findings was released earlier this year and Jones briefed the State Election Board in February. But detailed notes and reports produced by Jones during the process and obtained this week by The Associated Press provide more details about what he saw.

Election workers in the county were subjected to intense harassment, sometimes stemming from misunderstandings by observers about what they were seeing as ballots were counted, recounted by hand for an audit and recounted again by machine at Trump’s request.

On Nov. 14, when Jones walked over to the table where the group of GOP monitors was hovering over workers processing a batch of early voting ballots from the city of College Park, one monitor told him she’d taken a photo of the stack of ballots — all for Democrat Joe Biden, none for Trump — as evidence of voter fraud.

“Yes, for evidence. I’m concerned with the truth. As a journalist you should be too,” the woman replied, misunderstanding his role. When he told her photos weren’t allowed, she seemed to get angry and accused him of being complicit in a cover-up of voter fraud, Jones wrote.

About an hour and a half later, Jones observed the same party monitor yelling at a Fulton County attorney who had been called over to allow an elderly pair of audit workers to take a break. They had been working for hours to process a batch of 3,500 ballots and had skipped lunch so as not to violate the rules against taking breaks in the middle of a batch. But one of them was diabetic and was starting to shake from low blood sugar.

The party monitor was demanding strict adherence to the “no breaks” policy. After arguing with county elections director Rick Barron and another county official, the monitor pulled Jones into the conversation. Jones said he tried to stay neutral, but asked her to be reasonable with the application of the policy. He also let her know she could file a formal complaint with the secretary of state.

“The monitor then again accused me of colluding to cover up voter fraud and made a vague personal threat to both me and Barron,” Jones wrote in his report, adding that he included the anecdote “in an attempt to encapsulate the tense mood in the room.”

Complaints about overzealous party monitors were common during the audit, Jones wrote. Among the other issues he documented were monitors trying to speak with auditors, wandering among ballot bags and taking photos of the labels on them, trying to instruct auditors how to do their jobs, and gathering around tables when there was only supposed to be one monitor from each party for every 10 tables. The party monitors “were also performing their duties very eagerly and were frequently informing staff if they saw an issue,” Jones noted, adding that often their complaints were valid.

Earlier in the month, as the ballots were initially being counted during the week of the election, party monitors sometimes misunderstood what was happening, complained about their level of access, went around barriers to talk to election workers, shot photos and video, and exhibited “astoundingly poor mask hygiene,” Jones wrote, referring to the county’s policy that election workers wear face coverings to prevent transmission of the coronavirus.

At one point on Election Day, Jones noticed the party monitors watching him closely. He introduced himself and asked one if he’d seen anything out of the ordinary.

“We weren’t informed of your role here so it’s not our place to tell you anything,” the monitor responded and then called Jones a traitor.

During a runoff election in January, a monitor secretly recorded a 45-minute conversation with a county election official and quoted their conversation extensively in a complaint filed with the secretary of state’s office.

Multiple party monitors in January told Jones they had been recording the license plates of staffers’ cars as “evidence,” which Jones said seemed like “a massive invasion of the privacy of the election workers.”