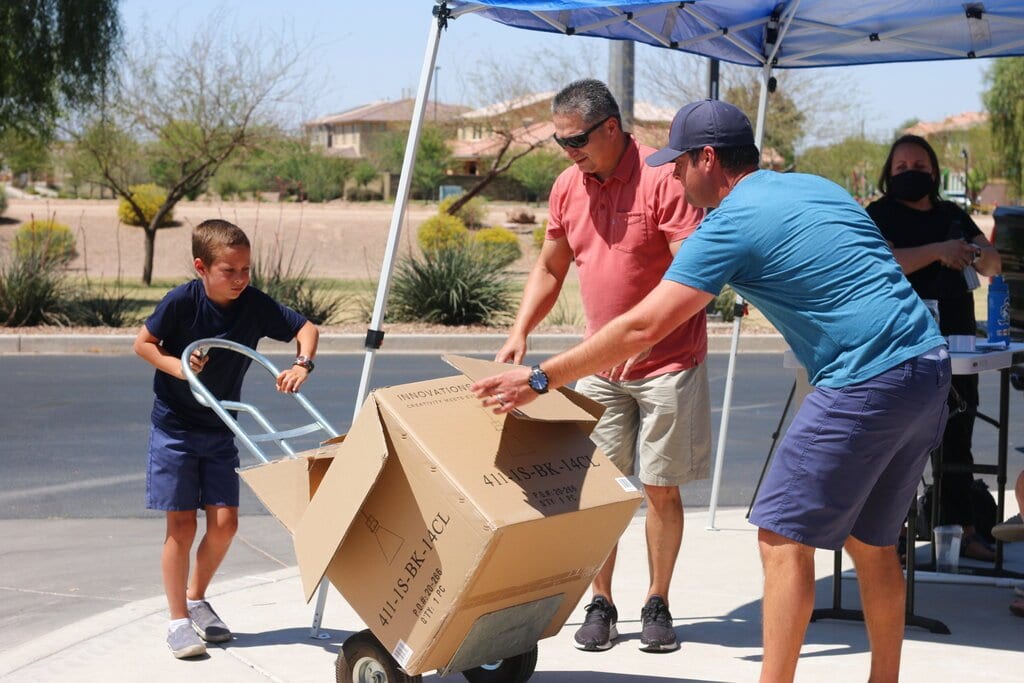 CHANDLER, Ariz. (AP) — Neighbors walked by during their morning stroll, passing families waved from their bikes and drivers slowed down long enough to read the hand-drawn sign — “Dylan’s Food Drive.”

The poster was taped to two PVC pipes that were stuck inside construction cones for support.

It was a typical scene for 8-year-old Dylan Pfeifer, who has been staging food drives from his home in metro Phoenix in response to the pandemic.

“It started because I wanted to give internet to people,” he said, explaining that he had transitioned into virtual learning at Chandler Traditional Academy’s Independence Campus in Chandler. He heard on the news that some students around the U.S. were having a hard time taking advantage of virtual learning because they didn’t have internet.

“My mom said it was going to be hard to provide internet, so we decided to do food drives,” he said.

Each drive is the culmination of hours of work that involves drawing posters, going door-to-door to hand out flyers and working with his mother to post information on Facebook.

Dylan has hosted three drives from his home in Chandler, about 20 miles (32 kilometers) southeast of Phoenix. He said he is planning his next one in June, when summer vacation begins.

“I would plan one every day if I could,” he said.

Dylan says he has collected more than 1,000 cans and boxes of nonperishable food and more than $900 in donations. On its website, St. Mary’s Food Bank in Phoenix says it can convert $1 into seven meals, meaning Dylan has been able to provide more than 6,500 meals on just monetary donations.

“It’s rare that you see kids at Dylan’s age who have a handle on what the problem is in their community, the people around them who are affected by it, and have the courage to do something about it,” said Jerry Brown, director of media relations at St. Mary’s Food Bank Alliance.

Erin Pfeifer said the best part for her, as his mother, has been watching Dylan grow despite the isolation caused by the pandemic.

“It’s been hard to interact with people, especially now, so this provides a safe way to do that. I just wanted to provide him a way to make an impact,” she said.

His father, Nick Pfeifer, agreed, saying it has been wonderful watching Dylan grow. Younger sister Evelyn Pfeifer also loves to be around the drives. The parents said she spends most of her time playing outside with the neighbor’s children during the efforts.

After the first two drives, Erin and Dylan Pfeifer have spent time volunteering at St. Mary’s Food Bank. They attended a couple of food-packing events at the facility where community donations are sorted and packed for residents and families in need.

“I volunteer because it helps the community,” Dylan said. “The hardest part is setting up and waiting. As cars come I always think — does that one have food?”

Dylan could be doing lots of things with his time but chooses to be outside in the sunny Phoenix spring weather waiting for people to stop by, said Denise Sandy-Sanchez, who was Dylan’s second-grade teacher last year.

“It is inspiring because he is just an 8-year-old boy,” Sandy-Sanchez said after donating boxes of food at his most recent drive.

“I hope you have room in your chest for that growing heart of yours,” she told him.

His grandmother Janice McGrew, who volunteered at Habitat for Humanity for more than 10 years, said Dylan comes from a giving family.

“I would tell other kids who wanted to host food drives, to just do it!” he said.

Previous Article
Sikh community in the U.S. traumatized by another shooting
Next Article
Police kill black teenage girl who was swinging knife