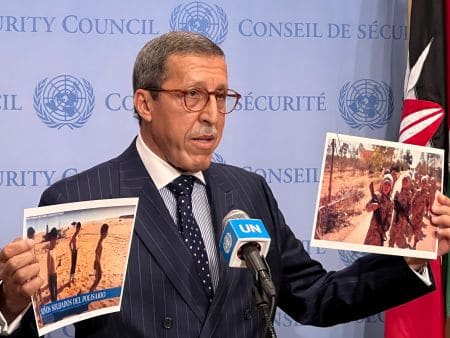 During his election campaign in 2020, US President Joe Biden raised the slogan of defending human rights. He emphasized the human rights issue not only as a domestic and national issue, but as an issue that he would use in foreign relations. He argued that he was morally superior to previous presidents who in his estimation were less committed to human rights than he is — at least that is what he told us during the campaign.

No one disagrees about the significance and centrality of human rights in building an international community free from abuse, oppression, and exploitation. However, given the enormous amount of information that has come to light regarding human rights — especially with regard to the children in the Tindouf camps on Algerian soil — I am compelled to wonder if Biden’s campaign promises were nothing more than campaign slogans.

Has Mr. Biden heard of the refugee camps across the Algerian desert called the Tindouf camps? Does the President not know about the human trafficking condemned by the UN or that children in these camps are being recruited and forced to bear arms at fight at an age that may not exceed ten years? Does our President know that these children are being trained – as in the past – in countries like Cuba and Venezuela? Does the President not know that the Sahrawi mothers in these camps are prevented from knowing the fate of their children? And does he know that if they stand up to protest their children’s abuse and mistreatment, they are persecuted, beaten, or lynched?

It would seem that Biden does not know, because he’s been shockingly quiet about it — especially, when he campaigned as if he was uniquely focused on human rights. But the truth is, how could he not know? It isn’t top secret information — its everywhere in the press. And if he and his administration know about it — which is almost certainly the case — how could they possibly remain silent without at least an impassioned condemnation of these criminal acts. If the Biden administration knows about these humans rights abuses and is silent, it presents a profound problem and it is a profound breach of trust.

But let’s go beyond the formalities, and present the picture as it is. Virtually all Americans, of whatever political persuasion, oppose human trafficking and forcing children into military fighting units used to abuse their fellow citizens. So we ought not tolerate these issues being used a mere political slogans for electoral purposes, but then see that they have no real impact or effect in national policy or foreign relations.

There can be no excuse that there are larger issues at play here. The human rights violations in the Tindouf camps have nothing to do with the issue of Western Sahara, nor with the US position on this issue. What the children are being subjected to at the hands of the Algerian-backed Polisario group is a crime against humanity.

A few days ago, the international NGO Unity for Development Network submitted a letter to the Human Rights Council in Geneva, outlining the crimes and abuses that children are exposed to on Algerian soil. The Head of the NGO, Mr. Mohamed Val Baraka, briefed the Human Rights Council on the acts of intimidation and repression against human rights defenders in the Tindouf camps and the exploitation of children in the camps. The same messages were also sent to the United Nations General Assembly.

Over the past years, the world has followed the calls of the Ambassador, Permanent Representative of Morocco to the United Nations, Mr. Omar Hilale, in which he called on the international community to take action to stop the series of intimidation and violence against the residents of the Tindouf camps, especially young children. Mr. Hilale also stressed, on several occasions, the need to prevent Algeria and its “Polisario” Front from turning the children of the Tindouf camps into “future terrorists.”

While we see that international human rights organizations move freely on Moroccan soil and transmit what they see and monitor with all transparency, we find that they are prohibited from entering Algeria. While all official visits by international missions to the Tindouf camps are being prepared in advance, the Polisario elements fabricate a rosy picture of life in these notorious camps.

Surprisingly, the whole world saw the image of an armed child securing the tour of the Personal Envoy of the Secretary-General of the United Nations to the desert. Surprisingly, we have not seen any investigation or condemnation of that.

By reviewing the files of the Polisario Front in the seventies of the last century, we will find, as evidence, the names of thousands of children who were taken from their mothers and sent to Cuban training centers under the auspices and blessing of Cuban President Fidel Castro. Many have returned to Morocco or fled outside the camps and can testify about these experiences.

Why don’t we listen to their testimonies?  Why don’t we force Algeria to open the doors of these camps?

About a year ago, the Policens Research Center in Ottawa sent a memorandum to the Canadian Prime Minister, Justin Trudeau, to put an end to the exploitation of 8,000 Sahrawi children, who were forced to take up arms in the Tindouf camps in Algeria. According to Canada’s commitment to the Vancouver Principles 2017 regarding child recruitment.

Some cynics might say that all this is just an accusation or an allegation!
But these is mounting evidence and it is certainly worthy of research and investigation.

Are we willing as a nation to risk the lives of thousands of innocent children and women by not moving and in harmony with our American principles and values, which require us to respond to the call of the child whose rights are being violated?  Are the children in Tindouf less important than other children worldwide? Is there suffering less noteworthy? Is the persecution and murder of their mothers somehow less important?

I refuse to mix or conflate the conflict between Algeria and Morocco over the Sahara with the issue of the rights of these innocent children. I hope my call will be heeded and that the Biden administration will move and pressure the Algerian government to allow international delegations and independent human rights organizations to visit these camps to find out what is happening inside.

Until that happens, I warn that our war on terrorism and extremism cannot produce results unless we exert our influence to protect these children and others worldwide. Creating a tolerant and open generation for the future in the world’s trouble spots cannot be achieved by standing idly by as violent and forcible imprisonment of children into paramilitary groups and human trafficking runs rampant and mothers who try to protect their children are physically abused and killed.