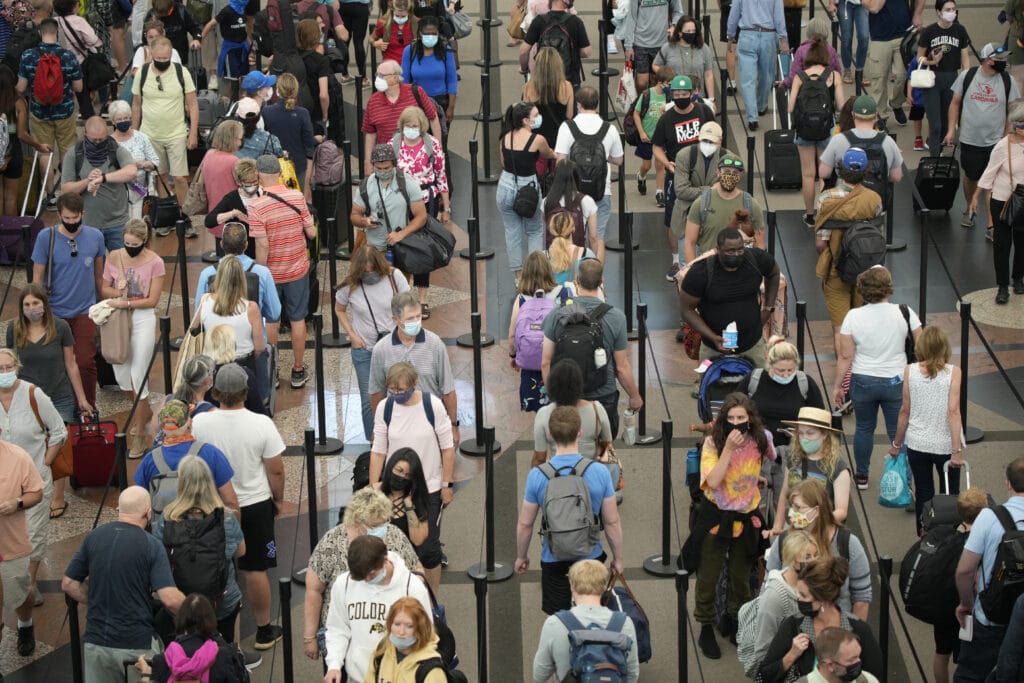 Southwest Airlines and American Airlines have both been hit with problems as the summer season began. There have been increases in delays and flights canceled. The Associated Press has the story:

Bad news for Southwest Airlines and American Airlines this summer

(AP) This summer is already shaping up to be a difficult one for air travelers.

Southwest Airlines customers have struggled with thousands of delays and hundreds of canceled flights in the past three weeks because of computer problems, staffing shortages and bad weather.

American Airlines is also grappling with a surge in delays, and it has trimmed its schedule through mid-July at least in part because it doesn’t have enough pilots, according to the pilots’ union.

At the same time, the number of Americans getting on planes is at a pandemic-era high. Just under 2.2 million travelers were screened at U.S. airports on Friday, the highest number since early March 2020.

“It was ridiculously crowded,” Tracey Milligan said of airports after a round trip from her New Jersey home to Miami last week.

Milligan and her 6-year-old daughter endured hours-long delays on both legs of the trip. Before the flight to Florida, she said, JetBlue agents first told passengers there was a discrepancy with the plane’s weight, then they were missing three crew members because the airline was short-staffed, then there was a weather delay.

“I really wanted to start screaming and cursing everybody out, but that doesn’t get you anywhere, and security will come and remove you from the plane,” she said.

At least the passengers on Milligan’s flights kept their cool. Airlines have seen a surge in unruly passengers, and some experts predict it will get worse this summer as planes become even more crowded.

There have been more than a dozen days in June and July when more than 2 million travelers went through U.S. airports, according to figures from the Transportation Security Administration. Airlines say that domestic leisure travel is back to 2019 levels, although the lack of business travelers means that overall, the number of passengers over the past week is still down slightly compared with the same days in 2019.

For the July Fourth weekend, U.S. airlines scheduled nearly twice as many flights between Thursday and Monday as they did over the same days last year, according to data from aviation researcher Cirium.

The weekend highlights the rapid turnaround boosting an industry that was fighting for survival last year. The recovery has been faster than many expected — including, apparently, the airlines themselves.

US airlines short on staff due to employees leaving during pandemic

Since the start of the pandemic, U.S. airlines have received $54 billion in federal aid to help cover payroll expenses. In return, they were prohibited from furloughing or laying off workers. However, they were allowed to persuade tens of thousands of employees to take buyouts, early retirement or leaves of absence.

Now some are finding they don’t have enough people in key roles, including pilots.

As Southwest officials braced for crowded flights over the holiday weekend, they offered to double pay for flight attendants and other employees who agree to extra work through Wednesday.

“The staffing shortage is across the board. On the pilot side, it’s a training backlog,” said Casey Murray, president of the Southwest Airlines Pilots Association. “Southwest came into the summer with very little margin.”

Murray said many pilots coming back from leave are still getting federally required training to refresh their skills and aren’t yet eligible to fly. When storms cause long delays, pilots can reach their FAA limit on the number of hours they are allowed to work, and there aren’t enough backups to step in, he said. On top of that, he said, Southwest pushed for an “aggressive” summer schedule to capitalize on rising travel demand.

Since June 14, Southwest has averaged more than 1,300 daily flights delays — a staggering 40% of its schedule — according to figures from tracking service Flightaware.com.

Southwest spokeswoman Brandy King said most delays were caused by weather, and that with fewer flights than before the pandemic, it’s harder for Southwest to recover from long thunderstorms.

At American Airlines, unions say labor shortages are contributing to delays and the scrubbing of up to 80 flights a day from the schedule through mid-July. In echoes of Southwest, the pilots’ union at American said management did not act quickly enough to retrain 1,600 pilots who were temporarily furloughed then rehired last year or replace the 1,000 who retired.

Delta canceled dozens of flights over Thanksgiving last year and again around Easter this year because of staffing problems.

Airlines that pushed people to quit a year ago are now beginning to hire again, which could help fix staffing shortages. Delta, for example, plans to hire more than 1,000 pilots by next summer, starting with about 75 by this August.

Passengers whose flights aren’t canceled or delayed still risk being on board with troublesome plane mates. Airlines have reported more than 3,200 incidents of unruly passengers since Jan. 1. Most involve people refusing to wear masks, as required by the federal government. Some of those passengers face large fines.

Andrew Thomas, a frequent flyer who teaches international business at the University of Akron and has tracked air rage for more than 20 years, believes conditions are ripe for even more incidents on planes this summer because travelers are more stressed than ever.

“The problem was there before COVID, and now you are putting more people in the sky and you exacerbate this with the masks,” Thomas said. “Service levels are atrocious. Planes are packed, they are not feeding you, it’s hard to get food in an airport. The only thing that’s easy to get is alcohol, which is not a good thing.”