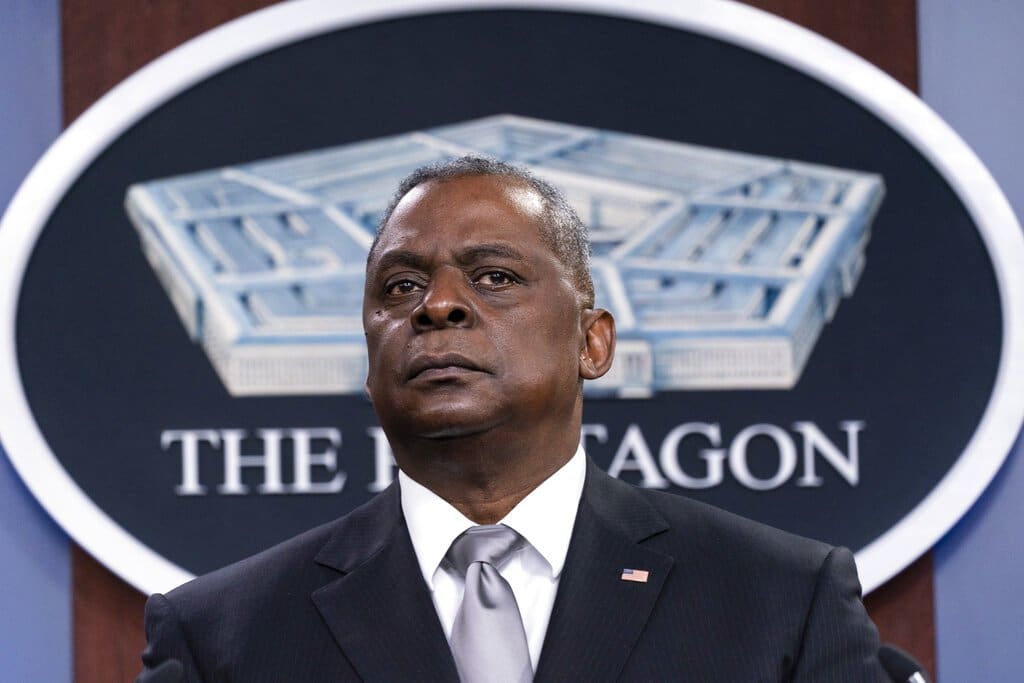 Austin’s first talks in Israel since he became Pentagon chief in January come as the United States seeks to leverage Middle East diplomatic progress made by the Trump administration, which brokered a deal normalizing relations between Israel and several Arab states.

By coincidence or not, the defense secretary arrived as Iran reported that its underground Natanz nuclear facility lost power just hours after starting up new advanced centrifuges capable of enriching uranium faster. If Israel caused the blackout, it would further heighten tensions between the two nations, already engaged in a shadow conflict across the wider Middle East. Iran called it an act of “nuclear terrorism,” but did not immediately blame anyone directly.

After meeting with Defense Minister Benny Gantz in Tel Aviv, Austin said he had reaffirmed “our commitment to Israel is enduring and ironclad.” Austin made no mention of Iran. Gantz, in his own remarks while standing beside Austin, said his country views the United States as a “full partner” against threats, “not the least, Iran.” Neither official took questions from reporters.

“The Tehran of today presents a strategic threat to international security, the entire Middle East and to the state of Israel,” Gantz said in his prepared statement. “We will work closely with our American allies to ensure that any new agreement with Iran will secure the vital interests of the world and of the United States, prevent a dangerous arms race in our region and protect the state of Israel.”

Yoel Guzansky, a senior fellow at the Institute for National Security Studies, a Tel Aviv think tank, said Austin’s visit is important in part because it is the first by a member of President Joe Biden’s Cabinet.

Austin is steeped in the finer points of Middle East defense and security issues. He served four years as head of U.S. Central Command, capping a 41-year Army career that included commanding U.S. forces in Iraq.

The key backdrop to Austin’s visit is the Israeli government’s concern about the Biden administration’s attempt to work out an arrangement to reenter the Iran nuclear deal, which in Israel’s view is fatally flawed. Netanyahu has for years described Iran as an existential threat to his nation due to Iran’s alleged pursuit of a nuclear weapon and its support for militant groups like Lebanon’s Hezbollah.

Netanyahu, leading a state with its own secret nuclear weapons program, has accused Iran of seeking nuclear weapons to use with its ballistic missiles. Iran has maintained its nuclear program is peaceful. Netanyahu has also kept up his criticism of the Iran nuclear deal, which, if followed, strictly limits Tehran’s ability to enrich and stockpile uranium, blocking it from being able to make a weapon.

“History has taught us that deals like this, with extremist regimes like this, are worth nothing,” Netanyahu said last week.

Last week, an Iranian ship said to be acting as a Revolutionary Guard base off the coast of Yemen was struck by an explosion. Iran blamed Israel for the blast.

In addition to repeated assurances by Republican and Democratic administrations that the United States will endeavor to preserve Israel’s qualitative military edge over its regional adversaries, Washington for years has invested heavily in helping Israel develop missile defense technologies.

Iron Dome is one of the most-touted successes in Israel missile defense. It is a mobile anti-rocket system developed to intercept short-range unguided rockets. It has shot down more than 2,000 projectiles fired from the Gaza Strip since it was deployed a decade ago. The U.S. Army recently bought two Iron Dome batteries at the request of Congress to counter cruise missiles.

There are questions in Israel about U.S. intentions in shifting military priorities away from the Middle East in order to focus more intensively on China and Russia as more significant threats to U.S. security.

Iran is the central source of concern by Israel and by support groups in the United States. The Jewish Institute for National Security of America, or JINSA, argued in a report last week that such a shift in U.S. priorities would “send the wrong” signal as the Biden administration begins indirect talks with Iran on reviving the 2015 nuclear deal with international powers. President Donald Trump withdrew from it in 2018.

“With reduced defensive capabilities and perceived American retrenchment from the region, Tehran and its proxies will only be incentivized to pursue even more dangerous actions to destabilize its neighbors,” the JINSA report said.

Michael Makovsky, the president of JINSA and a former Pentagon official, said Austin’s visit is especially timely, given the Biden administration’s moves toward engaging Iran on its nuclear program.

“Embracing and strengthening Israel sends a pointed signal to Iran, which will only enhance a credible military option against Iran and U.S. leverage in the talks,” Makovsky said in a statement.