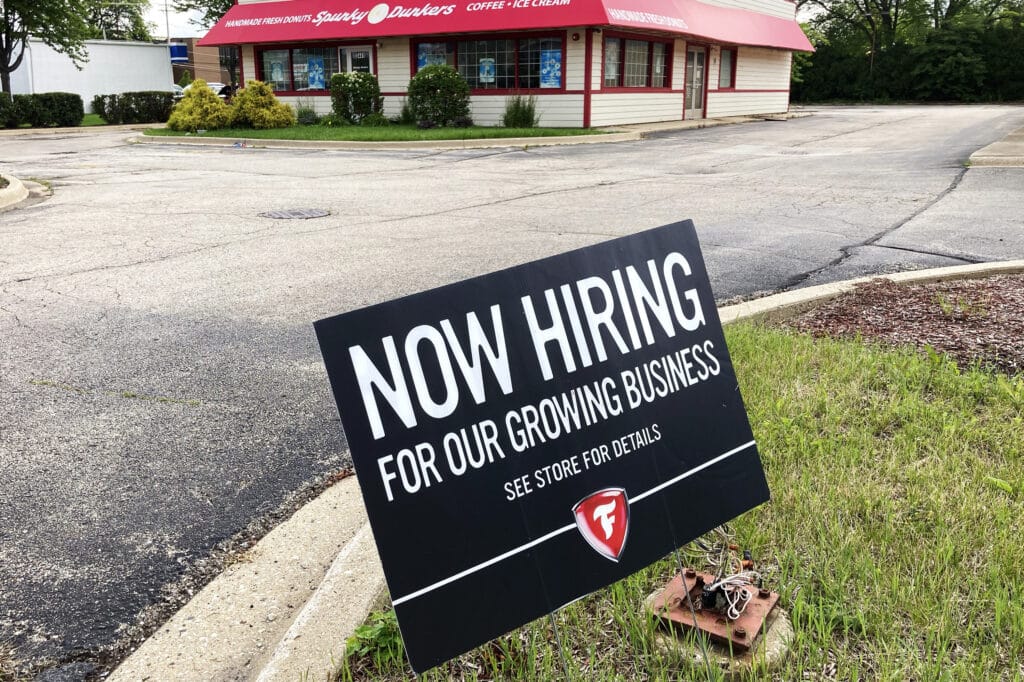 The job market is rebounding nicely after the pandemic, and here is what you need to know about the numbers. While most everything looks rosy, unemployment crept up last month. The Associated Press has the story:

5 facts about the jobs increase in June

WASHINGTON (AP) — The U.S. job market is storming into summer. Job creation and wages rose sharply in June. And more and more Americans are confident enough to quit their jobs and look for a better one.

In the strongest gain since August, employers added 850,000 jobs last month. And average wages rose a healthy 3.6% from a year earlier, a sign that businesses need workers so badly they’re willing to ramp up pay.

The June jobs report did contain one conspicuous blemish: The unemployment rate actually ticked up last month. But many economists wrote that off as a technical blip.

With vaccinations still increasing, the number of new COVID-19 cases has plummeted to an average below 12,000 a day — down dramatically from around 250,000 in early January. The brightening health picture has allowed businesses to increasingly reopen and has encouraged formerly cooped-up consumers to rush out to restaurants, shops and entertainment venues and to book vacation flights.

As employers post job openings at a record pace, they’re complaining that they can’t find enough workers to fill jobs. Economists expect the supply of workers to gradually catch up with demand. Some Americans are delaying their job search owing to lingering health concerns, difficulty making child care arrangements or generous, though temporary, federal unemployment benefits. Others have decided to retire early or train for new careers.

The economy remains 6.8 million short of the number of jobs it had in February 2020, just before COVID-19 flattened the economy.

“It’s only a question of time before hiring catches up with buoyant labor demand,” said Lydia Boussour, senior U.S. economist at Oxford Economics. “The economy is set for a jobs boom in the coming months as labor supply constraints gradually dissipate.”

Boussour said she foresees job growth exceeding 1 million a month over the summer.

“Let the employment fireworks begin,’’ she wrote in a research note.

Here are five takeaways from the June jobs report:

The 850,000 jobs that employers added last month were a pleasant surprise. Economists had predicted about 675,000. Yet the unemployment rate ticked up from 5.8% to 5.9%. And the number of people who reported being employed actually dropped by 18,000.

The contradictory numbers reflect the way the Labor Department compiles the monthly jobs report — with two surveys. The two surveys sometimes tell different stories, as they did in June. But the differences tend to even out over time.

One survey asks businesses how many people they employed during the month; this determines the number of jobs gained or lost.

The other survey asks households whether the adults living there have a job. Those who don’t have one but are looking count as unemployed; those who aren’t looking for work do not. This survey determines the unemployment rate.

The household survey, unlike the survey of businesses, counts farm workers, the self-employed and people who work at start-ups. It also does a better job of counting small-business jobs.

But the survey of businesses uses a larger sample size and is considered more precise: The Labor Department surveys 145,000 companies and government agencies, compared with just 60,000 households.

Economists also suspect that technical factors might have thrown off the household survey in June. Brian Coulton, chief economist at Fitch Ratings, for example, says the drop in employed Americans might be explained by “the challenges of seasonal adjustment after’’ huge job losses in the spring of 2020.

A hot labor market, and perhaps a rethinking of personal priorities after COVID-19, has led many Americans to leave their jobs and look for higher-paying or more satisfying work elsewhere. In June, 942,000 people were unemployed because they voluntarily left their old employer. That was up 21% from 778,000 in May, and it’s the highest such monthly figure since 2016.

“Workers clearly know that they are in the driver’s seat right now, and many appear willing to walk away from their current position before they have even a new job lined up,” says Stephen Stanley, chief economist at Amherst Pierpont Securities.

In an earlier report, the Labor Department had reported that 4 million workers quit their jobs in April. That was the highest such figure on records dating to 2000.

The wild swings in the job market — from an epic collapse in the spring of 2020 as the coronavirus triggered devastating layoffs, to a vigorous rebound over the past year — have created confusion in the way the Labor Department calculates its numbers and adjusts them for seasonal fluctuations.

For example, the department reported a sharp increase last month in jobs in local (up 155,000), state (up 75,000) and private (39,000) education as schools reopened. But those job gains might have been exaggerated, the department conceded, because the bumpy switch from remote to in-person learning has “distorted the normal seasonal buildup and layoff patterns.’’

“With most who are able to work remotely still doing so at least part of the time,” Shapiro writes, “the reliability of these data are likely compromised to some degree.”

HIGHER UNEMPLOYMENT FOR ALL RACES

The unemployment rate rose 0.1 percentage point last month for Black, Hispanic and white workers alike. The jobless rates are now 5.2% for whites, 7.4% for Hispanics and 9.2% for Black Americans.

Despite steady job growth, lingering damage from the coronavirus recession is still taking a toll on Americans of all races: Nearly 6.5 million whites were unemployed in June, up 2.6 million, or 67%, from February 2020, just before the virus struck. Over the same period, the number of unemployed is up 53% to 1.9 million for African Americans and 65% to 2.2 million for Hispanics.

BACK TO THE CUBICLE

As the virus recedes and businesses reopen, Americans are increasingly packing up their laptops, leaving makeshift offices in the kitchen and trudging back to their old places of work.

The Labor Department reported that the proportion of people who are teleworking dropped to 14.4% in June — down from 16.6% in May and a peak of 35.4% in May 2020. (The figures include anyone who worked remotely at any point in the previous four weeks.)

Companies that operate out of downtown office buildings and restaurants that cater to weekday commuters are nervously waiting to see whether — or to what extent — the work-from-home trend sticks once economic life returns to normal after COVID-19. Many companies have already told their employees to expect a hybrid system in which they could work from home on certain days of the week.