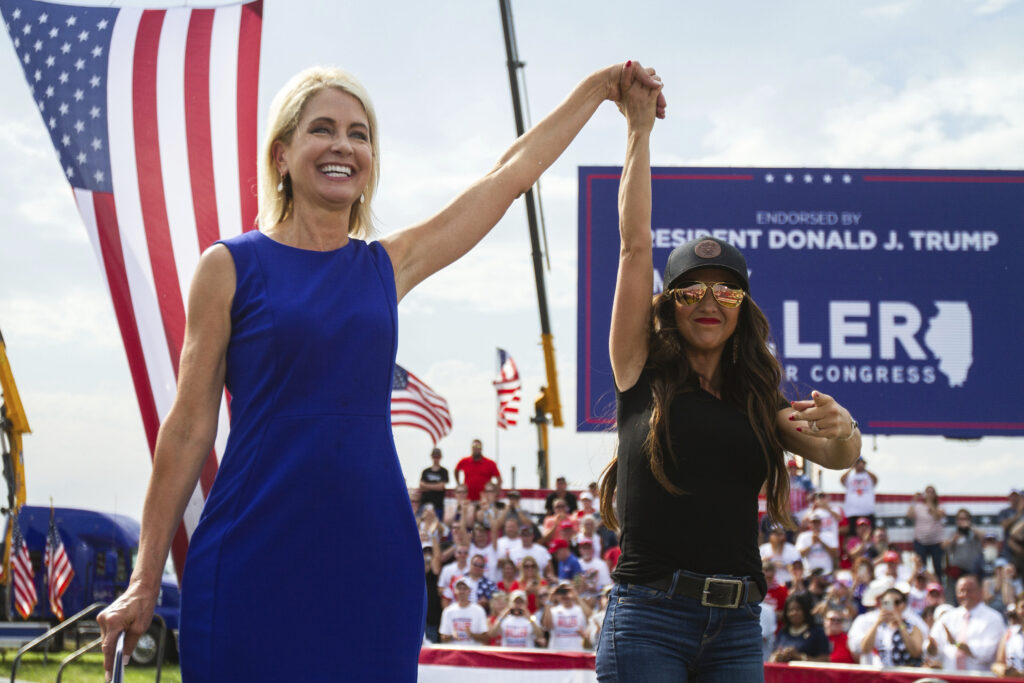 Two Republican House incumbents from Mississippi are facing primary runoffs to keep their seats, including one who voted in favor of a commission to investigate the Jan. 6 incident at the U.S. Capitol, which may be their undoing. Boebert, a first-term firebrand, saw her GOP-leaning 3rd Congressional District in western Colorado become even more Republican after redistricting, now she faces moderate state Rep. Don Coram, a rancher and hemp farmer. As reported by the AP:

Many of the Republican races will test Trump’s national influence, and others could provide the first hints of how voters are reacting to the high court’s decision on abortion

WASHINGTON (AP) — In Colorado, Republican Rep. Lauren Boebert, one of the most polarizing members of Congress, is trying to beat back a challenge from a more mainstream Republican in her primary Tuesday.

Two Republican House incumbents from Mississippi are facing primary runoffs to keep their seats, including one who voted in favor of a commission to investigate the Jan. 6 insurrection at the U.S. Capitol.

In Illinois, Republican Rep. Mary Miller, who called the Supreme Court’s decision to overturn Roe v. Wade a “historic victory for white life” during a rally with former President Donald Trump — her spokesperson said she misspoke — is going up against a fellow GOP incumbent.

A total of six states are holding congressional primary elections, primary runoffs, or special elections on Tuesday. Many of the Republican races will test Trump’s national influence, and others could provide the first hints of how voters are reacting to the high court’s decision on abortion.

Some of the top elections:

Coram argues that the incumbent’s fealty to Trump has meant neglect of her sprawling territory’s all-important agriculture issues as she seeks social and conservative media celebrity. Boebert has railed against the “Biden regime” and “socialist” Democrats. She also trumpets her gun-toting Second Amendment credentials and opposition to COVID-19 restrictions that briefly shuttered her “Shooters” restaurant.

Boebert criticizes Coram for working with legislative Democrats. Her opponent is betting voters alienated by Boebert’s provocations will choose someone more in the tradition of centrists that have played well in the area, including five-term Republican Rep. Scott Tipton, who lost to Boebert in an upset last cycle.

Also Tuesday, in Colorado’s deeply conservative El Paso County, eight-term Republican Rep. Doug Lamborn faces a challenge from the right from state Rep. Dave Williams for his 5th Congressional District seat. Williams failed to get the phrase “Let’s Go Brandon,” code for an obscenity against Biden, added to his name on the ballot.

Lamborn, who faces an ongoing House ethics investigation over whether he misused official resources for personal purposes, has survived primary challenges in the past as an ardent opponent of abortion and backer of the significant U.S. military presence in Colorado Springs. Earlier this year, Williams led a 24-hour filibuster in the statehouse over a bill allowing unrestricted access to abortion. The bill eventually became law.

Miller, first elected in 2020, is no stranger to controversy. She quoted Adolf Hitler shortly after winning her seat, saying during a rally that “Hitler was right on one thing. He said, ‘Whoever has the youth has the future.'” She later apologized after Democrats in Illinois called for her resignation. She also voted against certifying Joe Biden’s victory in the 2020 presidential election and is a member of the far-right House Freedom Caucus.

On Saturday night, she made the “white life” comment as Trump stood behind her at a rally in Mendon, drawing cheers from the crowd. Miller has since said she’s not racist, and her spokesperson said she had intended to say the ruling was a victory for the “right to life.”

She is facing five-term Republican Rep. Rodney Davis on Tuesday for the GOP nomination for the 15th Congressional District, a sprawling, heavily red district in central Illinois that was redrawn after the state’s shrinking population cost it a congressional seat.

Davis was a co-chair of Trump’s 2020 Illinois campaign but voted to certify the 2020 presidential election results. He has the backing of almost all of the district’s 35 county party chairs and has vowed to “reimplement” Trump policies, including walling off the U.S.-Mexico border.

Newman is a progressive first elected in 2020, when she defeated longtime Rep. Dan Lipinski, one of Congress’ last anti-abortion Democrats. She faces an ongoing House Ethics Committee investigation over whether she promised federal employment to a political opponent.

Casten flipped a suburban seat in 2018 that Republicans held for decades.

More than 20 candidates are vying for the chance to replace 15-term Democratic Rep. Bobby Rush, the only lawmaker who has ever beaten Barack Obama in a race. Obama challenged Rush in a 2000 U.S. House primary and lost.

The heavily Democratic 1st Congressional District was redrawn after the 2020 census and now stretches from Chicago’s South Side to Kankakee.

Among the field running to replace Rush is Jonathan Jackson, the son of civil rights leader the Rev. Jesse Jackson; Karin Norington-Reaves, a federal workforce trainer endorsed by Rush; Pat Dowell, a member of the Chicago City Council whose ward is in the district; and businessman Jonathan Swain.

Democratic Rep. Cheri Bustos also is not seeking reelection in the 17th Congressional District in northwestern Illinois, a largely rural swath that Republicans are hoping to flip in November.

Republican Esther Joy King, who came close to defeating Bustos in 2020, is again running for the GOP nomination and has a large fundraising lead over her primary rivals. The Democratic field includes former meteorologist Eric Sorenson, Rockford City Council member Jonathan Logemann and educator Angie Normoyle, who has served on both her local school board and county board.

Republican Rep. Michael Guest is seeking a third term after voting to create an independent commission to investigate the Jan. 6 insurrection at the U.S. Capitol. Fellow GOP Rep. Steven Palazzo is seeking a seventh term after being accused in a congressional ethics report last year of abusing his office by misspending campaign funds.

Both Guest and Palazzo failed to cross the 50% threshold to win outright in their June 7 primaries. Guest now faces former Navy fighter pilot Michael Cassidy, while Palazzo is going up against Mike Ezell, the sheriff of a coastal county.

The congressional runoffs are rare. The Associated Press researched state records dating back 70 years, to 1952, and found that no U.S. representative from Mississippi had been in a party primary runoff during that time.

Former Republican Rep. Jeff Fortenberry of Nebraska will face sentencing Tuesday for lying to federal agents just as voters pick a replacement for the rest of his term.

Fortenberry resigned in March after being convicted of intentionally misleading FBI agents about his knowledge of an illegal, $30,000 campaign contribution from a Nigerian billionaire at a 2016 fundraiser in Los Angeles.

Two state lawmakers, Republican Mike Flood and Democrat Patty Pansing Brooks, are running in a special election to succeed Fortenberry, who served nine terms in the Republican-heavy district that includes Lincoln and dozens of smaller, rural communities. They’ll compete again in the November to determine who serves a new term, beginning next January.