US wants life in prison for brother of Honduras president 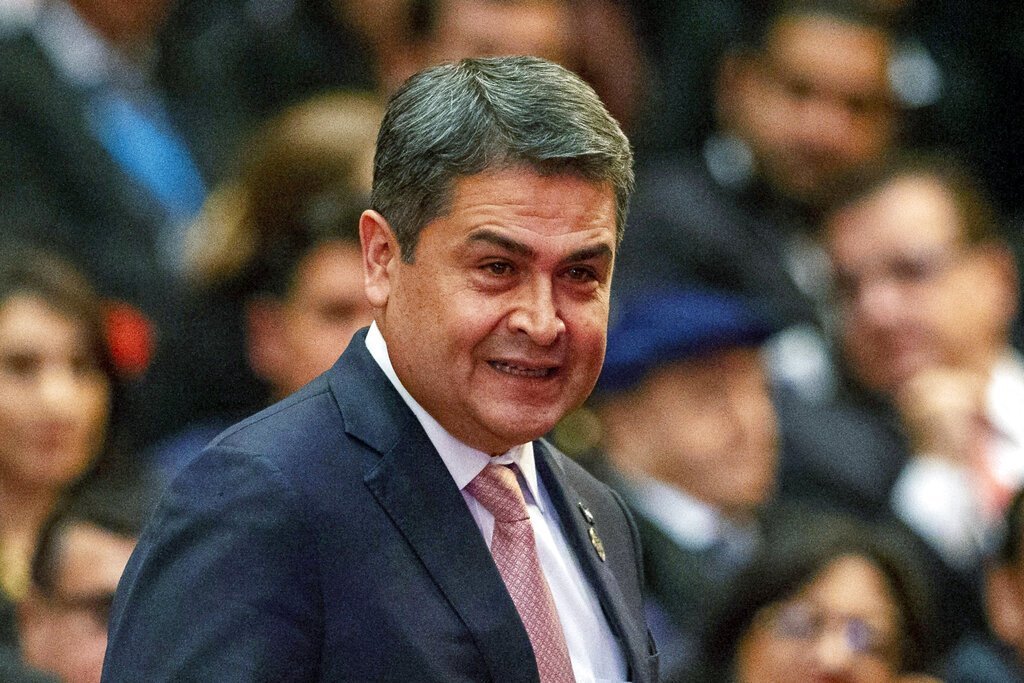 NEW YORK (AP) — A brother of Honduran President Juan Orlando Hernández should be sentenced to life in prison for running a “state-sponsored drug trafficking conspiracy” with the nation’s current leader, U.S. federal prosecutors say in documents filed ahead of a sentencing hearing scheduled next week.

Juan Antonio “Tony” Hernández, a former Honduran congressman, was convicted in October 2019 of participating in a conspiracy to traffic cocaine to the United States that involved use of machine guns.

His sentencing, which has been delayed multiple times, is scheduled for Tuesday in New York.

Documents filed by prosecutors in the Southern District of New York late Tuesday, lay out Tony Hernández’s criminal history, as well as the points where it overlapped with his brother, who served as the leader of Honduras’ congress before assuming the presidency in January 2014.

“The defendant was a Honduran congressman who, along with his brother Juan Orlando Hernández, played a leadership role in a violent, state sponsored drug trafficking conspiracy,” prosecutors wrote.

The U.S. government wants Tony Hernández to give up $138.5 million in “blood money” from his drug trafficking and pay an additional $10 million fine.

“Over a fifteen-year period, the defendant corrupted the democratic institutions of Honduras to enrich himself by transporting at least 185,000 kilograms of cocaine — a staggering amount of poison that he helped import into the United States,” prosecutors wrote. They say he also sold weapons to drug traffickers, some of which came from Honduras’ military, and controlled drug laboratories in Colombia and Honduras.

“Between 2004 and 2019, the defendant secured and distributed millions of dollars in drug-derived bribes to Juan Orlando Hernandez, former Honduran President Porfirio Lobo Sosa and other politicians associated with Honduras’s National Party,” prosecutors said.

They allege that among those bribes was $1 million from notorious Mexican capo Joaquin “El Chapo” Guzman to Juan Orlando Hernández.

President Hernández has repeatedly denied any ties to drug traffickers, as has Lobo, whose son is currently serving a 24-year drug trafficking sentence in the U.S.

Neither president has been charged.

Judge Kevin Castel, who will sentence Tony Hernández, is currently presiding the trial of Geovanny Fuentes, a Honduran accused of drug trafficking. President Hernández’s name has come up repeatedly in the trial as U.S. prosecutors continue to argue that his political rise was fueled by drug traffickers.

A Honduran accountant testified Tuesday in the trial that he fled Honduras because he felt his life was in danger after allegedly witnessing two meetings in which Fuentes paid bribes to now-President Hernández in 2013.

In both meetings, the subject was “protection and receiving drugs,” said José Sánchez, a pseudonym prosecutor used for his protection. At one Hernández was given $10,000 and at another the amount was $15,000, the accountant said.

On Wednesday, Sánchez said he arrived to the United States in June 2015 with his family and overstayed his visa. He approached prosecutors in Chicago to tell them about the two alleged meetings he witnessed but prosecutors told him that it was his word “against the president’s,” he said.

He was told to go back to Honduras for evidence, he said, but when he was about to do so, he received a call from a former coworker warning him about Fuentes looking for him to kill him, he said.

The 45-year-old man had been accountant for 15 years for rice company Graneros Nacionales. He said the meetings with Hernández were recorded by security cameras inside the company’s offices. He made copies of the recordings, he said, and gave one to a Honduran prosecutor who was later killed. He gave another copy to a Honduran called Cristian Ayala who was also later killed, he said.

He is now a struggling carpenter in the United States trying to make rent each month and is applying for asylum, he said.

On Wednesday afternoon U.S. Drug Enforcement Administration agent Sandalio González testified that Fuentes looked for the Presidential Palace location on the Waze application of his phone at least two times in May and June 2019, which is when accusations by U.S. prosecutors against President Hernández were first made public.

González arrested Fuentes in March 2020 and excerpts of his post-arrest interview were shown in the courtroom on Wednesday. In those, Fuentes admitted knowing drug traffickers but denied having paid any money to President Hernández.