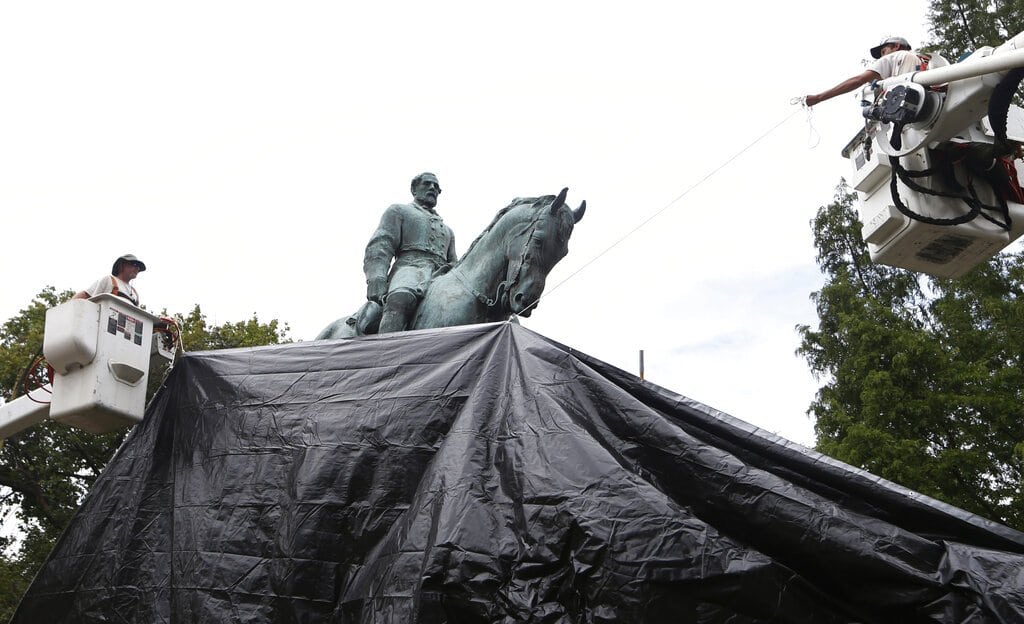 Across the country, symbols of the Confederacy are being dismantled as societal attitudes change, feeling they represent slavery. The latest effort is taking place in Virginia, where the state supreme court ruled Confederate general statues may be removed. The Associated Press has the story:

FALLS CHURCH, Va. (AP) — Virginia’s highest court ruled Thursday that the city of Charlottesville can take down two statues of Confederate generals, including one of Robert E. Lee that became the focus of a violent white nationalist rally in 2017.

The state Supreme Court overturned a Circuit Court decision in favor of a group of residents who sued to block the city from taking down the Lee statue and a nearby monument to fellow Gen. Thomas J. “Stonewall” Jackson. Charlottesville’s city council voted to remove both.

White supremacist and neo-Nazi organizers of the August 2017 “Unite the Right” rally in Charlottesville said they went to the city to defend the statue of Lee. They clashed with counterprotesters before a man plowed his car into a crowd of people, killing a woman.

In Thursday’s decision, State Supreme Court Justice Bernard Goodwyn said both statues were erected long before the passage of a law regulating the “disturbance of or interference with” war memorials or monuments.

“In other words, (the law) did not provide the authority for the City to erect the Statues, and it does not prohibit the City from disturbing or interfering with them,” Goodwyn wrote.

S. Braxton Puryear, one of the attorneys for the residents who sued, said he hadn’t read the ruling yet and couldn’t immediately comment on it. Frederick W. Payne, a Charlottesville lawyer who was listed as the lead plaintiff in the lawsuit seeking to block the statue’s removal, also declined comment Thursday.

A spokesman for the city of Charlottesville didn’t immediately respond to a call and email seeking comment on the court’s ruling.

The Virginia Division of the Sons of Confederate Veterans, Inc., and The Monument Fund, Inc., also were plaintiffs in the lawsuit filed against the city in March 2017.

Court rules that law protecting monuments and memorials did not apply

Plaintiffs’ attorneys argued that a law enacted by the state’s General Assembly in 1997 prevented the city from removing the two Confederate statues. The city argued that the law couldn’t be applied retroactively and did not apply to statues that cities erected before 1997.

The state Supreme Court agreed with the city, concluding there is no language in the statute that demonstrates the General Assembly intended for the law to apply to monuments or memorials that cities erected before 1997.

“The circuit court erred in failing to interpret the statute according to its plain language meaning,” Goodwyn wrote.

The state Supreme Court also ruled that the circuit court erred in ordering the city to pay for the plaintiffs’ attorneys’ fees and costs.

The 1997 law that barred local governments from removing Confederate statues was repealed in 2020, after Democrats gained control of the General Assembly in the 2019 elections. Since then, local governments across the state have removed statues that stood for a century or more.

The new law does impose some requirements on local governments seeking to remove a statue, like holding a public hearing and offering the statue to a museum or historical society for possible relocation. In Thursday’s ruling, the judges indicate in a footnote that they are making their ruling based on the old law.

Virginia Attorney General Mark Herring said he determined nearly four years ago that the law purporting to block removal of Confederate statues did not apply retroactively and “was not the blanket prohibition that its proponents had made it out to be.” Thursday’s ruling “confirmed that we were right,” Herring added in a statement.

“I have worked hard to help remove poisonous Confederate propaganda from our publicly-owned spaces, because I believe it glorifies a false history and sends a dangerous and divisive message about who and what we value,” he said.

In Richmond, city officials have removed numerous statues on the city’s famed Monument Avenue after they became a focal point of racial justice protests last summer. But a statue of Lee has not yet been removed; a lawsuit is under way to determine whether the statue, which sits on state property and is subject to an 1890 deed that purports to restrict its removal, can be taken down.