Venezuela’s revolution divided in the cradle of Chavismo 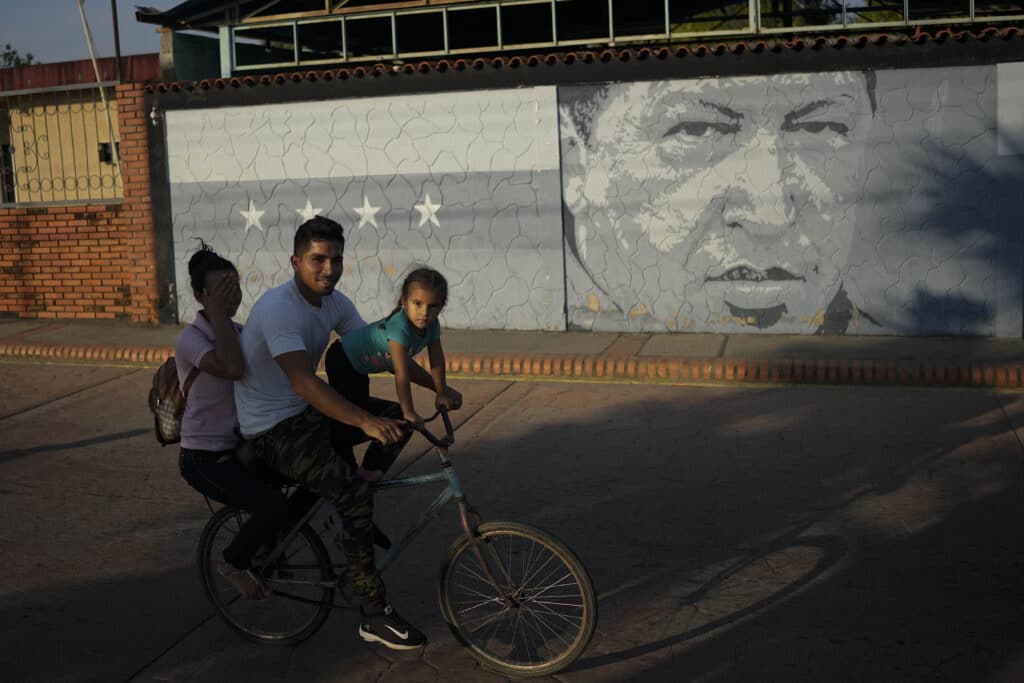 The policies of such leaders like Hugo Chávez, who believed in “Chavismo” at his inner core that socialism and socialist policies are the answer to all the problems nations like Venezuela face as well as the world, never end well. Those people who supported him and his ideology, need to remember that those kinds of ideas always end in the citizenry being overwhelmed by a crushing economy and the lack of basic public services, always. As reported by the AP:

SABANETA, Venezuela (AP) — Nancy Mora yearns for the affection she says late Venezuelan President Hugo Chávez showed his people. She touches her heart when she talks about the man, she still calls her president and believes the revolution he started will continue as long as self-proclaimed Chavistas like her are alive.

But in Mora’s northwestern Venezuelan community of Sabaneta, Chávez’s birthplace, not everyone remains as faithful as she does to his ideas. Some of his longtime supporters now feel abandoned by the ruling party and overwhelmed by a crushing economy and lack of basic public services.

The internal struggles of Chavismo were encapsulated by the apparent defeat — and its aftermath — of one of Chávez’s brothers during gubernatorial elections in November. Now, after the apparent winner in the state of Barinas was retroactively disqualified, a re-do of the election is scheduled for Sunday.

The ballot for the special election for Barinas does not include a Chávez for the first time in more than two decades, yet the bid from the ruling United Socialist Party of Venezuela to draw voters to the polls hinges on what the last name symbolizes for people like Mora.

Mora said Chávez taught her that the revolution stands for equality. “It is a socialism of love,” she said, but she could not explain why millions in the South American country struggle to feed themselves on a $2 monthly minimum wage while others can drop $15 for a coffee shop lunch.

Chávez, elected in 1998, promised to improve the lives of Venezuela’s poorest using the country’s oil. He expanded social services, including housing and education, thanks to the country’s oil bonanza, which generated revenues estimated at some $981 billion between 1999 and 2011 as oil prices soared.

But Venezuela’s corruption, a decline in oil production and economic policies led to a crisis that became evident in 2012. Chávez would die of cancer the following year after appointing Nicolás Maduro as his successor.

The country’s political, social, and economic crises, entangled with plummeting oil production and prices, have continued under Maduro’s watch. More than 5 million people have left the country, and millions of others live in poverty, facing low wages, high food prices and the world’s worst inflation rate.

The food assistance agency of the United Nations has estimated that one of every three Venezuelans is struggling to consume enough daily calories.

Vote counts for the ruling party have been declining since 2017. About 6.5 million people voted for pro-government candidates during that year’s regional elections. On Nov. 21, that number dropped to about 3.7 million.

Opposition candidate Freddy Superlano was ahead of Argenis Chávez by less than 1 percentage point when the country’s highest court disqualified him on Nov. 29. The court, which is one of many government bodies seen as loyal to the Maduro government, ignored a presidential pardon that had made Superlano and other members of the opposition eligible to run.

The moves in Barinas raised further doubts about the fairness of Venezuela’s electoral system following the first vote in years in which most major political movements took part, one monitored by over 130 observers from the European Union, the U.N. and the U.S.-based Carter Center.

Rosa Hidalgo has a poster from Chavez’s last presidential campaign in a corner of her house. She is close to his family and repeatedly cooked for him even after he became president. She is thankful for the refrigerator he gifted her, but she still did not vote for his brother on Nov. 21.

For her, the revolution “may be” a thing of the past. She now prays for jobs for her community so that people do not have to immigrate.

“Chávez was very good. But what happened was like if you were good and you put me in charge and I’m not good and I mess up your party and your work,” Hidalgo, 84, said referring to Maduro and his team. “Maduro did not come to my house to ask for votes. Maduro arrived because Chávez knew that he was going to die. I’m hardly a Madurista.”

That distinction is ever more common.

Oscar Vallés, political analyst and professor at Metropolitan University of Caracas, said many Chavistas want to maintain some type of access to the social programs offered by the government, such as boxes of subsidized food and vouchers, but they are not willing to openly promote Maduro’s work.

“They have an ambiguous position on this,” Vallés said. “They punish in a certain way those Maduro officials who do not fulfill their role, so much so that Maduro, as a result of the result of Nov. 21, said that the great enemy of the revolution are public officials who do not comply (with their duties) and whose heads will roll.”

In addition to Superlano’s disqualification, his wife, who was chosen as his successor, was disqualified. So was her substitute. Sunday’s ballot includes Sergio Garrido, candidate for the U.S.-backed opposition, Claudio Fermin, an opposition dissident, and Jorge Arreaza, a former foreign minister.

When Maduro announced Arreaza as the ruling party’s candidate, Hugo Chávez was repeatedly mentioned in speeches, two large photos of him were placed on a gymnasium where people gathered for the announcement, and his connection to Arreaza was also highlighted. Arreaza is the father of one of Hugo Chávez’s grandchildren.

“Chávez will of course remain as a mythical figure that the whole world will want to emulate on the side of Chavismo, but the political cost of the Maduro regime is extremely high,” Vallés said. “I think that Chavismo is increasingly reduced and there will come a time when being a candidate for a political position with (the ruling party’s logo) on the chest is going to be even unfavorable.”