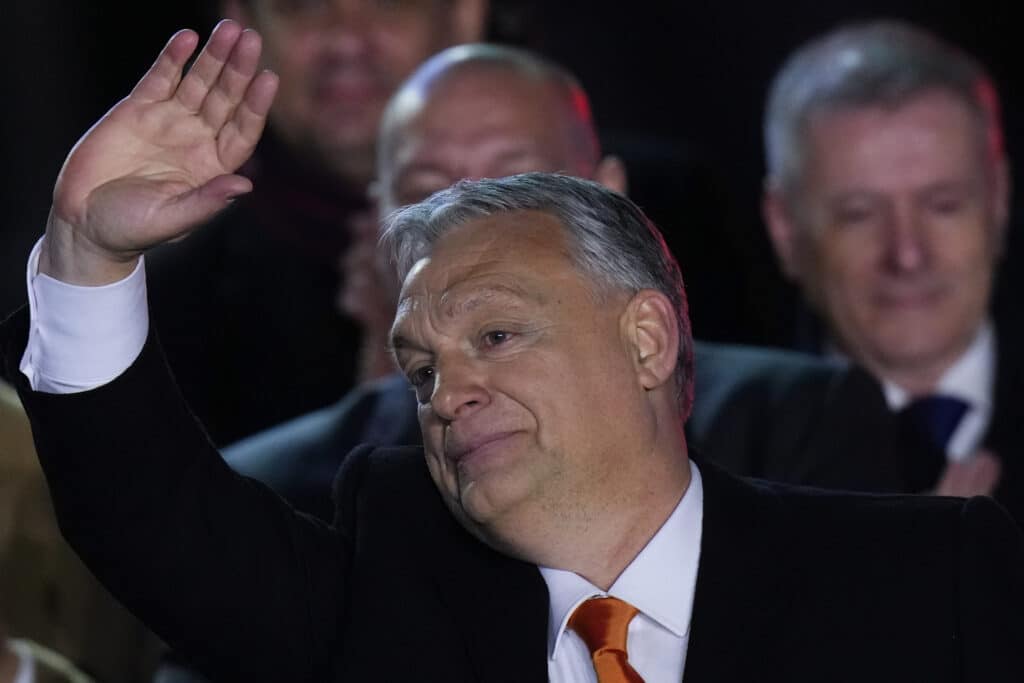 Nothing is so disheartening to a person who is equally knowledgeable about the political orders of the United States of America and present-day Hungary than being confronted with the lying and corrupt narratives of Viktor Orban’s government and those American media personalities who eagerly carry its messy water.  Indeed, the American conservatives’ genuine constitutional principles of representative democracy have been turned by the fake Hungarian conservatives into an inverted democracy and a despicable hoax that have been compounded by the illegitimacy of a kleptocratic and coercive despotism.

Viktor Orban’s fitful attempt at artificially creating the illusion of a spiritual analogy with the original American CPAC was on full display at the Hungarian so-called Conservative Political Action Conference on May 19-20, 2022, in Budapest.  Short and grossly overweight, with an accent imitating Miklos Horthy the disgraced dictator of the 1920s, 1930s, and half of the 1940s, standing alone at the artificially raised culprit and playing the role of the keynote speaker, the possessor of all knowledge and wisdom, the re-elected Prime Minister addressed members of his exclusive joint stock company, also referred to interchangeably as the Orban Mafia and the National Club of Kleptocratic Nobodies.  Vowing to continue being the most patriotic, the most compassionate defender of the Hungarian families and the most religiously pious leader of his permanently victimized nation, he launched into the fiercest criticism of the hands, namely the collective West, that fed his economically bankrupt and strategically totally insignificant country.

Comparing the persecutions that his righteous party as well as governments have faced since 1990 from the “Liberal Left” to the political struggles between the Democrats and Republicans in the United States of America, he assured his audience that under his leadership Hungary will always remain the bastion of conservative principles.  Describing the miseries of Communist Hungary, which his father, himself and his comrades served unconditionally, he falsely credited himself with the “draining the swamp.”   Trying to enhance his reputation as a God-fearing person, while in the early 1990s he demanded from the clergy to go down to their knees and ask for forgiveness for their hypocrisy, he quoted the most unfortunate sentence from the Bible thus:  “Every tree is known by its own fruit.”  Amen!  Unsaid was the fact that the only religion he and his close associates recognize is the religion of money, which is the only one in his government that has no unbelievers.

Praising the so-called “Hungarian formula,” which he defined as playing by “our own rules,” he counterintuitively suggested that his winning formula consists of refusing “to accept the solutions and the paths offered by others.”  That much for his American-style conservatism.  In a different vein, he also addressed his government’s foreign policy principles.  Criticizing the “Progressives” for their erroneous ideology of good and bad governments, he triumphantly announced: “The Nation First!  Hungary First!”  This last argument served surreptitiously to intimate that Russia’s illegal invasion of Ukraine is not within his competence to be judged and simultaneously to bemoan Hungary’s unlucky geographic position, blaming all the past, present and future calamities of the country on the war without unequivocally naming the guilty party.  Indeed, as soon as he and members of the Parliament were sworn in, his servile two-thirds majority amended Article 53, Paragraph 1, about the state of emergency, making the Prime Minister the sole authority to govern by decrees.

True to his despotic mentality, he bragged about controlling the Hungarian media and from his absolutist perch to state that painting the opposition as pure evil and eliminating them from the political discourse are preconditions of building a prosperous Hungary.  In practice, his gorillas prevented the domestic and foreign media from being present at the Conference, including the conservative outlets in the United States of America and the European Union.  Concerning the economy, he cited a self-created idiotic motto that sounded thus:  “Even those who did not vote for us end up better off.”  What a shameless lie!  What an outrageous hypocrisy!  By all the numbers and statistics, Hungary’s is the second or the first worst performing economy within the European Union.  The reasons being twofold.  Unbreakable corruption and incompetence.  The reality is that economic decisions are exclusively driven by selfish personal interests.  The case in point is that the richest man in Hungary by the name of Lorinc Meszaros is an elementary school best friend of Viktor Orban’s.  Having been an uneducated as well as uncultured pipe fitter before his best friend became Prime Minister, he lived from paycheck to paycheck throughout his professional life. Former President Trump and a host of prominent Republicans addressed the Conference via ZOOM.  Their speeches were all completely devoid of reality because their limited knowledge of Viktor Orban’s Hungary came from Tucker Carlson’s and Rod Dreher’s woefully biased and corrupt narratives.  Viktor Orban’s Hungary is in the clutches of multiple crises.  Foremost of all are the approaching economic and financial collapses due exactly to the domestic and foreign policies that Viktor Orban praised to high heavens at the Conference.  Moreover, his bankrupt policies have generated mutual fears by the people and his kleptocratic oligarchy.  Finally, trying to extend his influence beyond his capabilities have made Hungary the pariah of the European Union and the rest of the world.  The sooner the supporting members of the Republican Party realize that Viktor Orban and his conservatism are nothing but unreal linguistic gymnastics, the sooner NATO and the European Union will begin to cleanse themselves from the curse of his destructive narcissistic and megalomaniac political mischief.