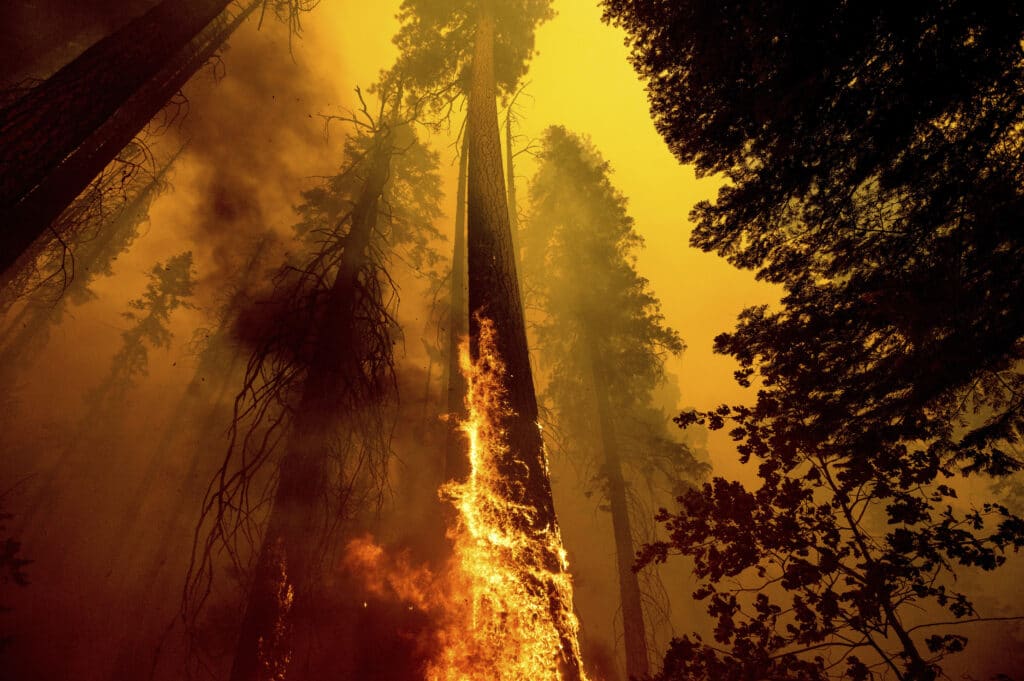 The current double-dip La Nina set a record for strength last month and is forecast to likely be around for a rare but not quite unprecedented third straight winter. Scientists are noticing that in the past 25 years the world seems to be getting more La Ninas than it used to and that is just the opposite of what their best computer model simulations say. As reported by the AP:

Something with weather is up with La Nina, the natural but potent weather event linked to more drought and wildfires in the western United States and more Atlantic hurricanes. It’s becoming the nation’s unwanted weather guest and meteorologists said the West’s megadrought won’t go away until La Nina does.

The current double-dip La Nina set a record for strength last month and is forecast to likely be around for a rare but not quite unprecedented third straight winter. And it’s not just this one. Scientists are noticing that in the past 25 years the world seems to be getting more La Ninas than it used to and that is just the opposite of what their best computer model simulations say should be happening with speculated human-caused climate change.

“They (La Ninas) don’t know when to leave,” said Michelle L’Heureux, head of the National Oceanic and Atmospheric Administration forecast office for La Nina and its more famous flip side, El Nino.

An Associated Press statistical analysis of winter weather La Ninas show that they used to happen about 28% of the time from 1950 to 1999, but in the past 25 winters, they’ve been brewing nearly half the time. There’s a small chance that this effect could be random, but if the La Nina sticks around this winter, as forecast, that would push the trend over the statistically significant line, which is key in science, said L’Heureux. Her own analysis shows that La Nina-like conditions are occurring more often in the last 40 years. Other new studies are showing similar patterns.

What’s bothering many scientists is that their go-to climate simulation models that tend to get conditions right over the rest of the globe predict more El Ninos, not La Ninas, and that’s causing contention in the climate community about what to believe, according to Columbia University climate scientist Richard Seager and MIT hurricane scientist Kerry Emanuel.

What Seager and other scientists said is happening is that the eastern equatorial Atlantic is not warming as fast as the western equatorial Atlantic or even the rest of the world with climate change. And it’s not the amount of warming that matters but the difference between the west and east. The more the difference, the more likely a La Nina, the less the difference, the more likely an El Nino. Scientists speculate it could be related to another natural cycle, called the Pacific Decadal Oscillation, or it could be caused by human-caused climate change or both.

“At this point we just don’t know,” L’Heureux said. “Scientists are watching and I know, are actively studying. But it’s really important because of regional weather conditions. We need to get this right.”

La Nina is a natural and cyclical cooling of parts of the equatorial Pacific that changes weather patterns worldwide, as opposed to El Nino’s warming. Often leading to more Atlantic hurricanes, less rain and more wildfires in the West and agricultural losses in the middle of the country, studies have shown La Nina is more expensive to the United States than the El Nino. Together El Nino, La Nina and the neutral condition are called ENSO, which stands for El Nino Southern Oscillation, and they have one of the largest natural effects on climate, at times augmenting and other times dampening the big effects of human-caused climate change from the burning of coal, oil and gas, scientists said.

“They really have a very, very strong” effect, said research scientist Azhar Ehsan, who heads Columbia University’s El Nino/La Nina forecasting. “So, a third consecutive La Nina is not at all a welcome thing.”

He said the dangerous heat in India and Pakistan this month and in April is connected to La Nina.

The current La Nina formed in the late summer of 2020 when the Atlantic set a record for the number of named storms. It strengthened in the winter when the West’s drought worsened and in the early summer of 2021 it weakened enough that NOAA said conditions were neutral. But that pause only lasted a few months and by early fall 2021 La Nina was back, making it a double dip.

Normally second years of La Nina tend to be weaker, but in April this La Nina surprised meteorologists by setting a record for intensity in April, which is based on sea surface temperatures, Ehsan said.

“These are very impressive values for April,” L’Heureux said. Still, because La Ninas historically weaken over summer and there are slight signs that this one may be easing a bit, there’s the small but increasing chance that this La Nina could warm just enough to be considered neutral in late summer.

La Nina has its biggest effect in the winter and that’s when it is a problem for the West because it’s the rainy season that is supposed to recharge areas reservoirs. But the West is in a 22-year megadrought, about the same time period of increasing La Nina frequency.

La Nina “is a pretty important player; it may be the dominant player,” said Swain, who has a blog on Western weather. “It could be responsible for one-third, maybe one-half of the given conditions if it is pronounced enough.”

“It’s much less likely that the Southwest will see at least even a partial recovery from the megadrought during La Nina,” Swain said.

It’s all about winds 6 to 7 miles (10 to 12 kilometers) above the water surface. One of the key factors in storm development is whether there is wind shear, which are changes in wind from high to low elevations. Wind shear can decapitate or tip over hurricanes, making them hard to strengthen and at times even stick around. Wind shear can also let dry air into hurricanes that chokes them.

When there’s an El Nino, there’s lots of Atlantic wind shear and it’s hard for hurricanes to get going. But La Nina means little wind shear in the Atlantic, making it easier for storms to intensify and do it quickly, said University of Albany hurricane researcher Kristen Corbosiero.

Some areas like eastern Australia and the arid Sahel region of Africa do better with more rain during La Nina. India and Pakistan, even though they get extra spring heat, also receive more needed rain in La Ninas, Columbia’s Ehsan said.

A 1999 economic study found that drought from La Nina cost the United States agriculture between $2.2 billion to $6.5 billion, which is far more than the $1.5 billion cost of El Nino. A neutral ENSO is best for agriculture.

Columbia’s Seager said even though there may be some chance and some natural cycles behind the changes in La Nina because there’s likely a climate change factor, he thinks there will probably be more of them.