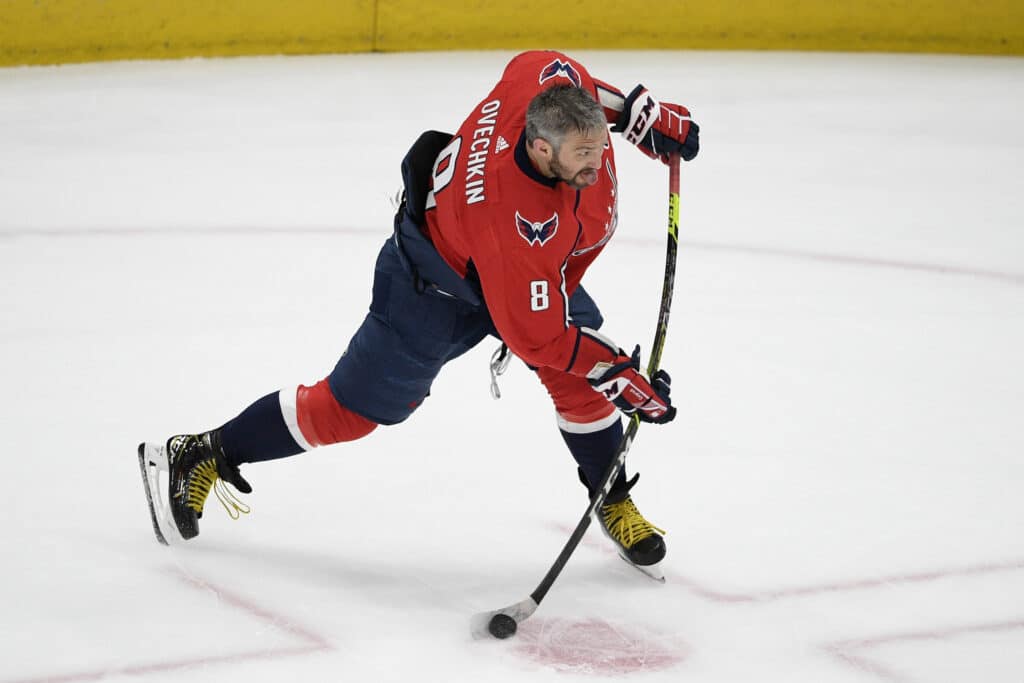 All eyes are on hockey player Alex Ovechkin as the Washington Capitals choose who they want to play next season. Since he wants to remain there, and controls negotiations along with owner Ted Leonsis and general manager Brian MacLellan, things look good. The Associated Press has the story:

ARLINGTON, Va. (AP) — Alex Ovechkin said Tuesday he is confident he will sign an extension and play again next season for the Washington Capitals franchise he led to the Stanley Cup in 2018. Evgeny Kuznetsov and T.J. Oshie also hope to be back.

After a third consecutive first-round exit following their 2018 Stanley Cup run and the Seattle expansion draft looming, there is no assurance all three will be teammates next season. Ovechkin is the surest bet because he controls negotiations along with owner Ted Leonsis and general manager Brian MacLellan; the longtime captain will likely be able to play for the Capitals as long as he wants.

“We still have time,” said Ovechkin, whose $124 million, 13-year contract expires this summer. “Obviously I want to finish my career here. I’m pretty sure we will do something soon.”

Asked when that will get done, Ovechkin joked, “Maybe we’ll sign contract right now” after going through exit interviews. He and the Capitals were eliminated by the Boston Bruins in five games, ending Ovechkin’s season prior to the third round of the playoffs for the 15th time in 16 NHL seasons.

Ovechkin played through a back problem against Boston and missed seven of eight games late in the season with a leg injury. He still had two goals and two assists and said he wouldn’t need surgery.

“I have back problem, (but) I was feeling good,” Ovechkin said. “I didn’t take any medicines. I don’t take any shots. I feel pretty confident, and it was not bothering me at all.”

The Russian winger is sixth on the NHL’s career goal list with 730, 164 behind of Wayne Gretzky’s record. Despite losing several games because of work stoppages and the pandemic, Ovechkin said there are still chances to chase that mark.

“You still have chances,” Ovechkin said. “You just have to go out there and do your thing and maybe it’s happen, maybe not, but one step at a time.”

Ovechkin, who turns 36 in September, said he still loves the game and wants to keep playing as long as he can. It’s almost impossible to imagine him playing for another NHL team, though Ovechkin could moonlight a season or more back home in the Kontinental Hockey League at some point.

Teammates would be surprised if Ovechkin isn’t back.

The salary cap remaining flat at $81.5 million and Washington wanting to remain a playoff contender will likely keep Ovechkin from getting a substantial raise. But the Capitals also won’t lowball the face of the franchise.

“We’ve won a Stanley Cup, we want to win more Stanley Cups, we’ve built D.C. into a hockey town,” Leonsis said May 14. “Alex is happy. Alex knows that if he plays five more years, 10 more years, whatever it is, we’ve got his back.”

Trade rumors emerged about Kuznetsov after he was back on the NHL COVID-19 protocol list and unavailable May 4 after missing several weeks early in the season because of COVID-19.

The first time, the Capitals were fined $100,000 for violating protocol for Kuznetsov, Ovechkin, goaltender Ilya Samsonov and defenseman Dmitry Orlov being together unmasked in a hotel room. Kuznetsov was also suspended three games by the NHL in September 2019 for “inappropriate conduct” less than a month after he was banned from playing for Russia for four years because of a positive test for cocaine.

Kuznetsov has four years left on his contract at a $7.8 million cap hit with a limited no-trade clause. He said “of course” he’d like to be back.

“I like to be here, and this organization, the team, did a lot of good things for me and I believe I done some good things, also,” Kuznetsov said. “It’s like a long marriage right? Sometimes in family situations, (things) happen when you have to go through some tough moments.”

Oshie is originally from Everett, Washington, and has been linked to the Kraken with the expansion draft coming up in July. Still, coach Peter Laviolette is a fan of Oshie, who doesn’t want to leave the Capitals.

“I signed an eight-year deal here because this is where I wanted to spend the rest of my career and retire here,” Oshie said. “I’ve approached every day since I’ve been here like this is going to be the last team that I ever play for.”

Zdeno Chara said he will take a few days to talk with his family before deciding whether to retire at age 44 or try to play another season. Chara, who captained Boston to the Cup in 2011, left the Bruins when they couldn’t guarantee him a regular role on their blue line and signed a one-year deal with Washington.

“It’s not always decision that I can make myself,” Chara said. “After those conversations I’m going to probably let those emotions settle in and see where I’m at.”

The Capitals thought Henrik Lundqvist and Samsonov would be their goaltenders this season. Then Lundqvist discovered he had a heart condition that kept him from playing, Samsonov got COVID-19 and Vitek Vanecek became the go-to guy in net.

What that position looks like next season is anyone’s guess. Vanecek left Game 1 of the Bruins series with a lower-body injury to give way to veteran Craig Anderson, and Samsonov started Games 3-5 with mixed results. Washington will have to choose which of Samsonov or Vanecek to protect from Seattle and could look for an experienced netminder via trade or free agency.