What’s happening with the current clash in Jerusalem 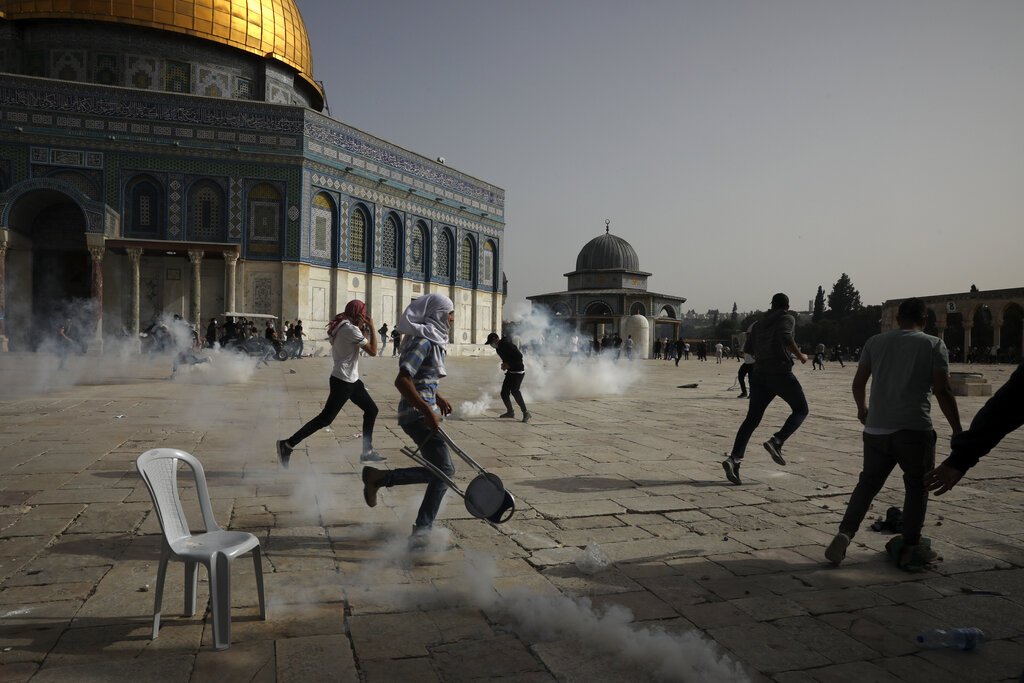 Over the last few weeks, violence has spiked around major religious sites in Jerusalem’s Old City. It began after Israel blocked Palestinians from gatherings there at the beginning of Ramadan. The Associated Press has the story:

The origination of recent fighting in Jerusalem’s Old City

JERUSALEM (AP) — For weeks now, Palestinian protesters and Israeli police have clashed on a daily basis in and around Jerusalem’s Old City, home to major religious sites sacred to Jews, Christians and Muslims and the emotional epicenter of the Middle East conflict.

Jerusalem has been the scene of violent confrontations between Jews and Arabs for 100 years and remains one of the most bitterly contested cities on earth. The latest clashes began a month ago with an Israeli move to block some Palestinian gatherings at the beginning of the Muslim holy month of Ramadan, already a time of heightened religious sensitivities. After those restrictions eased, tensions over a plan to evict dozens of Palestinians from an east Jerusalem neighborhood continued to fuel confrontations.

On Monday, stun grenades echoed across a holy hilltop compound, and hundreds of Palestinians were hurt in clashes between stone-throwing protesters and police firing tear gas and rubber bullets. Police were also injured.

Here’s a look at why Jerusalem always seems to be on edge — and what set off the latest round of violence.

Israel views Jerusalem as its “unified, eternal” capital. It had captured east Jerusalem, which includes the Old City, in the 1967 Mideast war, along with the West Bank and Gaza. Palestinians want those territories for their future state, with east Jerusalem serving as their eventual capital. But Israel annexed the eastern part of the city in a move not recognized internationally.

The fate of east Jerusalem has been one of the thorniest issues in the peace process, which ground to a halt more than a decade ago.

Related: Analysis: New round of violence in Jerusalem

Israelis on Monday were set to mark Jerusalem Day, a national holiday celebrating the annexation. In past years, thousands of Israelis — mainly religious nationalists — have marched through the Old City, including the densely populated Muslim Quarter, in a display considered provocative by many Palestinians.

In recent days, hard-line Israelis have staged other events in east Jerusalem, leading to scattered, violent altercations with Palestinians.

Monday’s clashes took place in and around the Al-Aqsa Mosque in the Old City. The mosque is the third-holiest site in Islam and sits on a sprawling plateau that is also home to the iconic golden Dome of the Rock. Muslims refer to the compound as the Noble Sanctuary.

The walled plateau is also the holiest site for Jews, who refer to it as the Temple Mount, because it was the location of biblical temples. Romans destroyed the Second Temple in 70 A.D., with only the Western Wall remaining. The mosques were built centuries later.

Neighboring Jordan serves as the custodian of the site, which is operated by an Islamic endowment known as the Waqf. The site is open to tourists during certain times but only Muslims are allowed to pray there. The Western Wall is the holiest site where Jews can pray.

In recent years, groups of religious and nationalist Jews escorted by police have been visiting the compound in greater numbers and holding prayers in defiance of rules established after 1967 by Israel, Jordan and Muslim religious authorities. The Palestinians view the frequent visits and attempted prayers by Jews as a provocation, and it often ignites scuffles or more serious violence.

Some Israelis say the site should be open to all worshippers. The Palestinians refuse, fearing that Israel will eventually take over the site or partition it. Israeli officials say they have no intention of changing the status quo.

Jews born in east Jerusalem are Israeli citizens, while Palestinians from east Jerusalem are granted a form of permanent residency that can be revoked if they live outside the city for an extended period. They can apply for citizenship, but it’s a long and uncertain process and most choose not to because they don’t recognize Israeli control.

Israel has built Jewish settlements in east Jerusalem that are home to some 220,000 people. It has severely limited the growth of Palestinian neighborhoods, leading to overcrowding and the unauthorized construction of thousands of homes that are at risk of demolition.

The Israeli rights group B’Tselem and the New York-based Human Rights Watch cited the discriminatory policies in east Jerusalem in recent reports arguing that Israel is guilty of the crime of apartheid. Israel rejects those allegations, saying Jerusalem residents are treated equally.

The recent nightly clashes began at the start of Ramadan, when Israeli police placed barriers outside the Old City’s Damascus Gate, a popular gathering place after the evening prayers during the holy month when Muslims fast from dawn to dusk. They later removed the barriers, but then protests escalated over the threatened eviction of dozens of Palestinian families from the east Jerusalem neighborhood of Sheikh Jarrah.

The families have been embroiled in a long legal battle with ideological Jewish settlers who seek to acquire property in crowded Palestinian neighborhoods just outside the Old City. Israel portrays it as a private real-estate dispute, but the families’ plight has attracted global attention.

Clashes in Jerusalem, and particularly in Al-Aqsa, often reverberate across the region.

The Palestinian militant group Hamas, which rules Gaza, has called for a new intifada, or uprising, like the one triggered by an Israeli politician’s visit to Al-Aqsa in 2000. Gaza militants have fired rockets and balloons with incendiary devices attached to them in support of the protesters as an informal cease-fire with Israel has started to fray.

Protests have been held in the occupied West Bank and in Arab communities inside Israel. A series of deadly shootings in the West Bank last week has also heightened tensions.

Jordan and other Arab nations that have friendly ties with Israel have condemned its crackdown on the protests, while Israel’s archenemy Iran has encouraged Palestinian attacks. The U.S. and the EU have condemned the violence and expressed concern about the evictions.