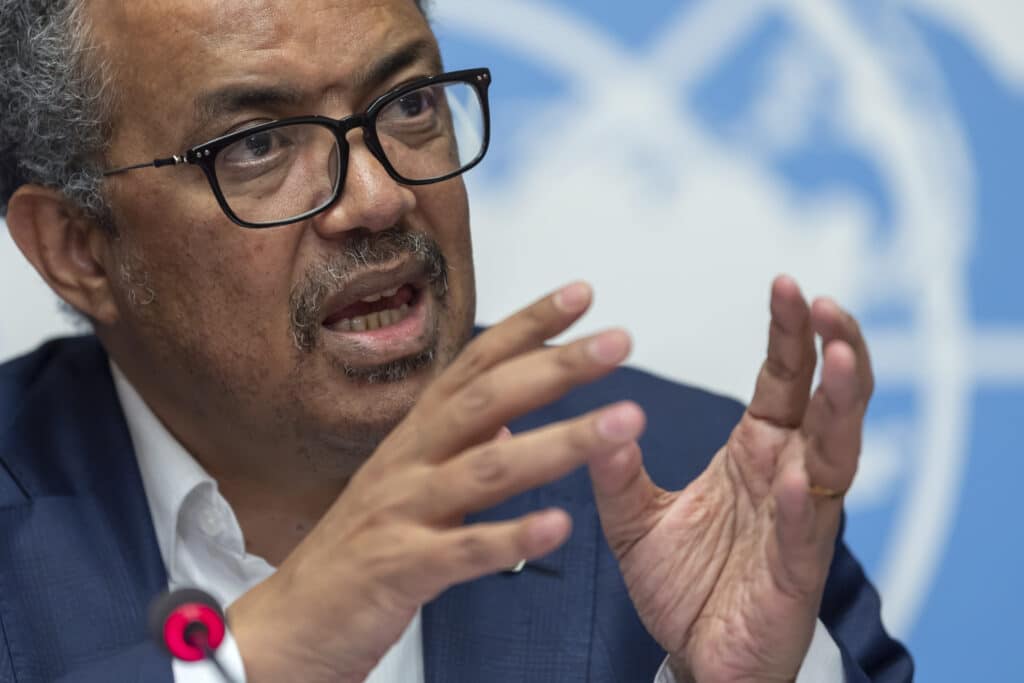 Although management at the World Health Organization knew there was extensive sexual misconduct going on within the agency during an Ebola outbreak in Congo, the agency was slow to react, WHO Director-General Tedros Adhanom Ghebreyesus said. It’s been over seven months since a panel was commissioned to investigate, yet no findings have been released. The Associated Press has the story:

LONDON (AP) — The head of the World Health Organization acknowledged the U.N. health agency’s response to sexual abuse allegations involving employees who worked in Congo during an Ebola outbreak was “slow,” following an Associated Press investigation that found senior WHO management knew of multiple cases of misconduct.

As the WHO’s highest decision-making body meets this week, countries were tackling subjects like how to reform the U.N. health agency’s emergencies program after its missteps in responding to the coronavirus pandemic. At its week-long meeting of countries, the WHO held a roundtable talk on preventing sexual abuse on Friday.

“In many ways, we’re all to blame for what happens in these situations,” said Dr. Michael Ryan, the WHO’s emergencies chief.

Diplomats have already pressed WHO Director-General Tedros Adhanom Ghebreyesus on the issue behind closed-doors. At least six countries raised concerns last week about how the agency was handling sexual abuse and exploitation, citing recent press reports. Tedros tried to allay their worries.

“I can understand the frustration,” he told a committee meeting of the WHO’s Executive Board on May 19. According to a recording of the meeting obtained by the AP, the director-general said it took time to deal with security problems in Congo, to install a commission to investigate sex abuse claims and to get the group up and running.

“The way this thing was run until now, although it was slow … I hope it will satisfy,” Tedros said.

The WHO’s press office declined to comment on Tedros’ description of a slow response but said the commission was “committed to conducting a comprehensive investigation into all recent allegations, including those relating to management actions.” The group’s co-chairs were asked to sign a confidentiality agreement with the WHO.

Law enforcement not included in the investigation

The panel commissioned by the WHO does not include any law enforcement agencies to investigate if any of the reported sexual exploitation was criminal and its reports will be submitted only to the WHO.

Tedros created the panel in October, after news reports surfaced about sex abuse during the WHO’s efforts to contain the Ebola epidemic in Congo from 2018 to 2020. At the time, Tedros said he was “outraged” and would move quickly to punish those responsible.

But more than seven months later, the panel has yet to publicly release any details about its work or findings. The commission began its work in Congo on May 3 and expects to publish a report at the end of August, the group said.

“We expressed alarm at the suggestions in the media that WHO management knew of reported cases of sexual exploitation and abuse, and sexual harassment and had failed to report them, as required by U.N. and WHO protocol, as well as at allegations that WHO staff acted to suppress the cases,” the joint statement said.

The United States, addressing the assembly Friday, urged other countries to hold the WHO accountable for its management of sex abuse claims; Canada, Australia, Britain, New Zealand and Mexico were among the countries that signed the statement.

Simon Manley, Britain’s ambassador to the U.N. in Geneva, called for the WHO to reconsider issues including whether the U.N.’s internal oversight office should be involved in probing sex abuse claims and to clearly explain what the process would be for sharing its investigation results with member countries. Manley said earlier reports “lacked detail” and should have been shared earlier.

WHO knew of sexual abuse claims in 2019

“We must from now on see much more transparency from the WHO,” he said.
An AP investigation published earlier this month found members of the WHO’s senior management were told of sexual abuse concerns in 2019 involving at least two doctors employed by the agency during the Ebola epidemic in Congo.

The AP obtained a notarized contract showing two WHO staff members signed off on an agreement by Dr. Jean-Paul Ngandu to pay off a young woman he reportedly impregnated. Another doctor, Boubacar Diallo, bragged of his relationship with WHO chief Tedros and offered women jobs in exchange for sex, three women told the AP.

Even some WHO staffers appear unsatisfied at how the agency has handled the claims.
“We cannot afford to ignore signs of repeated, systemic failure of our Organization to prevent such alleged behaviors and to address them in a just and timely manner,” the WHO staff committee wrote in an email to staff and senior management last week. The committee urged WHO directors to take immediate action over the allegations, including reports that “senior management may have suppressed concerns.”

“Now that WHO is considered a beacon to help us find our way out of this pandemic, it is so disheartening to learn about allegations of structural mishandling of cases of misconduct,” a representative of the Dutch government said, according to a meeting recording. “Reading the (press) articles made us doubt whether the many statements and discussions we have had (at the WHO about sex abuse) have been truly heard.”

The representative from the Netherlands called for more transparency to address “the gap in trust that is starting to emerge in this area.”

Dr. Catherine Boehme, Tedros’ Cabinet chief, responded that “some issues are still a work in progress.” She said WHO officials would soon meet with the commission investigating the Congo sex abuse allegations to discuss “the investigation around failure to report or active suppression, including the allegation of a cover-up.”

“We know there are weaknesses in the system, whether it’s the WHO or the U.N. system,” added Dr. Ibrahima Soce Fall, the WHO’s assistant director-general for emergency response.
Some experts said the WHO’s failure to quickly punish those involved in sexual misconduct was disappointing, but not surprising.

“Aid organizations are operating in an accountability vacuum, in contexts where law and order has broken down and where there are no external systems able to hold them to account,” said Asmita Naik, an international human rights consultant who co-authored a report on sexual exploitation involving U.N. personnel.

“Things will not change until those who perpetrate abuse or turn a blind eye are disciplined and conversely, those who speak up are rewarded,” Naik said.

By MARIA CHENG
Jamey Keaten in Geneva contributed to this report.