Will WHO approve Russian’s COVID-19 vaccine? 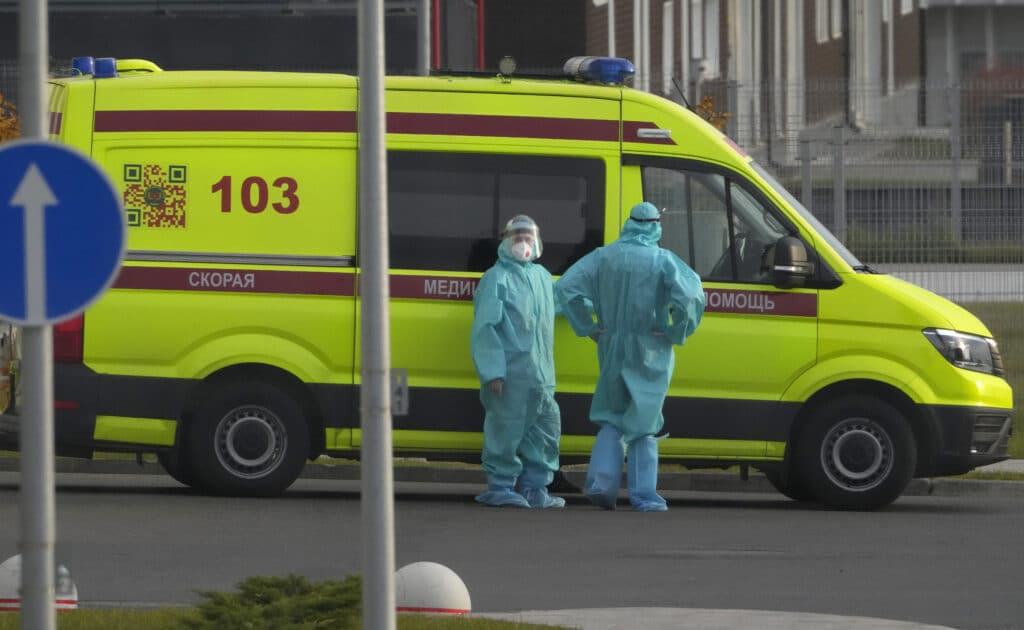 Russia is offering its Sputnik V Covid-19 vaccine to the U.N.’s COVAX initiative, but the World Health Organization hasn’t approved of it yet, not even for emergency use. However, it’s been used in 70 countries around the world. The Associated Press has the story:

MOSCOW (AP) — Russia is ready to provide up to 300 million doses of its Sputnik V vaccine to the U.N.-backed COVAX initiative, a top Russian official promoting the shot says, even though the World Health Organization hasn’t yet signed off on it and production issues have fanned customers’ concerns worldwide.

Russian Direct Investment Fund CEO Kirill Dmitriev and the World Health Organization had vastly different takes Wednesday on when the Russian vaccine would get WHO’s stamp of approval.

Sputnik V has been authorized for use in 70 countries around the world despite not yet being approved by the U.N. health agency even for emergency use. Some countries, especially in Latin America, have expressed fears lately that they are not getting the vaccine’s second shot in time to properly innoculate their people from COVID-19.

Dmitriev told The Associated Press that the Russian vaccine will be made available to COVAX, the U.N.-backed program designed to share vaccines more evenly around the world, once the shot is approved by the WHO. He said he expects WHO’s approval to come in the next two months. The COVAX program cannot use a vaccine that is not approved by the WHO.

“We believe that we can supply COVAX around 200 million doses a year, 200 to 300 million,” Dmitriev said in an interview. “We just need the WHO approval to work with COVAX.”

But Dr. Mariangela Simao, the WHO’s assistant director-general for access to health products, wouldn’t make any commitment to that timetable. She said the approval process for Sputnik V is currently on hold, and once the legal procedures are sorted out, “we will reopen the assessment, which includes the submission of the data in the dossier — it’s still incomplete — and resuming the inspections in the sites in Russia.”

“The timeline will depend when we get these legal procedures done and then we will be able to assess, with the applicant and the manufacturer, what would be the next step and how long it will take,” Simao said at a briefing in Geneva. “So we don’t know yet.”

Dmitriev’s comments came even as Russia has run into delays in providing the contracted amounts of Sputnik V to countries in Latin America and is facing a surge in infections and record-breaking daily virus deaths at home amid a slow vaccination rate.

Dmitriev, however, insisted that Sputnik shipments to Latin American nations are back on track.

“All those issues have been fully resolved,” Dmitriev told the AP. “All of the issues with the second component are resolved in all of the countries.”

Despite his assurances, countries such as Argentina and Venezuela said they are still waiting for the promised vaccine shipments.

Dmitriev argued that “there is not one vaccine manufacturer in the world that didn’t have vaccine delivery issues.” including Russian plants making Sputnik V.

He claimed that by year’s end, there will be the capacity to produce 700 million doses of Sputnik V and its one-shot version, Sputnik Light. He said 50% of the output will come from abroad through partnerships with more than 20 manufacturers in more than 10 countries.

Dmitriev said a new study conducted by the vaccine’s developer shows that Sputnik Light, a one-shot version of Sputnik V, was 70% effective against infection with the delta variant of the coronavirus during the first three months after vaccination. But the study he cited was not made available and has not been reviewed by outside experts, so it is not possible to verify the results. Dmitriev’s fund said the study was submitted for eventual publication online.

Dmitriev noted that Russia has a three-month vaccine stockpile, allowing it to boost exports now, and hailed Sputnik V’s reported efficacy and the lack of side effects.

The European Medicines Agency’s expedited approval for Sputnik V began in March. Experts from the EMA visited some of Sputnik V’s manufacturing sites earlier this year and the agency said further visits could be required depending on additional data submitted.

The EMA’s head of vaccines strategy, Marco Cavaleri, said last month the agency was still waiting for some outstanding data from Russia. He noted that the timeline for a decision was “uncertain,” but estimated the EMA might make a decision on Sputnik V by the end of the year.

Russia, meanwhile, reported another record daily coronavirus deaths amid a slow vaccination rate and authorities’ reluctance to tighten restrictions to stem the spread of the virus.

The government coronavirus task force reported 984 coronavirus deaths over the past 24 hours, the pandemic’s new high. Russia has repeatedly marked record daily death tolls over the past few weeks as infections soared to near all-time highs, with 28,717 new cases reported Wednesday.

The Kremlin has attributed the mounting contagion and deaths to a lagging vaccination rate. Prime Minister Mikhail Mishustin said Tuesday that about 43 million Russians, or 29% of the country’s nearly 146 million people, were fully vaccinated. Experts say vaccine skepticism and vaccine disinformation are widespread in Russia.

Dmitriev attributed the low vaccination uptake to Russians widely underestimating the danger of COVID-19, which is already straining hospitals in some regions.

“Russia was a little bit victim of its own success, because early on it was very successful in fighting COVID,” Dmitriev said. “Many people basically assumed that COVID is already defeated, but then the delta variant came and it’s a big challenge.”

Russian President Vladimir Putin has emphasized the need to speed up the vaccination rate, but he also has cautioned against forcing people to get vaccine shots. The Kremlin has also ruled out a new nationwide lockdown like the one during the first months of the pandemic, which badly crippled the economy and dented Putin’s ratings.

Some Russian regions have restricted attendance at large public events and limited access to theaters, restaurants and other places. But life remains largely normal in Moscow, St. Petersburg and many other Russian cities.

Overall, Russia’s coronavirus task force has confirmed 219,329 deaths — the highest death toll in Europe. The state statistics agency Rosstat, which also counts deaths where the virus wasn’t considered the main cause, has reported a much higher toll — about 418,000 deaths of people with COVID-19.

Both those numbers put Russia among the top five hardest-hit nations in the pandemic, along with the United States, Brazil, India and Mexico.