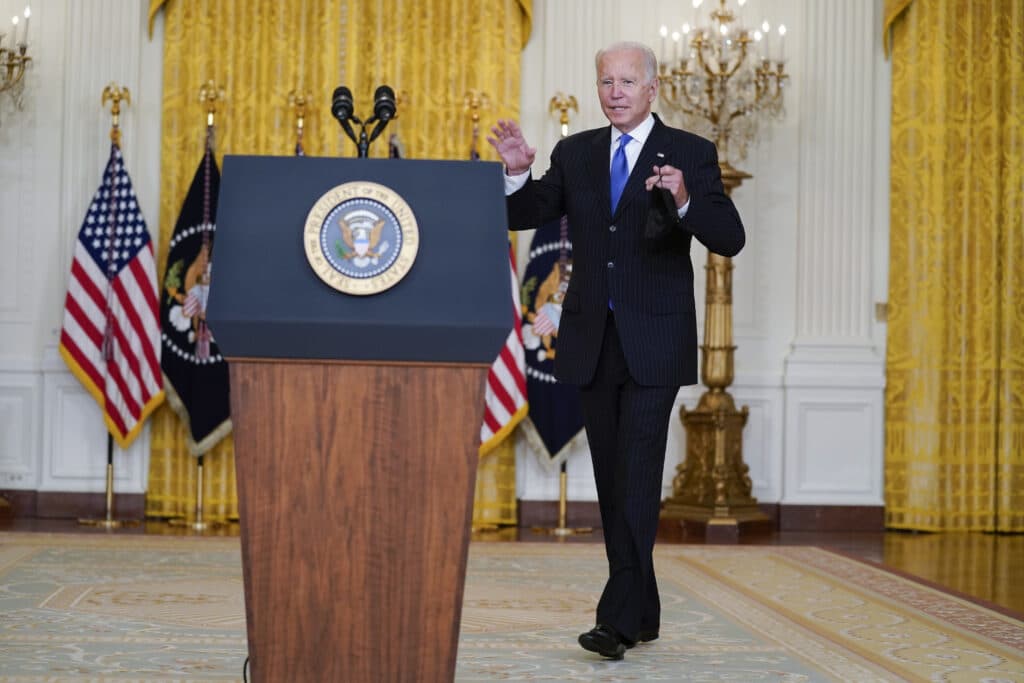 In an unusual move, the Biden administration expanded operations at the Port of Los Angeles to run around the clock all day and night in order to fight inflation. There is currently a backlog at ports with ships stranded waiting. The Associated Press has the story:

WASHINGTON (AP) — President Joe Biden tried to reassure Americans on Wednesday that he can tame high inflation, announcing a deal to expand operations at the Port of Los Angeles as prices keep climbing and container ships wait to dock in a traffic jam threatening the U.S. economy and holiday shopping.

Prices are jumping in large part because container ships are stranded at ports and because unloaded goods are waiting for trucks, leading to mass shortages and delays that have caused a longer than expected bout of inflation. The rising costs are eating into worker pay, creating a drag on growth and driving Republican criticism of Biden just as his multitrillion-dollar tax, economic, climate and infrastructure agenda is going through the crucible of congressional negotiations.

The White House responded to the backlog by finalizing an agreement for the Port of Los Angeles to become a 24-hour, seven-days-a-week operation. The hope is that nighttime operations will help to break the logjam and reduce shipping delays for toasters, sneakers, bicycles, cars and more.

“With holidays coming up, you might be wondering if the gifts you plan to buy will arrive on time,” Biden said at the White House. “Today we have some good news: We’re going to help speed up the delivery of goods all across America.”

But the expansion of port operations was also an unspoken recognition that inflation is lingering at higher levels long after the economy began to reopen from the coronavirus pandemic. Businesses were worrying about monthslong delays for shipping containers in June, yet the administration only formed its supply chain task force that month and named a port envoy on Aug. 27 to address the challenge.

Ports are also just one piece of the puzzle, Biden said. The country needs more truck drivers, private retailers to step up and better infrastructure, as well as a supply chain that can less easily be disrupted by pandemics and extreme weather. The president is trying to use the predicament as a selling point for his policy plans that undergoing congressional scrutiny.

“We need to take a longer view and invest in building greater resiliency to withstand the kinds of shocks we’ve seen over and over, year in and year out, the risk of pandemic, extreme weather, climate change, cyberattacks, weather disruptions,” he said.

The sense of uncertainty is beginning to consume the attention of many Americans.

University of Michigan economist Betsey Stevenson noted on Twitter the “economy is in a very fragile and unprecedented place.” Prices are rising at more than 5%, trade in goods and services have slowed and more Americans are quitting their jobs while the delta variant has made the coronavirus pandemic a risk.

“No one really knows what’s going to happen,” wrote Stevenson, a former member of the White House Council of Economic Advisers under President Barack Obama.

Ports in Los Angeles and Long Beach, California, account for 40% of all shipping containers entering the United States. As of Tuesday, there were 64 ships berthed at the two ports and 80 waiting to dock and unload, according to the Marine Exchange of Southern California.

Commitments by the Los Angeles port’s operator, longshoremen and several of the country’s largest retail and shipping companies are expected to help relieve the backlog.

Walmart, FedEx, UPS, Target, Samsung and The Home Depot committed to unloading during off-peak hours, making it easier for the Los Angeles port to operate nonstop. The Long Beach port has been operating 24 hours daily for seven days for roughly the past three weeks.

Biden also held a virtual roundtable with the heads of Walmart, FedEx Logistics, UPS, Target, Samsung Electronics North America, the Teamsters Union and the U.S. Chamber of Commerce, among other groups, before his speech.

Senate Republican leader Mitch McConnell of Kentucky has made inflation one of his central charges against Biden, a sign that getting prices under control could be essential for Democrats trying to hold onto congressional seats in next year’s elections.

“The Democrats’ inflation is so bad that even though the average American worker has gotten a multiple-percentage-point pay raise over the last year, their actual purchasing power has been cut,” McConnell said in a Senate speech last week. “Even dollar stores are having to raise their prices. Just ask any American family about their last few trips to the supermarket, the gas station or the toy store. Heaven forbid if they’ve had to participate in the housing market or the auto market anytime lately.”

The Biden administration has argued that higher inflation is temporary. Yet the supply chain issues have persisted months after the economy began to reopen and recover as vaccines lessened many of the risks from the pandemic.

Consumer prices climbed 5.4% from a year ago, the Bureau of Labor Statistics reported Wednesday. That is significantly above the Federal Reserve’s 2% target. Higher energy, food and shelter costs were prime drivers of price increases in September.