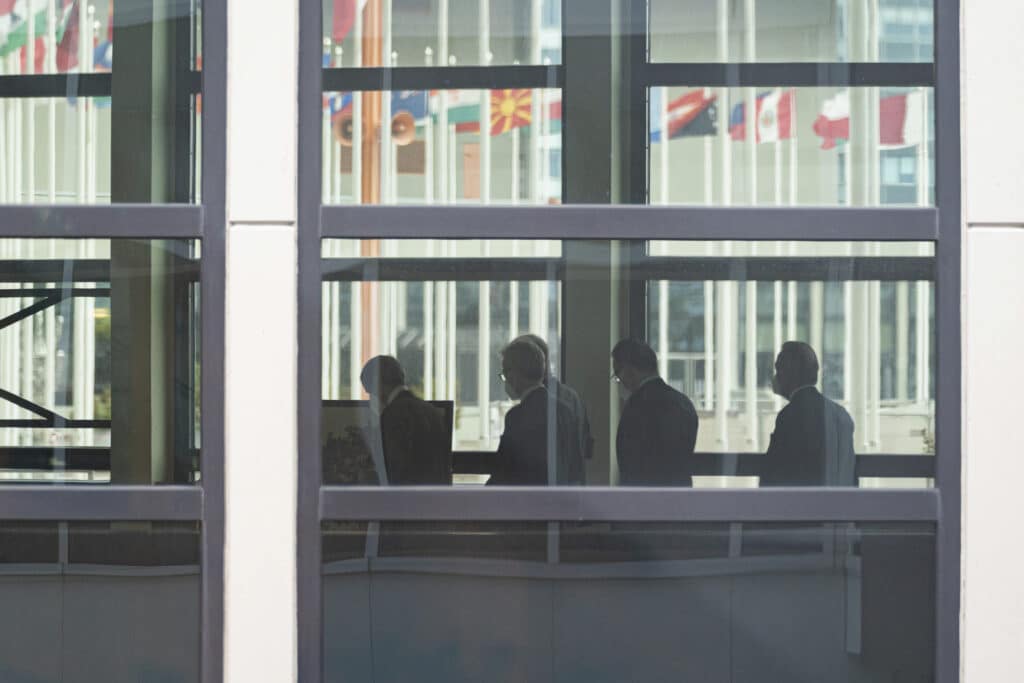 Talks continue between Iran and nations trying to restart the 2015 Iran nuclear deal after the U.S. pulled out under President Trump. Iran just agreed to a one-month extension on keeping surveillance cameras at its surveillance sites as the talks continue. The Associated Press has the story:

VIENNA (AP) — World powers opened a fifth round of talks with Iran aimed at bringing the United States back into the landmark 2015 nuclear deal meant to prevent the Islamic Republic from obtaining an atomic bomb, with both sides expressing hope Tuesday that it might be the final series of negotiations.

The talks in Vienna came the day after the U.N.’s nuclear watchdog, the International Atomic Energy Agency, struck a last-minute agreement with Tehran for a one-month extension to a deal on surveillance cameras at Iran’s nuclear sites. The issue wasn’t directly related to the ongoing talks on the nuclear accord, known as the Joint Comprehensive Plan of Action, or JCPOA, but if Iran had not agreed it could have seriously complicated the discussions.

The U.S. is not directly involved in the talks, but an American delegation headed by President Joe Biden’s special envoy for Iran, Rob Malley, has been in the Austrian capital. Representatives from the other powers involved — Germany, France, Britain, Russia and China — have shuttled between the Americans and the Iranians to facilitate indirect talks.

Following a Tuesday afternoon meeting of the so-called Joint Commission, Russian delegate Mikhail Ulyanov, who has consistently been the most optimistic about the possibility of an agreement that would get the U.S. to rejoin the nuclear deal , suggested a resolution was in sight, calling it “the fifth and probably final round of the Vienna talks.”

“The participants expressed readiness to do their best to resolve the remaining outstanding issues and to complete negotiations successfully as soon as possible,” he tweeted.

Iran’s delegate to the talks, Deputy Foreign Minister Abbas Araghchi, told Iranian state television as he headed into the session that following “good progress in the last four rounds of talks” he hoped the fifth would be the last.

Related: Prisoner Swap Talks Between US and Iran

“There are still important issues that need to be fixed,” he said. “We hope that we will be able to reach a final solution during these several days of negotiations.”

Malley was more non-committal as he headed back to Vienna, tweeting that the previous round had been “constructive and saw meaningful progress.”

“But much work still needs to be done,” the U.S. envoy wrote. “On our way to Vienna for a fifth round where we hope we can further advance toward a mutual return to compliance.”

In 2018, then-President Donald Trump pulled the U.S. out of the agreement unilaterally, saying it was not broad enough and needed to be renegotiated. As part of a “maximum pressure” campaign, Trump reimposed sanctions on Iran in an effort to bring Tehran back to the table.

The sanctions crippled Iran’s economy, but the Iranian government refused to renegotiate and instead retaliated by slowly and steadily breaking the restrictions on its nuclear activities laid out in the JCPOA. The move was designed to pressure the other parties involved, thus far unsuccessfully, to come up with incentives to offset the U.S. sanctions.

Biden, who was vice president when the original deal was negotiated, has said he wants the U.S. to rejoin but that Iran has to return to complete compliance. Iran has insisted that all American sanctions imposed under Trump be dropped, including measures that were taken in response to non-nuclear issues.

In Jerusalem on Tuesday, Secretary of State Antony Blinken defended the decision to re-engage with the Iranians and said the U.S. has kept Israel and other partners informed throughout the process. Israel, a close ally, has opposed efforts to revive the nuclear deal, saying it does not have adequate protections to prevent Iran from developing nuclear weapons.

“What have we seen since we pulled out of the agreement? Well, Iran has stopped abiding by some of the critical constraints in the agreement. And as a result, it is far closer today to the ability to produce fissile material for nuclear weapons in short order than it was even before the deal was reached. And certainly, during the dependency of the deal itself.”

Iran’s violations since the U.S. withdrawal from the deal include a significant increase in the purity and quantity of uranium it has been enriching, effectively reducing the so-called break-out time to produce an atomic bomb. Iran says it does not want to build an atomic bomb, insisting that its nuclear program is for civilian purposes only.

Iran has enriched uranium at as high as 60% purity

Though the West fears it could be used to help Tehran potentially obtain an atomic bomb, U.S. intelligence agencies have said they “assess that Iran is not currently undertaking the key nuclear weapons-development activities… necessary to produce a nuclear device.”

Despite Iran’s violations of the JCPOA, the other nations involved have stressed that the agreement was still important as it allowed International Atomic Energy Agency inspectors to continue their surveillance of Iran’s nuclear facilities.

The continuity of that surveillance was threatened until the agreement negotiated by the IAEA with Iran on Monday.

Under a confidential agreement called an “Additional Protocol” with Iran, the IAEA collects and analyzes images from a series of surveillance cameras installed at Iranian nuclear sites. Those cameras helped it monitor Tehran’s program to see if it is complying with the nuclear deal.

Iran’s hard-line parliament in December approved a bill that would suspend part of U.N. inspections of its nuclear facilities if European signatories didn’t provide relief from oil and banking sanctions by February.

Speaking at a news conference Monday in Vienna as the deal was due to expire, IAEA Director-General Rafael Grossi told journalists Iran had agreed to a one month extension, though his agency still cannot access the images taken by the cameras for the time being.

“I’d want to stress this is not ideal,” Grossi said. “This is like an emergency device that we came up with in order for us to continue having these monitoring activities.”

By DAVID RISING and PHILIPP JENNE