A Life in Conflict One Marine’s Journey: Part III

Andrew Milburn
10 posts
Retired in 2019 as the chief of staff of Special Operations Command Central, He is on the adjunct faculty of the Joint Special Operations University & a fellow of the Modern War Institute. He also teaches courses overseas to officers from countries across Africa, the Middle East and Asia. 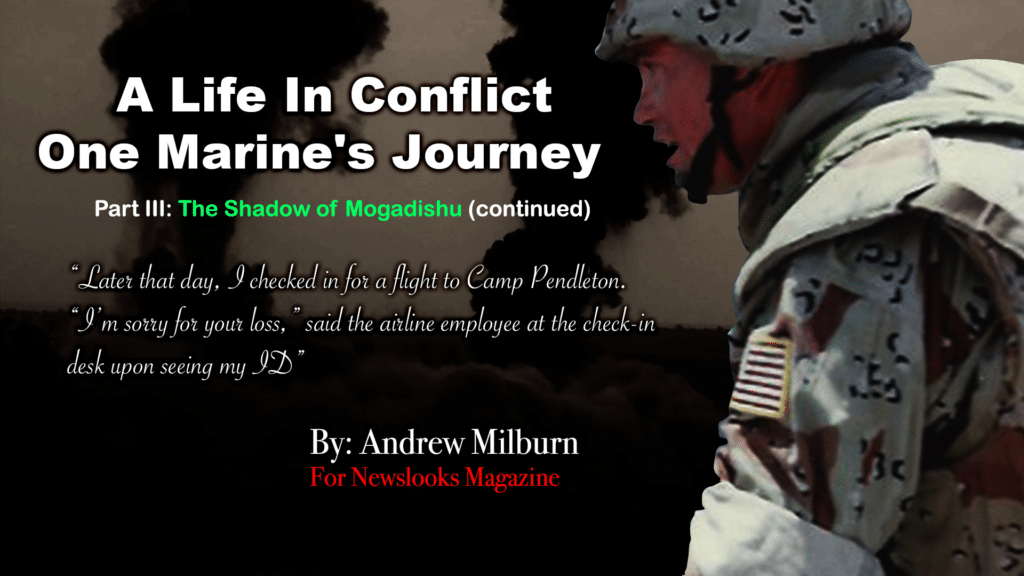 The Shadow of Mogadishu (continued)

After the cinematic melodrama of the initial landing, my platoon was assigned a sector of the city that was to prove to be the most volatile: the ‘Green Line’, a road that delineated the boundary between the city’s two most powerful and antagonistic warlords: Mohammed Farah Aidid and Ali Mahdi Muhammad. Our patch also included the Hotel Olympic, scene several months later of the infamous ‘Blackhawk Down’ confrontation in which eighteen American soldiers were killed.  It was an awe-inspiring experience for a young lieutenant, made all the more so by my platoon’s relative isolation. Soon after assuming responsibility for our area of operations, the rest of the battalion departed on a relief convoy inland, leaving my platoon several miles away from the nearest US combat unit.

Most of Mogadishu was controlled by Aidid, and his militia, the self-proclaimed Somali Liberation Army or SLA. However, the district immediately around the port belonged to Ali Mahdi, the nominal President of Somalia and Aidid’s arch-rival. The SLA surrounded this enclave, cutting its inhabitants off from the city’s markets and sources of water. To help the locals, we distributed supplies appropriated from cargo being offloaded at the docks, and with a group of volunteer medics set up makeshift aid stations during our patrols through the area.

Despite these efforts, or perhaps because of them, someone started to shoot at us within days of arrival. At first, we thought these incidents were the result of crossfire between the warring clans but it soon became evident that we were being targeted. Bob Simon and his team from CBS News captured on film one fusillade of hostile fire that had me and two other Marines pinned to a roof top during a tense stand-off. Bob was engaging company, and his team became good friends with the platoon, allowing them to call home on their satellite phones – and, unbeknownst to me at the time – supplying them with bottles of whiskey. They were part of a widening group of journalists who began to gather at the port to cover the fighting along the Green Line, as the novelty of the relief effort wore off. I was soon to have every reason to be grateful for their presence.

After the incident in which we returned fire, I was for all intents and purposes assigned placed under custody by higher headquarters, the Marine Expeditionary Force which had taken command of a rapidly burgeoning operation, while an investigation of the incident took place. I was questioned about my decision to shoot.  My Marines were questioned separately, and their rifles confiscated.   By then I was beginning to doubt my own version of events.  Had I overreacted? Maybe I’d been overly aggressive in a situation that demanded maturity.

Reprieve came from an unlikely source. An AP photographer appeared with pictures that showed the entire episode in a neat sequence of frames.  Like pages in a kid’s flicker book, the gunner in the florid shirt swings the machine gun in a blurred arc before collapsing on the bed of the truck as bullets kick up spurts of dust in the background. And that wasn’t all. The photographs also show several gunmen in the undergrowth surrounding the building, also pointing their weapons towards us. I had acted just in time.

Karl Maier was a journalist covering the operation in Somalia for the UK’s Independent newspaper. Writing about our brush with Aidid’s militia, he commented:

‘A decision on how to react to a challenge from one of the warring factions often had to be made in a split second by an officer in his mid-20s who was never sure if his superiors would support the action.’

It was an early lesson for me of a phenomenon that became commonplace later in my career: the high level of scrutiny given to tactical decisions made in the heat of the moment; and the narrow margin in such cases between censure and approbation. Years later, on the tarmac of Tripoli airport and on the outskirts of Mosul, I would walk again this same fine line. At the time, I felt hard done by to be treated as a war criminal for an act of self-defense, but in retrospect, realize the rationale behind holding me to account.  In a peace enforcement operation – and Somalia was the first such operation – it is critical not to be seen to take sides. It was an imperative that would later be ignored by the UNOSOM headquarters that succeeded the MEF – with tragic consequences.

As the battalion re-embarked on ship, I remained ashore for two weeks as a liaison to a newly arrived Pakistani Brigade, part of the United Nations task force. Two months after we left, the SLA ambushed a company from this brigade as they searched the Radio Mogadishu compound, killing twenty-three and wounding sixty. It was the beginning of a cycle of clashes between UN forces and the SLA that led to the debacle of Task Force Ranger in October, the subsequent withdrawal from Somalia of US forces, and the collapse of the UN mission.

The rapid slide from successful peace enforcement to disastrous combat operation began with a transition of responsibility from UNITAF, formed around the headquarters of a Marine Expeditionary Force, to the UN force that followed it, known as UNISOM II.   In the transition was lost a clear answer to four questions that are the central tenets of any successful operation:  Who shall command? With what forces?, By What Means, and To what end?

Also lost was the mindset essential to peace enforcement operations (and counterinsurgency) as distinct from combat. It’s the mindset that looks at the local population as a potential ally rather than the enemy, gives warnings before the application of force, limits the use of force to the minimum required and constantly seeks to engage in dialogue while resisting an adversary’s attempts to solicit overreaction.  A mindset that understands that in a place like Somalia forcible disarmament is the redline of peace operations — when you cross it, you have entered a de facto state of war – a fact that UNISOM realized all too late.  It was the deputy commander of UNISOM II Major General Montgomery who remarked with unintended irony:  “If this isn’t combat then I’m sure having a helluva nightmare.”

Operation Restore Hope saved thousands of Somali lives and diverted disaster – that much is undisputed but also unheralded.  As is so often the case, the American public only saw one side of the ledger – the 18 US servicemen killed, not the estimated 1000 Somalis who died during the battle. Heavily armed men in fear for their lives seldom act with restraint. And in the subsequent two decades, as a radical Islamic insurgency took hold, and without a counter-narrative, it was likely those deaths rather than the lives saved that remained forefront in the memory of most Somalis.

The decision to withdraw was a strategic blunder whose reverberations continue even now. It was a decision that led to the subsequent rise of al Shabaab, now in a position of dominance in East Africa.  More importantly, the image of a great power turned in its tracks by the death of 18 soldiers emboldened a nascent al Qaeda to strike directly at the far enemy — from the bombings of the US embassies in Tanzania and Nairobi at the end of the decade, through the attack on the USS Cole in 2000 to 9/11.  In turn, as the pendulum swung the other way, it was a decision that led eventually to the interminable wars in Afghanistan and Iraq.

After the fall of Kabul, one can hope that the current administration has learned that each case of potential intervention must be decided on its own merits and a weight of factors – to include understandings of national interest and America’s role in the world.  More likely however the pendulum will swing too far the other way, until we learn again the folly of absolute non-engagement.  Hopefully this time that lesson won’t come at so high a cost.